Notes: Jabrill Peppers hopes 1st interception of camp is 1st of many turnovers he forces this year 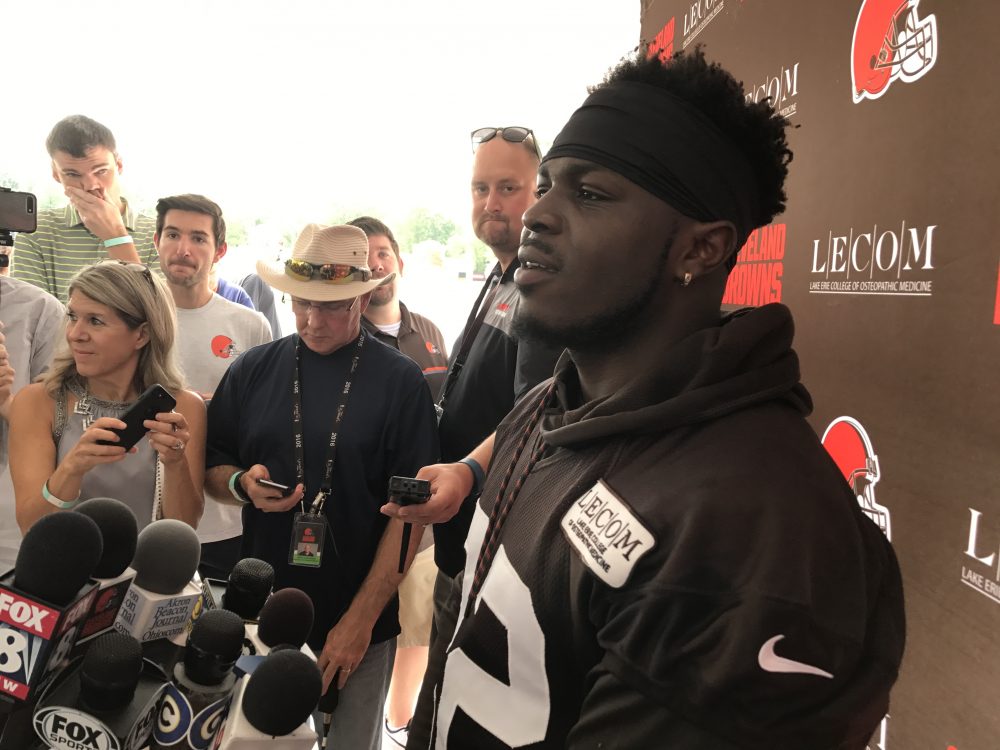 BEREA – Jabrill Peppers had one interception and zero fumbles forced or recovered in three years at Michigan. After getting his first turnover of training camp Monday with an interception of Brock Osweiler, he vowed to do much better in that category than he did with the Wolverines.

“That’s something that can and will be corrected,” Peppers said Tuesday before practice. “The guys here believed in me, and it’s just time to show them what they saw in me.”

Peppers, the No. 29 pick, is used to explaining the lack of picks with the Wolverines. He said every NFL team asked about it during the predraft process.

“I had my opportunities,” he said. “We played a lot of man my freshman year. I didn’t get my head around fast enough. I dropped a couple.


“But the past year, I was playing more linebacker. My job was more in the run game and to take away athletic tight ends. I didn’t get many chances, but I did get some chances and I missed those opportunities.”

Peppers had his best day of training camp Monday with a three-play stretch of two pass breakups and the interception as he spent the day working with the starting defense. He also had a fierce helmet-to-helmet hit of receiver Rannell Hall.

“There’s a lot of things I could still do better,” said Peppers, who remained with the first team Tuesday. “I showed flashes of what I can do, but I’ve still got a lot to improve on. It was good to finally get a turnover, to finally just play ball. I just feel like there’s still a lot of work that needs to be done.”

Coach Hue Jackson said Peppers has proved he can play free safety in the deep middle of the field after being close to the line a lot at Michigan. Coordinator Gregg Williams said he can do so much more.

He’s already used him at both safety spots and both outside linebackers spots and might try him at middle linebacker. He’s also returned punts and kickoffs and taken snaps as a wildcat quarterback.

“He has done very well. He has adapted very well,” Williams said. “Do you know the definition of what kind of position he is playing? He is a football player. He can play football.

Special teams coordinator Chris Tabor has high hopes for Peppers in the return game, and he’s listed as the first-team punt returner and kickoff returner on the unofficial depth chart.

“He is pretty dynamic at it,” Tabor said. “I think when he was born, there was probably a football right next to him. It is just an innate ability for him. He understands and his football intelligence is extremely high.”

Running back Isaiah Crowell is eligible to be a free agent after the season and is expected to command big money. Executive vice president of football operations Sashi Brown was asked in an interview on WKRK 92.3-FM if his philosophy could include spending significant money on the position.

“We are willing to invest, and really in any position that’s on the field,” Brown said. “It’s just too hard to find great players in this league.

“The running back position is tough. There’s no bitterness if we end up having to pay a guy money at the top of the market, because that means he’s one of the better players in the league, and I think Crow’s got a great opportunity to come out and do that.”

“He has all of the physical tools,” Wilson said. “He has what all of the good ones have, the special ones. He has great vision, outstanding instincts and the ability to change directions that are on par with anyone in this league.

“The physical tools are there. The work ethic arrived last year, and this year, he is taking it to another level because he is hungry. When someone is hungry and he wants something so bad, that is what you see. You see a guy who plays desperate because they want something so bad.”

Quarterback Brock Osweiler was an afterthought when Brown traded for him in March. Now Brown expects him to be here when the season starts in September.

“It would be surprising if Brock wasn’t on the roster,” Brown said. “He brings some experience, but we’re not going to get into cutting the team at this point. Brock’s done a nice job coming in.”

CBS Sports added play-by-play announcer Beth Mowins to its NFL lineup and she will become the first woman to do NFL play-by-play for CBS when she teams with new analyst Jay Feely for the Browns-Colts game Sept. 24.

** Rookie defensive tackle Caleb Brantley missed practice with a shoulder injury. He returned to team drills Sunday after having surgery to repair a broken finger.

** Offensive lineman Cameron Erving had another false start and ran another lap.

** No. 1 pick Myles Garrett chased running back Matthew Dayes 65 yards down the field after a short completion.