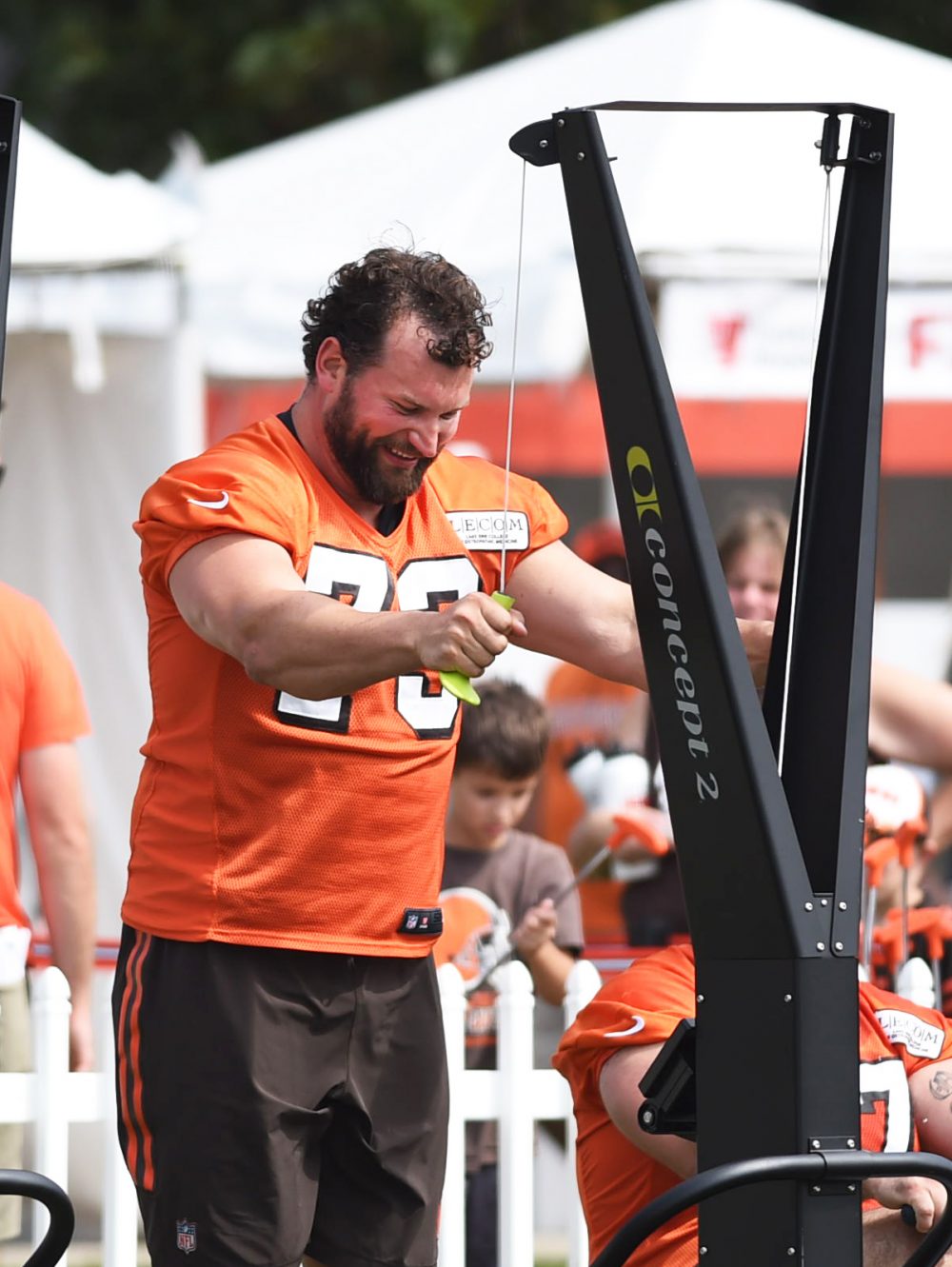 BEREA — Whether coach Hue Jackson picks veteran Brock Osweiler or rookie DeShone Kizer, Pro Bowl left tackle Joe Thomas will block for the 10th different opening-day starting quarterback in his 11 seasons.
Thomas has an expectation and preference and made them clear Wednesday before practice.
“It is a competition, but I would expect Brock to win because of his experience,” Thomas said. “And a rookie quarterback is the hardest position to get ready to play in your first year.

“I definitely would expect probably Brock to win it just because my personal philosophy is as a quarterback it takes at least two or three years to have a basic level of understanding of NFL defenses and offenses to be able to operate proficiently out there on the field, especially in Week 1. That would be asking a lot. Now I could be totally wrong. I might be going out on a limb here, but I think that they’re grooming Brock to be the starter in Week 1 based on what I’ve seen.”
Jackson announced Wednesday after practice Osweiler will remain the starter for the second preseason game Monday against the New York Giants. Kizer has been bumped up to No. 2 and will play in the first half, followed by Cody Kessler and Kevin Hogan.
“Doesn’t mean anything for the regular season,” Jackson said. “This is this game.”
Jackson said Osweiler “deserves to walk out there first” but wants to see Kizer earlier against better competition.
“I will give him an opportunity there to showcase his talent and ability,” he said.
Jackson wants to make a decision about the Week 1 starter against Pittsburgh before the third preseason game Aug. 26 at Tampa Bay.
“Hopefully we will have it all nailed down about exactly where we are headed,” he said. “Whoever trots out there has a very good chance of trotting out there against the Steelers.”
Thomas said Jackson consults with him and other team leaders before making big decisions like this.
“He wants to just get the pulse of the team,” Thomas said. “And 99 times out of 100 we’re on the same page, because everybody’s out there at practice, everybody’s watching the film, it becomes pretty clear on the direction of the decisions that he’s going to make.
“Certainly it feels good to have a coach that’s interested in getting as many people’s input on his big decisions.”
Jackson appreciates Thomas’ opinion but won’t necessarily follow it.
“That is good that he feels that way. That means Brock is doing some good things in the locker room and on the field,” Jackson said. “But I think Joe knows that I get to make that decision. There is a chance that could happen, and there is a chance that couldn’t happen. We are just going to work through it and keep going.”
Osweiler or Kizer would be the 27th quarterback to start for the Browns since their return in 1999. He would be the 19th quarterback to start since Thomas debuted in 2007 and the 23rd to play with Thomas, who hasn’t missed a snap. So he has plenty of experience with failure.
“I know that just because DeShone may be good in a few years doesn’t mean you want to throw him in before he’s ready,” Thomas said. “I’ve been on teams where they throw a guy in there because he’s a first-round pick or he’s the guy that the front office says, well, you’ve got to play this guy, and it doesn’t always work out for the player or the team. The team ends up usually losing and the player loses confidence in himself because they’re just not ready.
“The game is so complex at any position and the quarterback position, it’s so detailed and it takes such a level of competence, that it’s so difficult for a quarterback to be able to master that in only one training camp or one season. So while I think DeShone’s done an amazing job and he’s exceeded most people’s expectations, that doesn’t necessarily mean he’s ready to be the starter tomorrow. There’s still a lot of work that needs to be done before I think he’s ready, and you don’t want to see a guy lose his confidence and lose his swagger by being played before he’s ready.”
Osweiler moved into the first spot in the rotation last week before starting the preseason opener against the Saints. The first-team offense didn’t get a first down until the fourth possession, and Osweiler finished 6-for-14 for 42 yards and a 50.3 rating.
“He has done a good job of managing our offense, putting people in the right spots and the right places,” Jackson said. “Brock is a pro. He has done this. He is not going to get fooled by many things.
“Obviously, he would be the first to tell you there are some throws he wants to make better, some things he wants to do better and he will work at those things.”
Kizer, the No. 52 pick out of Notre Dame, has split the first-team reps throughout training camp and moved up to No. 2 in the rotation Tuesday ahead of Kessler. Kizer led a fourth-quarter comeback against the Saints, going 11-for-18 for 184 yards, three sacks, a touchdown and a 114.1 rating.
“You see that confidence coming and I think that’s one of the most important things for a quarterback,” Thomas said of Kizer. “So in that respect I do think he’s making some nice progress and I’m excited for his future.”
He just doesn’t think the future is now.
Osweiler, 26, is 13-8 as a starter in five years in the league. He wasn’t expected to stick around when the Browns acquired him as part of a trade in March but has defied the odds.
“He’s got the ‘It’ factor when it comes to being a quarterback,” Thomas said. “He’s got the leadership and the understanding and the communication skills that it takes to be a starting quarterback. When he’s in the game and when he’s in the practice, it’s got that feel of an NFL quarterback.
“He’s got a passion for the game. He’s got enthusiasm and smarts and a will to win and desire to compete.”
And a strong endorsement from Thomas.