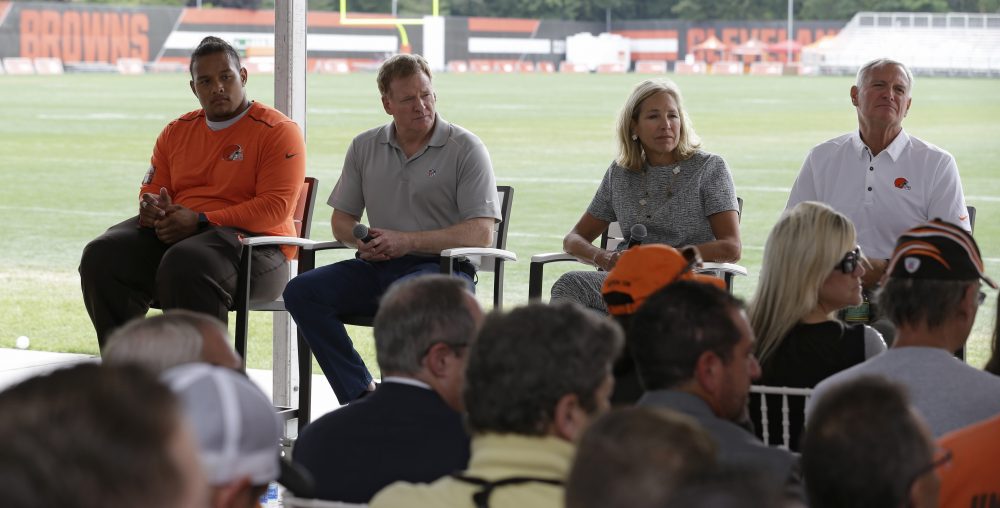 However, they believe they’re prepared to host the NFL Draft.

The team announced Thursday that it has partnered with the Pro Football Hall of Fame in Canton and Greater Cleveland Sports Commission to potentially host the annual three-day draft, which has swelled into a made-for-TV spectacle and showcase for the league — a virtual football-palooza.

The group delivered its application to league headquarters in New York last week, and as luck would have it, Commissioner Roger Goodell visited the team’s headquarters Thursday.

“I noticed that draft announcement on my way in,” Goodell said as he sat next to Browns owners Dee and Jimmy Haslam during a fan forum before the team’s final training camp practice. “Was that a coincidence?”

With their rich tradition, the Browns, who are coming off a 1-15 season and have been a staple at the top of the draft for several years, are eager to move back among the league’s model franchises. Hosting the draft might be one small step toward restoring the team’s glory.

Dee Haslam said landing the draft would not only be a major coup for Cleveland and its fans but would also provide an opportunity to showcase the football-obsessed region.

After years on the big stage at New York’s Radio City Music Hall, the draft has gone on the road the past few years, with stops in Chicago and Philadelphia, where Goodell was awed by a crowd estimated at 100,000 on the first night this year.

“The draft really has evolved, and it’s because of the passion and the interest in it,” he said. “I think they each bring their own twist to it, their own flavor, and I think that’s what’s really made it so special for us in the couple years we’ve been moving it around. And Cleveland, obviously, and Northeast Ohio, Canton, Ohio, it’s the birthplace of football, and I believe that the passion here would be extraordinary, so I think it would be a great event.”

The area would seem to be the ideal setting for the draft in 2019 as the league will celebrate its 100th season, and centennial anniversary the following year.

Dee Haslam said the group has scouted potential downtown locations for events, but the first step is being picked from a competitive field.

“We’re working hard,” she said. “We really did a really great job on the bid. We feel confident.”