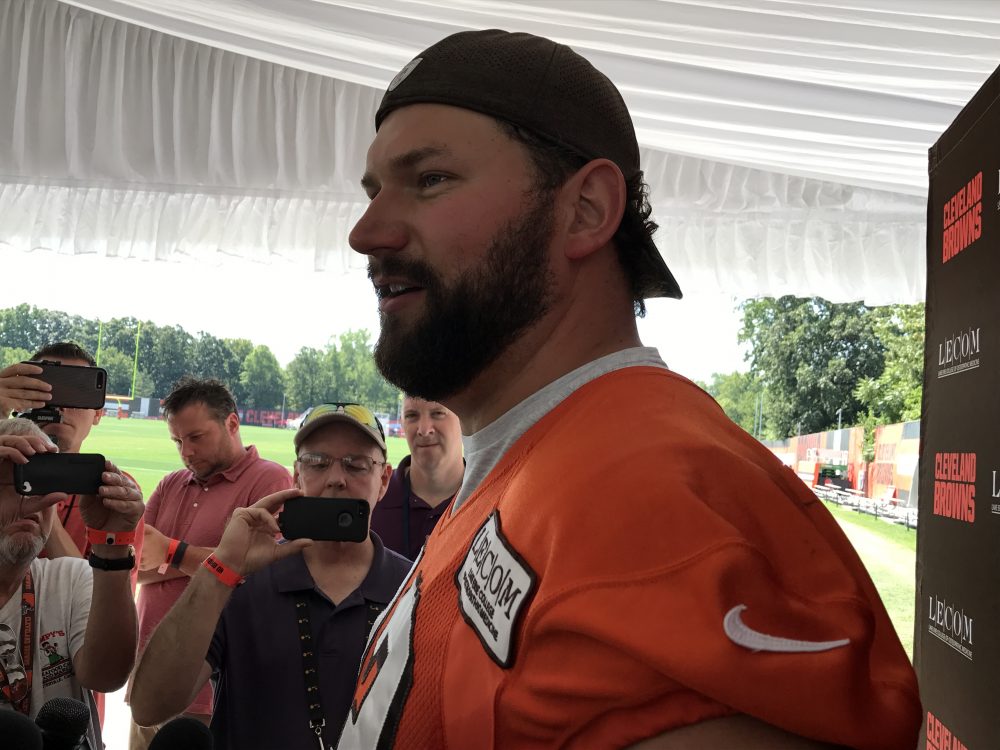 Joe Thomas is one of five players in NFL history to be selected to the Pro Bowl in each of their first 10 seasons. His streak of 9,934 snaps to open his career is believed to be the longest in NFL history, according to the Browns media relations department.
And he’s the first offensive lineman asked to be the subject of ESPN’s “E:60” documentary program. The episode will air Sunday at 9 a.m.
The milestones just keep coming.
“When ESPN came to me and asked me about doing something like that, I was maybe lukewarm at best at the beginning because not my favorite thing to do all the time is two or three days of on-camera stuff,” Thomas said Wednesday during training camp. “But I did feel a little bit humbled that I was the first offensive lineman, so I thought that was kind of special and felt that it was definitely deserving of my time when I got the full information on what was going to happen and basically what the show was all about.”
Thomas was interviewed by Jeremy Schaap and was put to the test. He successfully named the 18 starting quarterbacks he’s blocked for since 2007, but not without a struggle.
“There was like the middle ages in my life, like Year 5 to 7, that it was really hard to remember who was the quarterbacks back then,” he told reporters.

A combination of not-so-good quarterbacks and Joe Thomas has been around awhile. https://t.co/3T0heWvWAf

Thomas’ lack of a playoff appearance — 10-6 as a rookie was the lone winning season — and the team’s 48-112 record in his tenure were also addressed. Thomas reiterated he’s always been committed to helping turn the Browns into a winner and remains so.
He proudly discussed his love of Cleveland and how the city’s become home. He wore a Superman T-shirt and did his best rock star impersonation in front of the Rock and Roll Hall of Fame, shattering a guitar for the cameras.
“I’m kind of excited to see how it turned out because I think it will look pretty cool,” Thomas said. “It was actually a fake guitar because they knew I wasn’t strong enough to break a real one. That’s a true story. It was made up of plywood.”