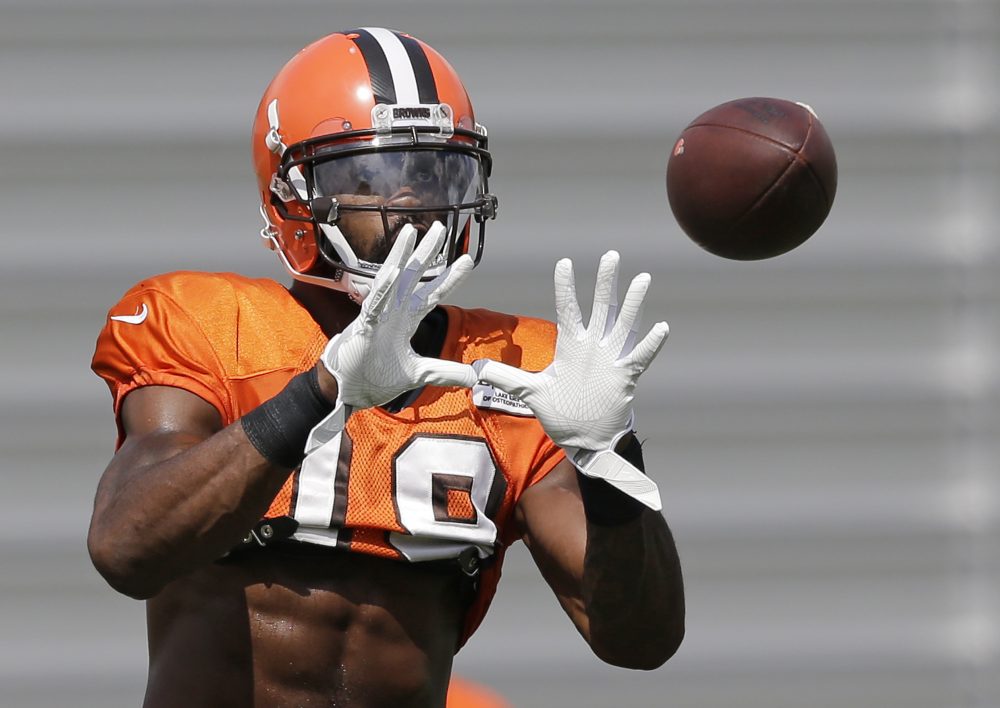 Kenny Britt has taken on the role of mentor to the young Browns receiving corps.

That’s not a joke. Or a misprint.

Britt’s checkered past followed him to Cleveland when he signed a four-year, $32.5 million deal in March because the internet isn’t going away. A quick visit to your favorite search engine reveals a litany of trouble during his first four years in the NFL with the Tennessee Titans.

But what was unfathomable only four years ago is reality inside the Cleveland locker room. Britt, 28, carries himself as a leader, and the four second-year receivers are following.

“I’d be wrong if I let one of these young guys fall in the same hole that I did,” he told The Chronicle-Telegram this week. “Even if they weren’t my teammate and just somebody that crossed my path in life, it’d be wrong for me not to share my knowledge.”

Britt’s unofficial motto is: Do as I say, not as I did.

He was arrested at least eight times, according to reports. He was charged with resisting arrest after police believed he was in possession of marijuana, was involved in a car chase with police, was arrested for outstanding traffic warrants, was allegedly involved in a bar fight, served a one-game suspension for DUI, dropped a stabbing victim at a hospital then refused to help police. He threatened to retire from the league on Facebook while also bashing Commissioner Roger Goodell, and had a sex tape posted on his Instagram account.

He uses his transgressions as cautionary tales.

“Whenever we’re conversating, he’ll just bring up certain situations that he’s been through and what not to do and where it’s gotten him,” said Ricardo Louis, a fourth-round pick in 2016. “How it affected him and how he overcame it.”

“Yeah, very upfront,” said Rashard Higgins, a fifth-round pick last year. “He’ll never hide nothing from us, he’ll let us know what happened, how it happened and what he learned from it and for us not to make that mistake in our life.”

As Britt, a first-round pick in 2009, settled down off the field, his performance on it improved. He set career highs last year with 68 catches for 1,002 yards and added five touchdowns. He’s missed just one game in the last three years, and the Browns were comfortable enough in his person and play to let Terrelle Pryor walk away in free agency.

He credits his four kids for helping him mature. The oldest is 7.

“It went from being all about me my first three years in the NFL,” he said. “I was always a family guy and I say I got a big head my first two years in the league of just worrying about self and just wanted to go out there and party and buy things that I really didn’t need.

“Then when I had my kids, everything changed. It’s everything for them and their future. I don’t want my kids to grow up with any want, having to ask for anything.”

Britt said the key to being a mentor is setting a good example.

“Do all the right things in every part of my life, on the field and off the field,” he said.

That obviously wasn’t always the case, but Britt said he doesn’t regret the misdeeds.

“Nah, not really,” he said. “I mean, it made me stronger in every part of my life. There’s things that you would not like to happen, but it made me a better person. Some things that I had to go through to make me grow.”

Louis and Higgins said Britt doesn’t shove his leadership down their throats. He said he observes when they’re having a bad day and makes himself available to listen.

“He’s very subtle with it,” Louis said. “It’s kinda like at certain times and points during the days that he’ll come to you and say certain things and then later on it’ll trip your head like what he was talking about. He has a very special way of how he leads.”

Young players constantly have coaches, family and friends in their ears. But words of wisdom from someone at the same position come across loud and clear.

“You can’t really teach experiences, but for him to experience certain things, you kind of have a hands-on lesson of what it takes to overcome a certain adversity and get better in whatever it is you want to do,” Louis said. “Especially the goal that we have as individuals playing the receiver position, you want to play a long time, you want to have great numbers, you want to end up getting a good contract, wherever you end up you want to be able to be the face of that team, or a leader on that team.

“And for Kenny to have been through a lot of different situations, being a young guy, you can take in a lot of stuff and just run with it and apply it to the rest of your career.”

He and Higgins are willing listeners.

“These guys are taking everything I say and they lock it in,” Britt said. “I tell them what my father told me. Take every advice. The bad advice you know not to listen to. Then the good advice you can keep for yourself and pass on.”

The life lessons also apply to the field. Earlier this week, he showed the young wideouts film of him catching the winning pass to cap a 99-yard drive with the Rams after dropping a touchdown on the previous possession.

“I guess that was his way of showing us how to be confident and also that even when you’re tired and you feel like there’s no hope, you still have to play the game, you still have to have faith and still believe that you can win the game no matter what circumstances,” Louis said.

Britt fit in with the Browns right away. There was never any doubt.

“I can honestly say I’ve never seen Kenny uncomfortable,” said cornerback Jason McCourty, who was teammates with Britt at Rutgers and with the Titans. “No matter where he’s at, he’s the loudest guy there, he’s laughing, he has a big smile on his face.”

QB Brock Osweiler looking for better performance, to justify starting role
Jamar Taylor remains driven by trade from Dolphins, believes he can be one of top corners in NFL