Jamar Taylor remains driven by trade from Dolphins, believes he can be one of top corners in NFL 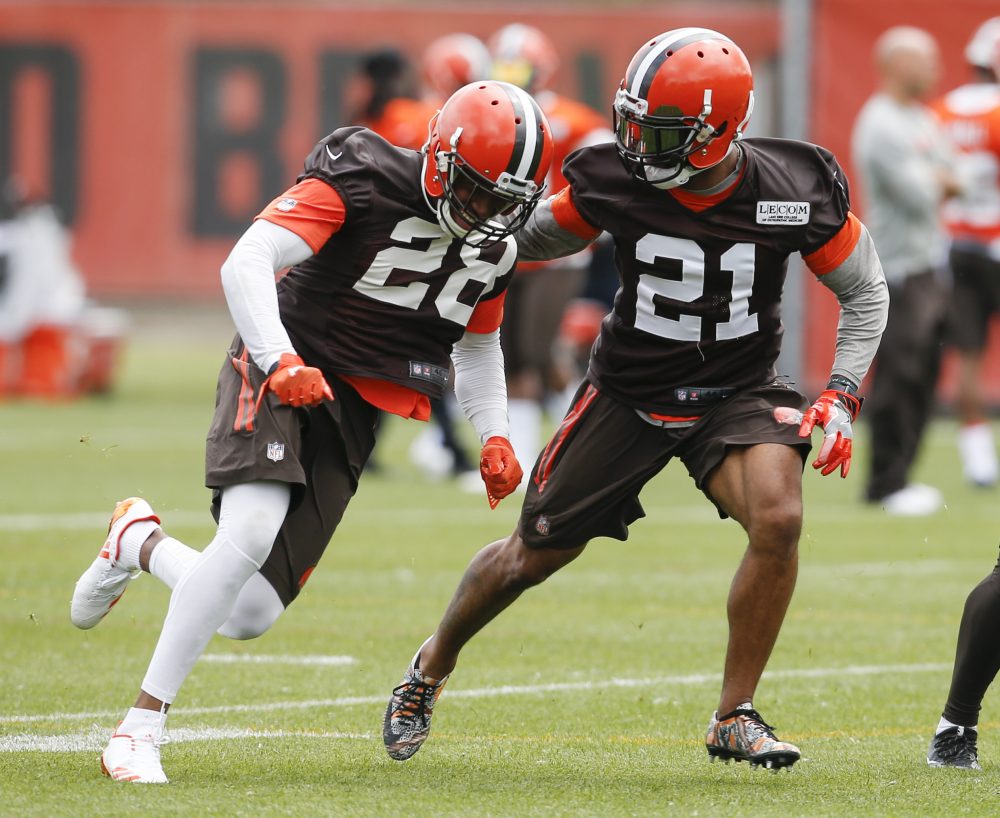 Jamar Taylor has had the look since he was a kid. The one given to doubters that conveys his contempt and says don’t underestimate me — ever again.

“I had a coach in Pop Warner who told me I wasn’t good,” Taylor said during training camp. “It was funny because he was my uncle’s friend. It seemed like every time my uncle wasn’t at practice, he would just get on me. But then I’d go in the game and I’d ball and I’d look at him like, ‘OK, yeah.’”

Taylor said he was 10 or 11 at the time, playing safety and receiver. He’s 26 now, has made a career at cornerback and he hasn’t stopped internalizing slights and converting them to motivation.

Taylor is coming off his best year, starting 14 games, getting the first three interceptions of his four-year career, breaking up a career-high 13 passes and signing a three-year, $16.5 million in his first season with the Browns. But instead of relaxing, he remains driven by the past.

“Every day I think about what happened with me and Miami and every day I feel like I have to prove to them that they made a mistake,” he said. “My other edge is I want to make Pro Bowls. I want to be named in the top five corners, top three corners, so I have a lot to prove and I want them to think about it every time I’m on the tape and I make a play that we should have never let this guy go.”

Taylor was a second-round pick of the Dolphins in 2013 out of Boise State. He dealt with injuries and inconsistency and started only nine games in three years before the Dolphins gave up on him and traded him to the Browns on the final day of the 2016 draft to move up 27 spots in the seventh round.

“Sometimes you just want to prove (people) wrong,” former Dolphins cornerback Cortland Finnegan told The Chronicle by phone Friday. “On hard days when he needs extra motivation, he can look no further than that.”

Others’ doubt has always stoked the fire inside Taylor.

“I don’t think nobody can tell me I can’t be who I want to be,” he said. “I feel like God has given me a vision of what I can be and he installed hard work in me, so it’s like, who’s going to stop me?”

The proclamation that he wants to be considered a top three corner in the league caught listeners off-guard. Taylor wouldn’t be on anyone’s top-10 list and might not crack the top 50, but he doesn’t care.

“You’ve got to love that,” said Finnegan, his mentor in Miami. “When you’re in the NFL and there are such a select few, why not say that?

“You’ve got to bring every intangible to it. He’s one of the hardest workers I know, he’s a student of the game, he takes care of his body. Why can’t he be? It’s crazy to think he can’t be. He’s completely obsessed with football. I doubt nothing he said.”

Taylor said not everyone in the league has the same lofty goals.

“You’d be surprised. Some guys just want to play football,” he said. “But I don’t do this just to play. I do this to be the best. It’s been the same way since I was 5 years old. My mom and my dad never just let me just be a guy. So I’ve got some work to do.”

When Taylor watches Pro Bowlers Richard Sherman, Patrick Peterson and Aqib Talib, he feels he belongs. He points to his second-round draft status, No. 54 overall, as proof he has the talent.

“Those guys are all awesome, they all bring something different to the position, but I take some stuff from their game and I add some stuff from my game,” Taylor said. “I want to be up there with those guys.”

“If he was a craftsman, he would have a lot of tools in his tool box,” Boddy-Calhoun said. “I am not a tool guy so I am not going to try to name all the tools he has, but I am just saying, the guy can play off (coverage), he can play inside and he can go back and play safety. He can play middle linebacker if you ask him to because he is just that versatile.

“When you talk about off the field, he is the guy that does all the right things. We already break at 10 o’clock with 11 o’clock curfew and he is still in here and you’re like, ‘You’re insane, let’s go home. We have been here since 6 o’clock.’ When you look at a guy like that, his ceiling is extremely high.”

Finnegan said Taylor had the work ethic when he arrived in Miami in 2014 for the ninth of his 10 NFL seasons. But Taylor wasn’t having the success he desired, and Finnegan took him under his wing.

“He was frustrated because the game was so fast,” Finnegan said. “You slow it down by watching film. Jamar was a willing pupil. He took heed and listened and it worked for him.”

The Miami years were frustrating for Taylor.

“There were a lot of praying nights, a lot of nights calling my wife now, my parents, kind of just letting out frustration,” he said. “But at the same time I always had that in the back of my mind that I could be a top guy, I just had to continue to work and kind of let everything play out.

“It’s all about the support system. They wouldn’t let me fall in deeper down into a bad place. Every time I started to they’d pick me back up. It’s because of them and God himself for just keeping me strong through all that stuff.”

Finnegan helped keep him focused on the future.

“(He) was always telling me, ‘Hey, you’ve got to keep working because you’re going to have one helluva testimony,’” Taylor said. “To have a vet tell me that, I was like, OK. I just stuck around him and he taught me the game and I really didn’t leave his side.”

Finnegan was impressed with Taylor’s competitive nature and indefatigable spirit. He said they’d watch film and four of five fundamentals would be perfect, but Taylor would want to go work on the fifth one.

“Nothing was good enough,” Finnegan said. “What I love about Jamar is he’s a true competitor. Whoever lined up in front of him, he didn’t have a name. It didn’t matter if it was Julio Jones or Jarvis Landry. He was worried about how could he better himself.”

The quest for greatness hasn’t stopped. Taylor will start opposite Joe Haden on the outside, then shift into the slot when the offense goes with three receivers. He predicts big things for Year 2 in Cleveland.

“Taking my game to a whole ’nother level,” Taylor said. “Last year was not good enough for me, so I have to take big strides this year.”