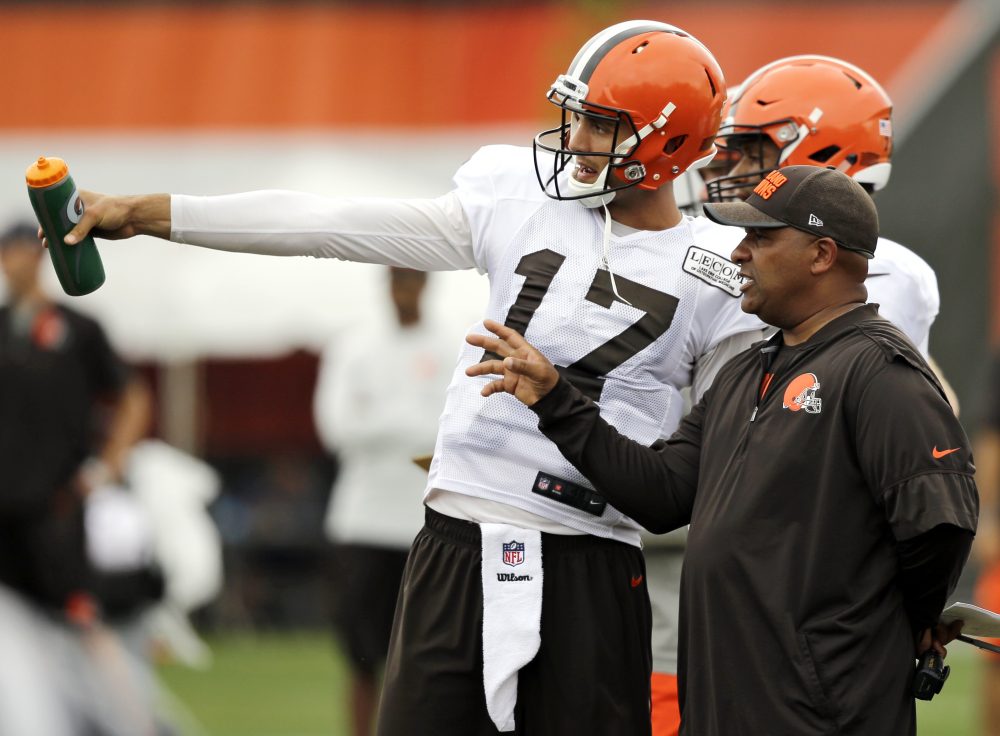 BEREA — Brock Osweiler smiled and said he still believed he could be named the starting quarterback for the regular season.

“Until we have an official Day One starter, I feel like I have a great opportunity here,” he said Wednesday morning, hours after being told rookie DeShone Kizer would start Saturday in the third preseason game at Tampa Bay. “As far as I know, it’s still wide open, but I’m given the same information you guys are.”

The competition is a lot closer to closed than open. Coach Hue Jackson said Kizer would have to flop vs. the Bucs not to be the starter Week 1 against the Pittsburgh Steelers on Sept. 10.

Osweiler was asked what has to happen for him to win the job.


“I think that’s a great question for a general manager,” he said.

“It’s my decision,” Jackson said. “I don’t know where that came from. Me and Brock’s conversation this morning had nothing with a general manager thought process in it.”

Osweiler’s future with the Browns is as uncertain as the day he arrived in March from the Houston Texans as an afterthought in a trade that brought a second-round draft pick in 2018. He was expected to be traded or cut shortly thereafter but stuck around.

The Browns remain willing to trade him, and he seemed open to the idea when asked if he’d ask to be dealt.

“That’s something I’m going to stay away from,” he said. “I’m always going to just focus on the things I can control, and right now that’s being a great teammate, that’s continuing to prepare, be a pro, stay in the playbook and just continue to strive to be a better player every single day.

“I love this organization, I love coming to work here every day.”

Jackson said he’d be glad to keep him.

Osweiler, 26, won’t play Saturday night because Jackson wants to give the reps to youngsters Kizer, Cody Kesser and Kevin Hogan. The only quarterback with an NFL win — Osweiler is 13-8 over the last two seasons with Denver and Houston — will remain on the sideline.

Osweiler’s track record, though spotty, is long enough for the Browns to know what he can do. But he would need Kizer to fall flat against the Bucs to be reconsidered as the starter.

Osweiler was promoted to No. 1 on the depth chart before the start of the preseason and failed to secure the job. He played six series in two games without scoring a point after spending nearly all his time in Cleveland working with the second-teamers. He’s 12-for-22 (54.5 percent) for 67 yards, an interception and a 41.3 rating.

“To be completely honest with you, I have absolutely no regret on anything,” he said. “I truly believe I’ve laid everything out there on the table. I’m very proud of what I was able to show my teammates and the coaching staff throughout OTAs going back to Day One when we were just given the playbook and how I mastered that.

“So there’s no regret on anything and I don’t think there’s anything else I need to do. They know the quarterback and the teammate that I am.”

Osweiler was extremely complimentary of Jackson and said all the quarterbacks were given a “fair shot” to win the job. He’s not happy with the latest decision but hasn’t stopped hoping.

“I’m certainly disappointed that I’m not starting the Tampa Bay game, but by no means does that mean that’s the end of the season or the end of that,” he said. “It’s one football game right now.”

After being benched last season then dumped by the Texans one year into a four-year, $72 million deal, Osweiler is desperate for a chance to prove he’s improved.

“I think every player in this league is chomping at the bit to go out there and prove themselves to their teammates, their peers, their family, their organization, their city and I’m no different,” he said. “I’m still a very young, young quarterback in this league. I’m 26 years old and I still think I have a lot to bring to the table and I’m very eager to show people that.”

Hue Jackson says he feels “pretty good” about QB decision coming Wednesday, has for “a little while”
Hue Jackson says DeShone Kizer would have to flop vs. Bucs not to start Week 1; Kizer plans to keep job for long time