Notes: A lighter Joe Schobert ready to move into starting role as MLB 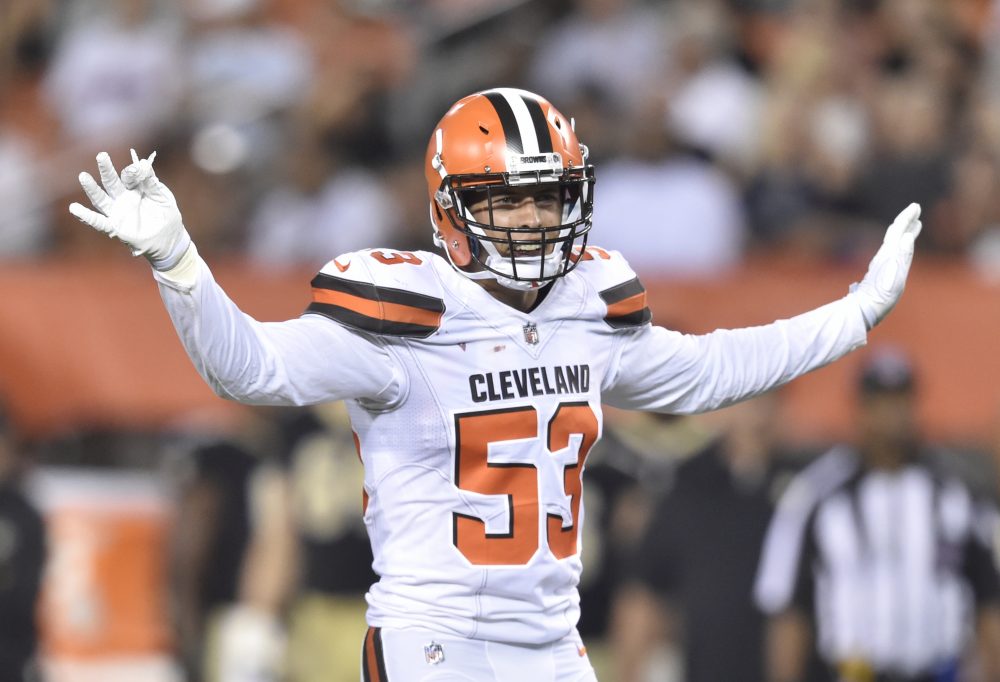 BEREA — Who says bigger is better?
Joe Schobert dropped at least 15 pounds from last season, has impressed coaches and is ready to step in as the starting middle linebacker after Tank Carder was lost for the season with a torn anterior cruciate ligament Monday night in a 10-6 win over the New York Giants.
“I feel a lot better moving around,” Schobert said Wednesday. “Fifteen pounds is a lot less stress on your joints, being able to open up and run better and cover some space.”
Schobert lost the weight to make the move from 3-4 outside linebacker to 4-3 middle linebacker. He’s 6-foot-1, was 235 or 240 pounds at Wisconsin and said he’s lighter than that now. He was listed at 6-1, 245 last season as a rookie.
“Just position change, getting off the ball, not being an outside linebacker and then fitting in the body that I feel more comfortable in, so I just worked out, got to my best shape possible and happened to be losing a little bit of weight and that’s what happened,” said Schobert, a fourth-round pick. “I just ate healthier than I did in college. Did a good job of making sure I knew what I was putting in my body all the time. That definitely helped.”
Schobert is off to a great start through two preseason games. He’s the team leader with eight tackles, seven solos, two sacks and two passes defensed.
“He came in here as an outside linebacker and played about 25 pounds overweight,” coach Hue Jackson said. “He’s gotten the weight off, he’s playing the Mike linebacker position, he’s extremely bright. That’s the quarterback of our defense, so he has a lot of input and say from snap to snap what our defense does, so he kind of controls that, and that’s a perfect fit for him.
“He obviously still has the ability to rush the quarterback from the edges, but he can play inside and he demonstrated that in these two preseason games and throughout training camp and he’s done an outstanding job.”
Carder suffered a torn anterior cruciate ligament Monday night, will have surgery and was placed on season-ending injured reserve Wednesday. He has appeared in 77 games since joining the Browns off waivers in 2012.

MIXED REACTION
Tight end Seth DeValve stayed off social media, and his wife took Google off his phone. But he had the right idea of the public reaction to him and 11 teammates taking a knee to pray during the national anthem Monday night.
“Very much mixed feedback,” he said. “There’s been lots of mixed opinions on this subject for hundreds of years, so it’s the same today.”
DeValve was the first white NFL player to not stand for the anthem. He felt the Browns’ protest was different than those by others across the league.
“We wanted to take the time to pray for our country,” he said. “It wasn’t something that was meant to be disrespectful to anything or anybody, it was something that was meant to take time out to pray for the status of our country.”
DeValve said the players haven’t discussed if they’ll continue with the demonstration meant to call attention to racial injustice. The 12 players kneeling in a prayer circle were joined by five teammates standing with a hand on their shoulders.
“We have a tight-knit group in this locker room,” DeValve said. “Guys support each other on and off the field. We care about each other and each other’s lives. I, myself, care about this subject, I care about the guys that wanted to take a stand about this subject and that’s my role first and foremost, to be an ally to them and play a supportive role.”

ROSTER MOVE
Defensive back Christian Bryant (5-9, 195) was signed. He played at Glenville and Ohio State.
Bryant was a seventh-round pick of the Rams in 2014 and has played in 12 games, nine with the Rams in 2015 and three with the Cardinals last season.