Jabrill Peppers finds home at free safety, showing he can handle life in the deep middle 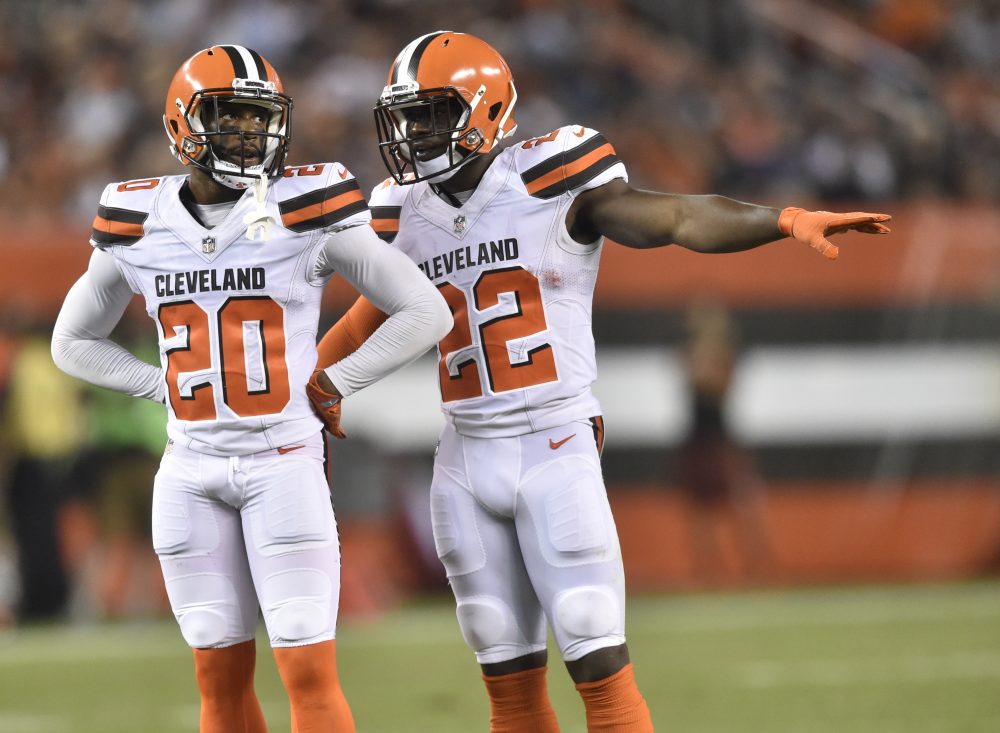 BEREA — Jabrill Peppers was focused on Giants quarterback Eli Manning. Peppers saw that Manning didn’t take his eyes off the right side of the field and receiver Brandon Marshall vs. cornerback Joe Haden in man coverage. Peppers correctly assumed the pass was headed in that direction and took off.

Marshall beat Haden at the line and Manning threw a perfect ball down the sideline, but it went through Marshall’s hands. Peppers arrived a moment later and delivered a shoulder-to-shoulder hit that spun Marshall. It originally drew a flag but was correctly waved off.

“I know he saw me coming, but I don’t think he short-armed it,” Peppers said Thursday of Marshall, whose eyes shifted toward Peppers at the last instant. “I definitely could’ve gotten it out, but had to slow up a little bit. Still wanted to let him know that I was there, but that’s all that comes with playing the free safety position.

“You’ve got to be there to help your guys over the top but then be physical at the line of scrimmage. You’ve got to let people know that you can go sideline to sideline.”

Peppers appears to have found a home at free safety, making four tackles and playing all 28 snaps against the Giants in the role, according to profootballfocus.com. The rookie No. 25 pick will be used all over coordinator Gregg Williams’ flexible defense, but his base will be in the deep middle of the field.

That’s a departure for Peppers, who played a lot of linebacker and close to the line of scrimmage in his final year at Michigan.

Just don’t suggest it’s too difficult for him.

“I laugh at all of the reports that said maybe he can’t play in the middle of the field,” coach Hue Jackson said. “Here is a guy who returns punts and he has to judge a ball all the time. That is what he does. This guy knows how to track a ball.

“He has the skill to play back there, and he has demonstrated that.”

Peppers heard the skepticism that the Browns would have difficulty finding a position for him bouncing around for the Wolverines. He said it added “fuel to the fire” but never doubted he could make the transition.

“Because I know what I can do,” Peppers said. “Things got blown out of proportion because according to you guys I didn’t have a position, but all I knew and what I told the coaches here, all I need is an opportunity. They gave me an opportunity. I’m forever indebted and I’ll try to be the best person and player I can be.

“I’m going to take the full opportunity to keep showing what I can do.”

Peppers took one for the team when he played multiple positions on the defense to help the Wolverines. He believed he belonged at free safety.

“In my head I always knew what I wanted to do, what my best position was going to be,” he said. “I’m just back to being one of the generals on the field, seeing everything, formations, making calls. Just trying to make it as easy on the other guys as possible.”

The ability of Peppers to transition to free safety calms the uncertainty in the secondary. Derrick Kindred, a fourth-round pick, has gone back to his more comfortable spot at strong safety after trying to fill in at free when Ed Reynolds was injured.

Playing free safety should allow Peppers to make more plays on the ball. It also takes advantage of his high football IQ. He credits Michigan coach Jim Harbaugh with preparing him for the mental challenges of the NFL, but he’s also using all the resources available to him.

Peppers, who had a 31-yard punt return against the Giants and a 36-yarder called back by penalty, has not only adapted to a new position. He’s adjusted to sharing a field with NFL stars like Manning, Marshall and Odell Beckham Jr.

He didn’t need long to get over the awe.

“Probably about five seconds into the first play,” Peppers said. “After that you just gotta come to a realization that you’re here now, you’ve got to treat it as such.

“Fear no one but respect all. That’s been my motto. Everyone puts their pants on the same way I do. So I’m just going to go out there and compete.”