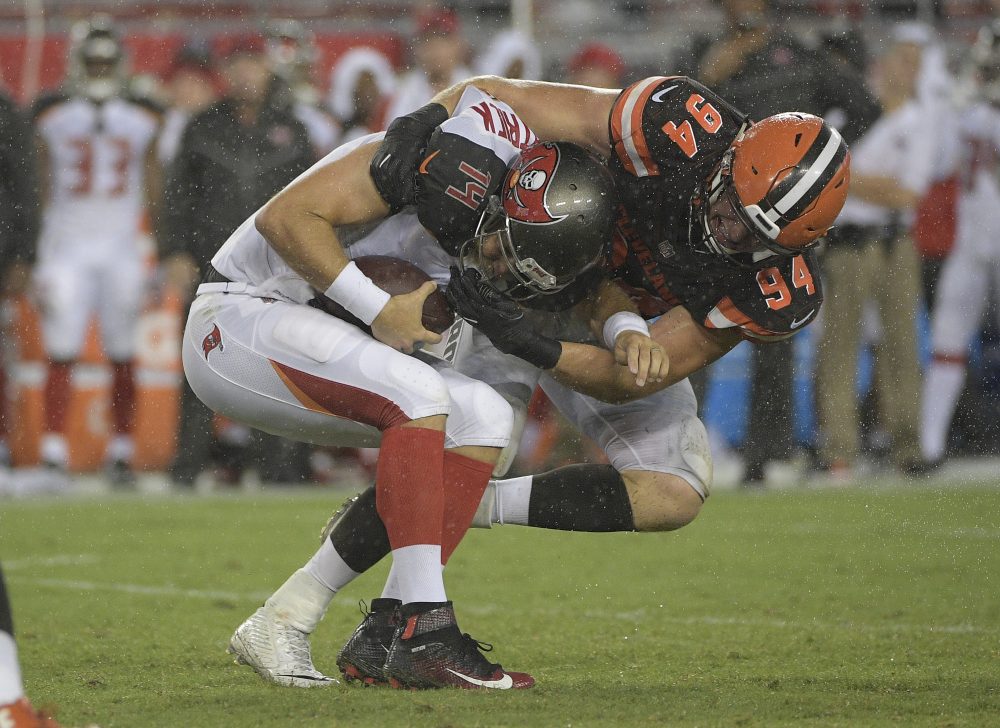 Safety Jabrill Peppers had an interception near the goal line. Defensive end Myles Garrett had a quarterback hit and spent plenty of time in the backfield. Linebacker Joe Schobert had six tackles and a pass defensed. Defensive end Carl Nassib had three tackles, a sack and a tackle for loss. Defensive end Emmanuel Ogbah had a sack and a batted pass.

Defensive players from the last two drafts showed up Saturday night in a 13-9 win over the Tampa Bay Buccaneers, bringing a smile to coach Hue Jackson’s face.

“The defense continues to take positive steps,” he said Sunday on a conference call. “Obviously, we have been really aggressive and fast and played with some really good discipline on that side of the ball. It is impressive that we haven’t allowed a touchdown the last two games and it is really good to see our drafted players making an impact.”

Under new coordinator Gregg Williams, the Browns allowed a fourth-quarter touchdown to the Saints in the preseason opener, then held the Giants to two field goals and the Buccaneers to three.


“Coach Williams has done a really nice job in the way he is utilizing personnel and allowing guys to use their strengths,” Jackson said.

He believes the defense can still reach another level, particularly against the run.

“Every now and then, still the ball will pop out of there,” Jackson said. “It is about everybody understanding their gaps and the communication but, boy, are we vastly improved in that area over watching all of the things we have all seen in the past.

“I give a lot of that credit to Gregg and to our players and the rest of the staff. They have done a great job of implementing a system, having true belief in it and making it work.”

The Browns are still waiting for one or two of their backup receivers to step to the forefront, so Jackson was asked if they needed to add a wideout.

“I am going to leave that up to Sashi (Brown) and his group,” Jackson said, referring to the head of football operations. “But what we have to do as coaches and guys who are here is we have to make those plays when those opportunities present themselves. That is how I can help and our coaching staff can help manage this.”

Rashard Higgins received most of the repetitions as the No. 3 wideout Saturday behind starters Corey Coleman and Kenny Britt but didn’t make a catch. Either did Ricardo Louis, his primary challenger, who did draw a pass interference penalty downfield.

“There is still another opportunity to have those things show up,” Jackson said. “These guys are trying extremely hard. They have done a great job of blocking downfield. Sometimes their number is called and we don’t get the ball to them. Sometimes their number is called and we are not in the right spot. What we have to do is continue to work at it, keep getting better and see if we can get there.”

Jackson cranked up the running game with running back Isaiah Crowell and left tackle Joe Thomas back in the lineup. Jackson has vowed to make establishing the run a priority this season.

“We did a nice job in some sequences running the football,” Jackson said. “We have committed to the run and we were effective with it at times.”

Kickers Cody Parkey and rookie Zane Gonzalez will have to sweat out the final week of practice and the preseason finale Thursday in Chicago to see who wins the job and a roster spot.

“I don’t know if anybody has taken the lead. That thing is really close,” Jackson said. “We feel good about both of the players, and it is going to come down to the wire. Both have done a tremendous job. We are going to look at that very closely this week as we go through this game on Thursday.”

Parkey made 38- and 47-yard field goals Saturday, and Gonzalez was wide left from 55 yards. Gonzalez made a 39-yarder vs. the Giants.

Fullback Danny Vitale injured his ankle Saturday and his availability for the season opener Sept. 10 is in doubt. He’s the only true fullback on the roster and was replaced by tight end J.P. Holtz.

** Jackson continues to lament penalties. The Browns committed 14 for 91 yards against Tampa Bay, with several coming on special teams, and have 35 for 233 yards in three games.

“We have to clean up this penalty issue throughout our football team,” Jackson said. “It is not just special teams, it is offensively and defensively.”