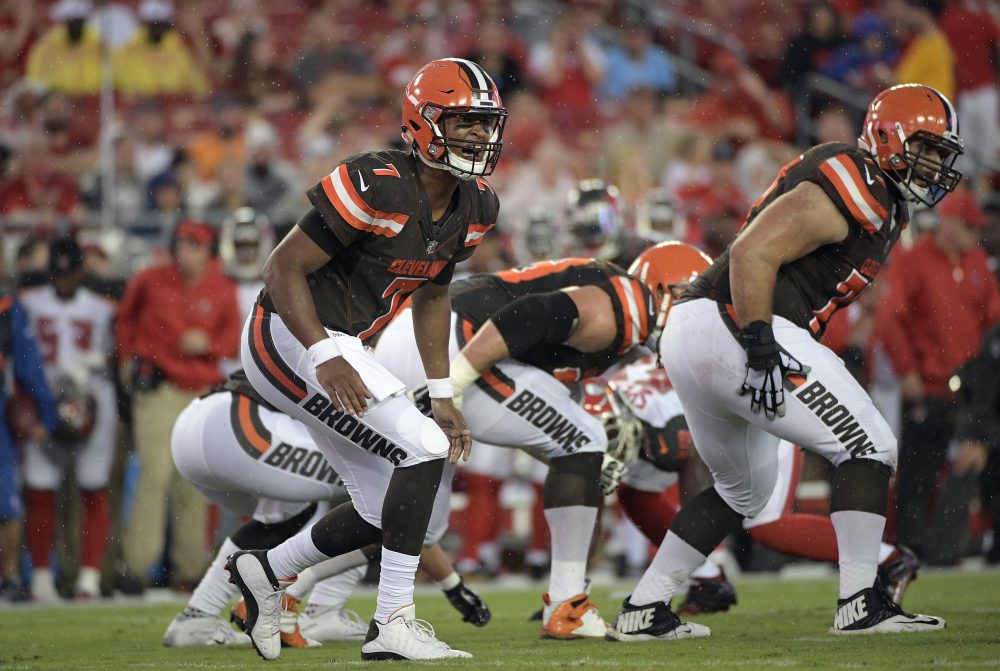 BEREA — DeShone Kizer didn’t grow up a Browns fan, but as a football player in Toledo, he knew plenty of rabid Cleveland fans and heard all about their pain. And, yes, he saw the infamous jersey listing all the quarterbacks to start since the franchise returned in 1999.

“You see that list grow and grow and grow, and hear the people and the chatter throughout my whole community,” Kizer said Monday, a day after coach Hue Jackson named him the starter for his rookie season. “So now to be put on that list and hopefully end that list will be an awesome, awesome situation for me.

“This program is obviously storied and it’s had a lot of success. To now go out and represent it being from this area is truly an honor.”

“Due to injury and due to some (lack of) success on the field they haven’t been able to find their guy,” Kizer said. “And that’s all I need to know to understand that I need to go out there and work hard every day to stop that tradition here.”

Kizer will begin his tenure Sept. 10 against the Pittsburgh Steelers at FirstEnergy Stadium. Facing a team with a rich playoff tradition and a future Hall of Fame quarterback in Ben Roethlisberger poses enough of a challenge. He isn’t letting the list of quarterback failures add to his list of concerns.

“It’s 2017 and I bet you (for) 10 of those 26 I wasn’t even considering playing in the NFL at the time (they played),” Kizer said. “So that is way behind us. And obviously the vibes out here at practice are completely different than what they’ve been in the past, we have a new coaching staff, we’ve been through new owners in that time. And that in itself should show you that there’s some things changing here.”

From the moment Kizer was drafted No. 52 overall out of Notre Dame, he aspired to be the starter and the beginning of a new Browns era.

“That’s always been the goal,” he said. “Obviously, winning is something we want to do here and we haven’t been able to do for quite a few years now. So to be a start of hopefully that tradition that we want to have here would be an honor.”

Kizer sees the big picture and has grandiose goals for the long term. But he isn’t setting any for this season, despite the success last year of rookies Carson Wentz and Dak Prescott.

“My expectations are to have no expectations,” Kizer said. “If you set goals wherever you want to set them and you fall short of them, that’s a mental thing that you don’t want to deal with.

“So right now, it’s just all about going out and competing each rep and trying to have success and winning on each rep.”

Kizer won the job over Kessler and veteran Brock Osweiler because he handled each new challenge thrown at him by Jackson. He slowly climbed the depth chart, was given more responsibility and responded well.

“The goal of this whole process was to be gradual, to take rookie camp and lead that into OTAs, into veteran camp and then obviously into training camp, and I’ve been right on path,” Kizer said. “Obviously, I stand here in front of you guys as the starting quarterback today. So apparently that was the right way to go about things.”

Notre Dame coach Brian Kelly made headlines before the draft when he said Kizer, who left with two years of eligibility remaining, wasn’t ready for the NFL on and off the field. Questions remain whether Kizer is ready for life as an NFL starter.

“Until I’m out there, everyone’s going to have a right to an opinion and if that’s their opinion, then we’ll see Week 1,” said Kizer, who said he hadn’t talked to Kelly since winning the job but expects to soon. “I can truly say in this last four months that I feel very confident in the fact that I have become a lot better, and my development is headed in the right direction.”

Kizer secured the job Saturday night against Tampa Bay despite a poor statistical night, 6-for-18 for 93 yards, an interception and a 28.2 rating. Jackson liked how he dealt with his first start, and receiver Corey Coleman has been impressed with the 21-year-old’s maturity.

“He’s real poised for him to be so young, tremendous leadership, the way he carries himself as a true professional and a quarterback,” Coleman said. “That’s my guy, I’m happy for him.

“Coach Hue made his decision based off who will give us the best chance to win and I’m excited for him, I’m just ready to see how far he keeps on going and how great he keeps on doing and just taking it all in.”

“I truly felt as if I was in control of the offense and truly had the confidence needed to go out there and lead this team into position to win games,” Kizer said.

Left tackle Joe Thomas was reluctant to see a rookie win the competition because the learning curve is so steep. But he believes Jackson gives Kizer the best chance to succeed.

“When you have a coach who truly believes in you and obviously has put a lot of time and effort into my development, to have him by my side is an awesome experience,” Kizer said. “Obviously, we know that in this sport, the quarterback-head coach relationship can go a long ways and you see a lot of the successful teams have great quarterback-head coach relationships. Hopefully this can be something that lasts for 10, 15 years.”

He received congratulatory texts after the decision Sunday and talked to family.

“I didn’t talk to my mom as much as she would like,” he said. “Obviously, there’s a lot of people out there supporting me through all of this. This has been an awesome ride and obviously being back home in northern Ohio, this couldn’t go any better right now.”