Notes: WR Jordan Leslie fighting for roster spot while worrying about situation in hometown of Houston 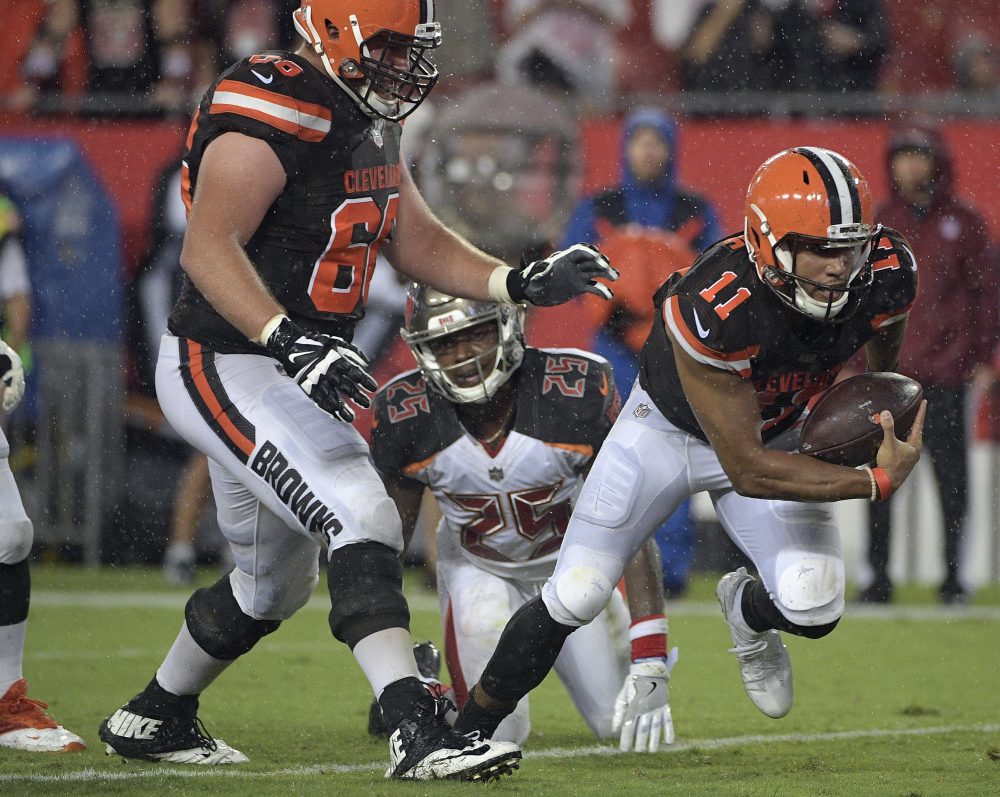 BEREA — Receiver Jordan Leslie’s attention is divided this week.
He’s fighting for one of the final roster spots that will be determined following Thursday night’s preseason finale in Chicago. When he’s not practicing, in meetings or studying the playbook, he’s glued to news coverage of Hurricane Harvey.
He’s a Houston native and still lives there.
“It’s crazy seeing the videos and all the flooding,” Leslie told The Chronicle. “It’s insane. But luckily I talked to my family that’s down there and they’re doing OK. Actually my dog’s with them. I’m sure my dog’s driving them crazy.”
Leslie said his mom recently moved to Utah but his grandparents remain in Houston. He’s checked in with them and his friends.
“I actually had a friend call me the other day and his car got completely flooded,” he said. “It’s unbelievable. I just know we need a lot of help down there.”
Leslie (6-foot-1, 205 pounds) appears to be battling Rannell Hall for the fifth receiver spot behind starters Corey Coleman and Kenny Britt and backups Rashard Higgins and Ricardo Louis. The Browns could keep six wideouts on the 53-man roster, but they could also swap out the bottom of the position group through waiver claims after final cuts.
Leslie knows his future with the Browns hangs in the balance.
“You just try to push it out of your mind and just focus on the upcoming game and what you can do to contribute to the team,” he said. “It’s your livelihood so, of course, it creeps up. But the best thing is just to focus on what you can do to help the team.”
Leslie was undrafted out of BYU in 2015. He’s spent time on practice squads with the Jaguars, Falcons, Titans and Browns but hasn’t appeared in a game.
He’s shown reliable hands throughout training camp and the preseason and has six catches for 76 yards and a touchdown in the preseason. He caught the 5-yard winner from Kevin Hogan on Saturday against Tampa Bay.
“That’s definitely one thing that I feel like every receiver should be able to do is catch the ball,” Leslie said. “I feel like that’s the one thing you have to focus on the most, and I feel like that’s my biggest strength.”
Leslie is intent on making a strong closing argument against the Bears.
“Anybody on the bubble, every game you have to show up,” he said. “You have to make every game, every rep the last rep you could play. Because it could be.”

HELPING HAND
Defensive end Emmanuel Ogbah’s family settled in Houston after emigrating from Nigeria when he was a kid. He said his family’s fine, but the videos on the news are tough to watch.
“It hurts because I grew up in that part I’m seeing on the news and places I’d drive past every day are underwater, it’s definitely crazy,” he said. “I’m praying for those people down there and the families, those victims.”
Ogbah said he’s been inspired by Houston Texans defensive lineman J.J. Watt, who had raised $2 million by Tuesday afternoon to help the relief efforts.
“J.J. Watt is doing a tremendous job,” Ogbah said. “He’s really inspiring younger guys like me, younger athletes to do something about it.
“We’re going to come together as a team, talk about it, see whatever we can do to help.”
Ogbah had a nervous moment when he couldn’t get in touch with his dad.
“So my dad always answers his phone and I called him and I didn’t get an answer, so I kind of panicked a little,” he said. “Then he called me back and said everybody was OK.”

ROSTER MOVES
Defensive end Cam Johnson returned to practice Monday from a knee injury that had sidelined him for weeks. He was released Tuesday as the Browns terminated his contract.
Free safety Ed Reynolds, who opened camp with the starting defense, was waived with an injury designation. He suffered a knee injury July 29 in the first tackling drill of training camp.
Johnson played in 12 games with nine starts in 2016. He had 29 tackles, three sacks and two forced fumbles.
Reynolds appeared in 10 games last year with seven starts. He had 40 tackles and a sack.

HANGING IN
Linebacker Christian Kirksey was teammates with Clearview High School graduate Anthony Hitchens at Iowa and they remain close. Hitchens, a linebacker for the Dallas Cowboys, suffered a tibial fracture in his right knee over the weekend and is expected to miss eight weeks.
“I talked to him. He’s doing good,” Kirksey said. “He’s in good spirits.”

EXTRA POINTS
Coach Hue Jackson said he hadn’t decided if rookie quarterback DeShone Kizer will play Thursday night. He also said he didn’t know what the quarterback rotation would be.
** Defensive tackle Danny Shelton (knee) ran from the walkthrough to the stationary bike to work with trainers, an encouraging sign that he’ll be ready for Week 1. He didn’t practice.