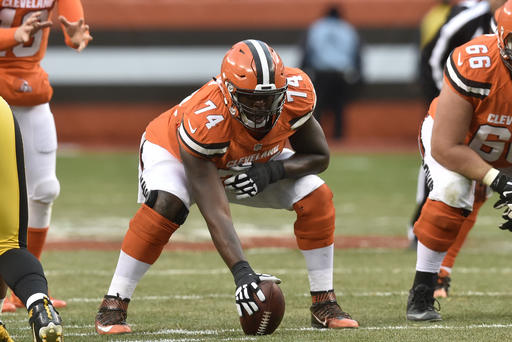 The Browns cut their losses with offensive lineman Cameron Erving. And managed to get something in return.
The Browns traded Erving, the No. 19 pick in 2015, to the Kansas City Chiefs on Wednesday for a conditional fifth-round pick in 2018. The Browns have 13 picks next year, including five in the first two rounds.

Erving is the latest in a long line of disastrous first-round selections, following Trent Richardson, Brandon Weeden, Barkevious Mingo, Johnny Manziel and Justin Gilbert. Erving appeared in 29 games with 17 starts and is gone before his third season.

He played mostly left tackle and a little bit of center at Florida State and was drafted by former general manager Ray Farmer as a contingency in case center Alex Mack left in free agency. Erving played guard as a rookie and was overmatched.

He moved to center last year after Mack signed with Atlanta and flopped again. Too many times he was driven into the backfield or missed an assignment.
He was switched to tackle for this season, which he considered his natural position. He worked at both tackle spots during training camp but continued to struggle before injuring a calf muscle.

“Early development wasn’t in place for Cam,” former Browns receiver Andrew Hawkins tweeted. “Coaching helped make strides in (development) last year, but a change of scenery will be good for him!”

The Browns likely would’ve cut Erving if they hadn’t found a trade partner, but they are left to figure out whom they will use as the swing tackle off the bench. Rookie Rod Johnson, a fifth-round pick, is a leading contender.