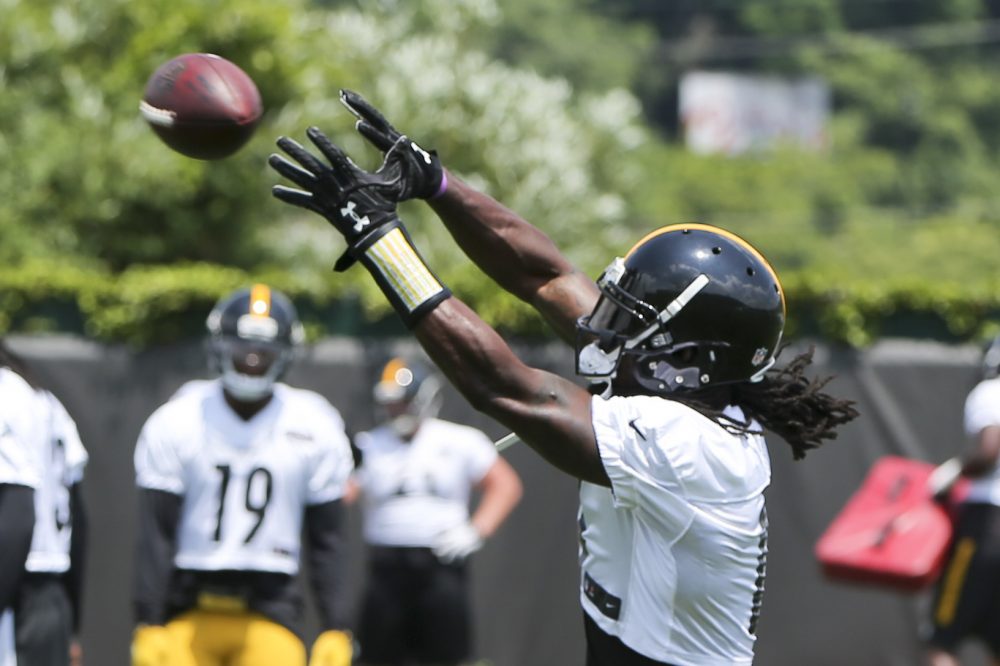 But in two years with the Pittsburgh Steelers, he caught only 22 passes (in 51 targets) for 446 yards and two touchdowns. The production didn’t match the tools through 21 games, including five starts.

The Steelers traded him to the Browns on Saturday, along with a seventh-round pick, for a sixth-round pick. The Browns were in desperate need of an upgrade at receiver and happy to provide a second chance for Coates.

“You know any opportunity you get it’s just a good time to start over,” he said Monday at Browns headquarters. “You go somewhere new you got new faces, so it’s always an opportunity and you gotta take advantage of it.”

“Just being consistent. Just being a guy that you can count on all the time,” he said. “Don’t be an up-and-down guy and that came with injuries.”

Last season was the perfect example of the elevator ride.

Coates sprinted out of the blocks with 19 catches for 421 yards and two touchdowns through five games. He led the league with six catches of at least 40 yards and a 22.2-yard average per catch.

But he caught only two passes for 14 yards in the final 11 games of the regular season as he dealt with broken index and ring fingers on his left hand and a groin injury that required offseason surgery.

“It’s part of the game,” he said. “You know you’re going to have ups and downs. It’s how you react toward it and how you recover from it and I did a good job recovering from it.”

Coates said he’s “a thousand times” mentally stronger after the early struggles in his career.

“After awhile, you go through a certain amount of stuff in your life,” he said. “I learned from my injuries, they helped me build and become a better player.”

He played through pain and tried to catch Ben Roethlisberger’s darts with a mangled hand.

“You know, it’s just a mind thing,” he said. “You gotta concentrate a little more. You gotta catch it a certain way and that was the biggest difference, finding a way to catch the ball without hitting your fingers again.”

Even before the broken fingers Coates struggled with drops, and needs to prove he can be a reliable route runner and target. But he has a quality teams crave and the Browns lacked.

“What am I getting? A guy that can run fast,” coach Hue Jackson said. “You guys know I like guys who can run and run fast and make plays down the field. He is a special teams player, as well.

“Here is another big, fast guy that we get a chance to see if he can make the plays I think he can.”

The coaching staff is trying to get the speedster up to speed and plans on Coates being on the field Sunday for the opener against the Steelers at FirstEnergy Stadium. Rookie quarterback DeShone Kizer has shown the ability to throw deep, which should take advantage of Coates’ skill set.

“You just gotta get in the playbook and learn what they do and whatever opportunity you get, you gotta go out there and play,” he said.

Coates could be matched up against cornerback Joe Haden, who was cut by the Browns last week after seven years and quickly signed with the Steelers.

“You look forward to going against him,” said Coates, who’s reunited with former Auburn teammates receiver Ricardo Louis and right tackle Shon Coleman. “He’s a great player, always has been. You just gotta go out there and showcase your best talent against a great player.”

Pittsburgh has won 30 of the last 34 games against the Browns, but Coates said the Steelers still treat the matchup with respect.

The quick meeting against his former team provides even more incentive in his Cleveland debut.

“If somebody trades you, you want to showcase your talent against them, show them what they’re missing,” Coates said.