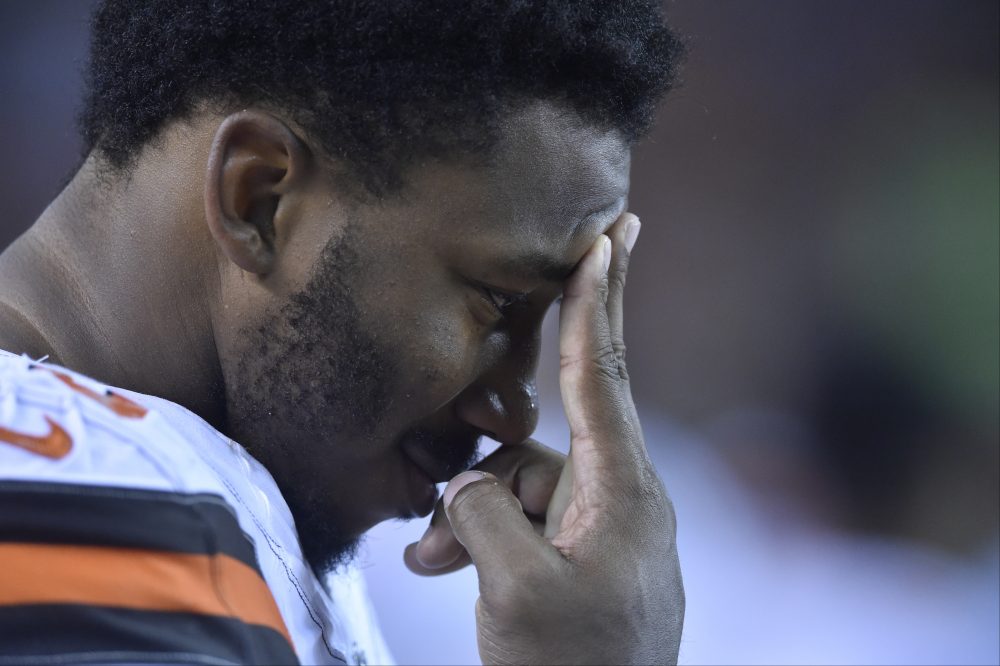 BEREA — The disappointment stretched through Browns headquarters and across Northeast Ohio.

No. 1 pick Myles Garrett was diagnosed with a high right ankle sprain and will miss at least the first two games and likely more. High ankle sprains usually require between four and six weeks recovery time.

“We’ve been watching it since training camp, we know what Myles can do,” left defensive end Emmanuel Ogbah said Thursday. “We just wanted the world to see what he can really do.”

Left tackle Joe Thomas had breakfast with Garrett. The veteran wanted to make sure the rookie was doing OK after being so excited to begin his career Sunday in the opener against the Pittsburgh Steelers.

“It’s just important when you’re a guy that wants to be out there so bad that you don’t get discouraged,” Thomas said. “While I’m sure he’s disappointed, I think he’s focused on getting back as soon as he can.”

Garrett had a high left ankle sprain last season at Texas A&M, missed a couple of games, returned to play through it and was slowed considerably. He finished with 8.5 sacks in 10 games. He had a left midfoot sprain during minicamp in June, but coach Hue Jackson said he isn’t worried about a pattern developing.

“No concern because I know exactly how it happened,” he said. “If you get somebody thrown into your leg, it could happen to any one of our guys. It is just unfortunate it happened to a guy who we wish was out there all of the time.”

“Just somebody was getting blocked, got pushed, stumbled and ended up going into the guy’s leg,” he said. “It is not something that was malicious or anything like that.”

Garrett, a defensive end, aimed to sack Ben Roethlisberger to start the season, then go on to win Defensive Rookie of the Year.

“I know it sucks for him, especially with the goals he set for himself, but definitely getting healthier takes precedent,” rookie safety Jabrill Peppers said.

Nate Orchard is listed behind Garrett at right end on the depth chart and returned to practice Wednesday after missing weeks with a groin injury. Carl Nassib could move from the left side and get the start against the Steelers. Tyrone Holmes was re-signed Thursday morning after being waived Sunday.

Outside linebacker Jamie Collins could see time at end in pass-rush situations.

“Myles is an awesome player and I was really looking forward to seeing him play in the regular season and contribute to this team,” Nassib said. “He’ll be back as soon as he can. Until then, I’m going to do everything I can to help this team win and do my best.”

The loss of Garrett, who attended meetings Thursday, will have a significant impact on the defense. He was drafted No. 1 overall to energize a pass rush that tied for 30th last season with 26 sacks, and transform a defense that was 31st.

“We’re definitely going to miss his speed, athleticism, forcing errant throws,” Peppers said. “But we have a lot of good guys, other guys to do that as well for us. No replacing Myles, but we’re going to do a pretty good job of it.”

He was first top pick by Cleveland since 2000, when Penn State defensive end Courtney Brown was the choice.

“He is everything I thought he was,” Jackson said of Garrett. “He is a tremendous football player. We just have to get beyond this, get him back out there and let him do what he came here to do.”

Thomas said it will be important not to rush back Garrett.

“Naturally, everybody wants to come back as quickly as they can, so a lot of times you see guys come back sooner than they are ready to come back, especially at skill positions and positions where you have to be up on top of your toes and you have to run,” Thomas said. “It is a very difficult injury and even though you can feel good enough to try to get out there and you can tape it up and brace it up as much as you can, you are just not the same player you were before the injury because it is tough. It really limits your ability to just run.”

This is the second straight year the Browns’ top pick was hurt in practice. Receiver Corey Coleman, the No. 15 pick in 2016, broke his hand before Week 3 and missed six games.

“We don’t have that in this building,” he said. “We are moving on. We get to lay claim on what our season is going to be starting this week.

“We have a big game against a good opponent, and we expect to go out and play well in front of our family, friends and our fans. That is what this is all about.”

Calvin Pryor cut following fight with teammate Ricardo Louis; coach Hue Jackson says he won’t run from adversity
DeShone Kizer has brain power and star power. Can he be the one?