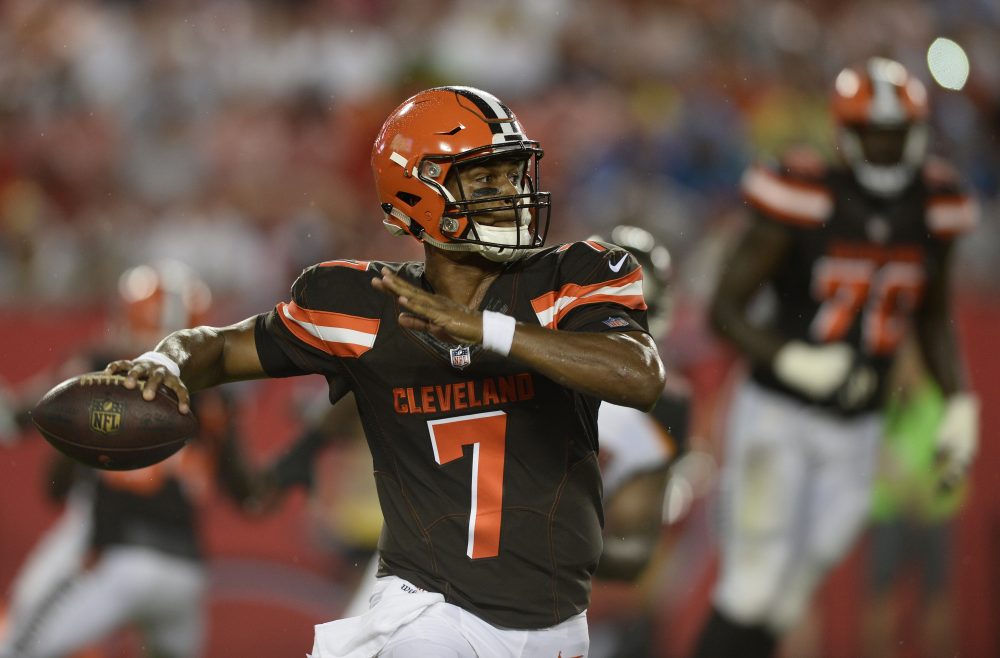 The Browns blew their chance at Ben Roethlisberger when Butch Davis drafted tight end Kellen Winslow with the No. 6 pick in 2004 and let the Ohio native slide to the hated Steelers at No. 11.

The Browns haven’t recovered from the monumental misstep — they’ve had a revolving door at quarterback and Roethlisberger is 20-2 against them — but hope they finally have their version of Roethlisberger in DeShone Kizer.

While it’s certainly premature to compare a rookie making his NFL debut to a future Hall of Famer who’s won two Super Bowls, the similarities are striking.

They have strong arms. They are difficult to bring down.

Browns vs. Steelers has always been the turnpike rivalry. Two Rust Belt cities separated by 130 miles and connected by I-80 and I-76.

With the new quarterback matchup, it could be shifted west to I-75.

“Pretty exciting for those folks near Toledo,” left tackle Joe Thomas said with a chuckle. “I don’t think Ben was ever quite as fast as DeShone is, so certainly I think DeShone’s feet can be a little bit more of a weapon, but when you’re talking about size and arm strength, I would say they’re comparable.”

Kizer, 21, grew up emulating the guy down the highway who’s 14 years his elder. They will square off for the first time Sunday at 1 p.m. at FirstEnergy Stadium.

“He is only about 40 minutes away from me. His reputation in my city is something that is well-respected,” Kizer said. “There are quite a few Pittsburgh fans in the Toledo area who live and die by his games and his play.

“His grit and what he does out on the field is exactly what you have to have to be successful in the AFC North. That is why he has been consistently successful. Hopefully, I will be able to pull from that and go out there, compete against him and do my best to try to take over that reputation that he has had in my city.”

Kizer will try to do what only Jeff Garcia has done before him since 1999 — win a season opener. The Browns are 1-17 in Week 1 since returning to the league, with the lone bright spot in 2003 against Baltimore.

An opening win against the Steelers would be just as sweet, and kick off the Kizer Era in grand fashion. Kizer will be dealing with a lot of emotions and experiencing a lot of firsts when he jogs into the huddle for the opening possession, but near the top of the list is sharing the field — and going head to head — with Roethlisberger.

“It is surreal,” Kizer said. “He was in the NFL when I was in sixth or seventh grade. I’m sure I drafted him in fantasy leagues when I wasn’t even near playing at this level.

“It is definitely different, but it comes with your new job. I’m looking forward to going out there and trying to compete at another level that he competes at.”

Roethlisberger has become the prototypical AFC North quarterback. He’s big enough to take the pounding of the rugged division, and his right arm is powerful enough to handle the wind, rain, sleet and snow.

Defensive coordinator Gregg Williams has faced Roethlisberger several times, but never with the Browns and never in the rivalry.

“He is different than almost everybody else in the league because of his power in the pocket,” Williams said. “A lot of quarterbacks go down just because they know they are getting ready to go down. A lot of guys will go ahead and take the dive just to get away from the contact. He almost relishes the contact.

Kizer showed some of the same ability in the preseason, getting outside the pocket before throwing a 52-yard pass to Richard Mullaney to set up a touchdown as he led a winning fourth-quarter rally in the opener vs. the Saints. He also is a threat if he tucks the ball and runs, although he must learn to avoid big hits while trying to pick up an extra yard or 2.

The early keys to success for Kizer will be recognizing the complicated Steelers blitzes, not holding the ball too long and avoiding the big mistake.

“But maybe he will make a big play, too,” coach Hue Jackson said. “The goal is for him to make more plays on the positive than the negative. That is what we have to do to win this game.”

Kizer’s work ethic and intelligence quickly impressed teammates and led to the belief he was the right man for the starting job.

“I think he is going to do some great things,” running back Isaiah Crowell said. “I expect a lot out of him this year.”

Kizer is 46,814 yards and 301 touchdowns behind Roethlisberger, and doesn’t have the playmakers around him that Roethlisberger does. But the Browns had Roethlisberger in mind when they picked Kizer at No. 52 out of Notre Dame and are filled with optimism.

“He has handled my barrage towards him. He understands what he needs to do,” Jackson said. “It is going to be electric for him. He is going to have to take it all in but play within our system, play within himself and go have a good game.”

DeShone Kizer has brain power and star power. Can he be the one?
DeShone Kizer draws praise from coach and teammates for play, toughness, composure in NFL debut