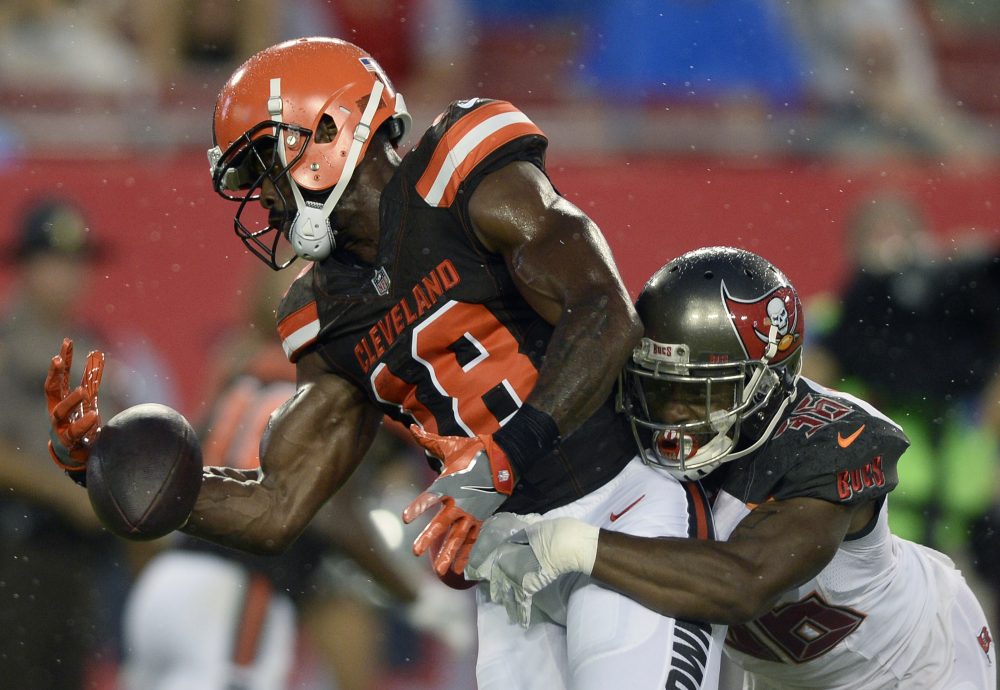 BEREA — Receiver Kenny Britt’s days as a starter could be numbered.

He signed a four-year, $32.5 million contract in the offseason to join the Browns as a free agent, but after a bad preseason and one regular-season loss, coach Hue Jackson is considering yanking him from the starting lineup.

“You’re saying he’s starting this week. We don’t know that,” Jackson said Monday. “So let’s see where we are this week and go from there.”

Britt caught one pass Sunday for 13 yards in the opening 21-18 loss to the Steelers. He had a fourth-quarter drop on a perfect pass that would’ve picked up a first down on second-and-19 from the Cleveland 22-yard line. He also had a miscommunication with quarterback DeShone Kizer on another incompletion.

“Some of the great ones have dropped balls, but you can’t do that to a young quarterback because he needs guys to make as many plays for him as they can in that situation,” Jackson said. “I think Kenny gets that. He knows that’s inexcusable. He has to make that play.”

The doubts started in the preseason. Britt, 28, failed to keep his feet inbounds in the end zone for what would’ve been a touchdown, dropped a pass in the red zone and couldn’t win against one-on-one coverage inside the 5.

Jackson doesn’t have any great options to join Corey Coleman in the starting lineup if he’s fed up with Britt. Coleman played 53 of 66 snaps Sunday and Britt 52.

Running back Duke Johnson played 50 snaps, almost entirely at receiver, but Jackson said he’s still a running back and the heavy use at wideout was game plan-specific. Ricardo Louis was next with 16 snaps and had two catches for 32 yards and a drop.

Sammie Coates and Kasen Williams, acquired right before the regular season, are other options. Williams played 12 snaps without a catch, and Coates didn’t play on offense.

“Correction: He did not take me down,” Ogbah responded to a reporter. “I went down because the ref was right there and I thought I was going to get a flag, but I didn’t get no flag. So I was surprised.”

When safety Derrick Kindred intercepted Roethlisberger in the fourth quarter, Ogbah got in front of Roethlisberger and blocked him with a shove. Roethlisberger flopped to the ground, then dived at Ogbah’s left ankle, wrapped up and tried to yank him down.

“I don’t know where that came from,” Ogbah said. “I just looked down and I see him trying to grab my ankle. I wondered what he was doing. All of a sudden he started like nudging it and the ref was sitting right there and he didn’t throw the flag.”

Ogbah said he would’ve been penalized and fined if he had done the same to Roethlisberger. He heard from his buddies in Houston.

Trailing 21-18 with less three minutes left and the Steelers on offense, the Browns’ two timeouts were precious. Yet Jackson spent both after one play — the 38-yard Antonio Brown catch among three defenders.

He said he told the official before the play that he wanted to call timeout after it. So, according to Jackson, the official gave him a timeout when Brown made the catch.

“All of a sudden the timeout’s already happened, and so he called it and so I’m like, ‘oh, gosh,’” Jackson said.

He knew if he challenged the catch then and lost he would be out of timeouts but felt it was worth the risk. The Steelers would’ve faced third-and-12 from their 18.

“I felt we had a really good chance to win the challenge, I thought the ball came out, I still think the tip of the ball came out and hit the ground,” Jackson said. “I didn’t think he had control all the way to the ground, obviously the officials did, and I lost that one.”

After a 15-yard Le’Veon Bell run, the Steelers were able to kneel and run out the clock.

** Jackson said he never considered kicking a field goal on fourth-and-2 from the 3 with 3:40 left and trailing by 11. A field goal would’ve made it a one-possession game, but the Browns scored a touchdown.

“We needed points. It wasn’t about getting within eight,” he said.

“We’ll work through that. I think everything is going to be OK,” Jackson said.

** Rookie running back Matthew Dayes was the personal protector for punter Britton Colquitt and blamed a miscommunication with long snapper Charley Hughlett for the blocked punt touchdown for the Steelers.

“We looked over it, and we will fix it,” Dayes said. “We know what to do from here on.”

Jackson said he won’t make a personnel change to the punt unit.

** Roethlisberger improved to 11-2 in Cleveland, surpassing Derek Anderson’s 10 wins for the Browns as the most by a quarterback at FirstEnergy Stadium since 1999.