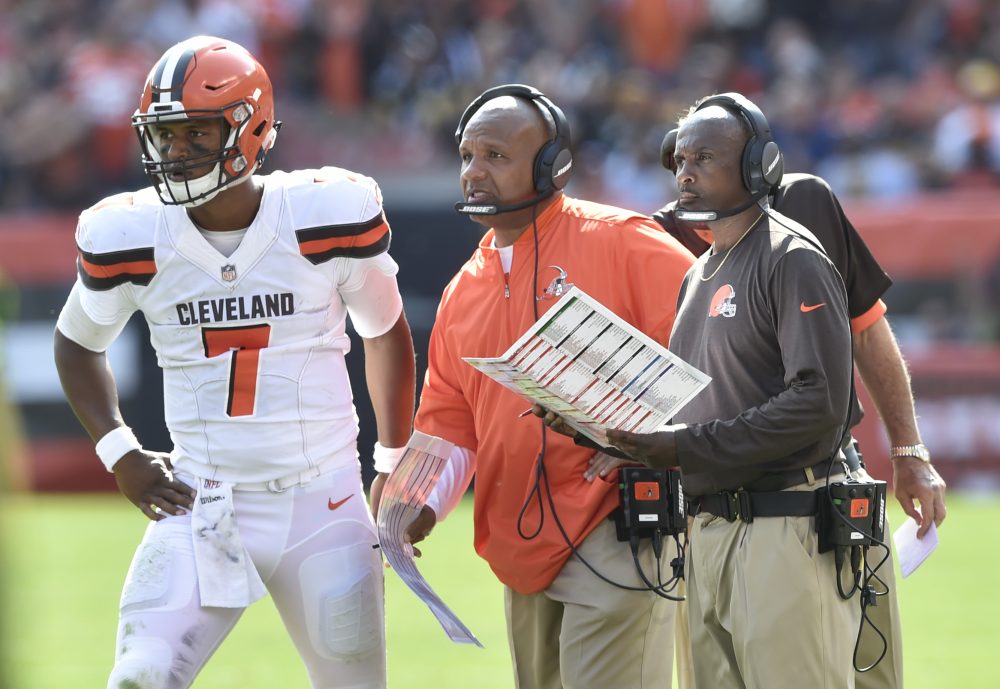 BEREA — Hue Jackson demands a lot from his quarterback.

Included on the long list is waking up at an obscenely early hour.

“I’m absolutely a crack-of-dawn guy,” he said Wednesday. “I do my best work in the morning so I try to get in around 5 every morning to try to get ahead on things to make sure that I can go accurately help my team out.”

Jackson is waiting for him when he arrives at team headquarters.

“I can’t let him beat me in the building,” Jackson said. “This is part of the process for him. I guarantee he wasn’t a crack-of-dawn guy before, but that has changed.

“That is just part of it. This is your job. There are things we do early and things we do late. This is going to become who DeShone Kizer is, and he understands that. That is the commitment you have to make to this football team and this organization.”

Kizer has embraced everything demanded by Jackson and all that comes with being a starting quarterback in the NFL. At 21 years old and after one game, he has already shown more commitment and maturity than some of his predecessors (read: Johnny Manziel).

“He is a stay-late-at-night guy, too,” Jackson said.

That’s the opposite of being a stay-out-late-at-night guy. (Again, read: Manziel).

“This young man is really coming on,” Jackson said. “I see him getting better in a lot of different areas, and that is what you look for. Now, he has to go play well and consistently week in and week out and give this team a chance to win.”

The late-at-night thing is relative — Kizer said he tries to get to bed by 9 o’clock. So almost all of his waking hours are spent in Berea.

On the players’ day off Tuesday he reported to the team facility and started preparing for his second start, Sunday in Baltimore. He game-plans on his own before getting the official one from the coaches Wednesday.

He did find time for a break.

“With a couple of the free hours I had, I was able to go over to University Hospitals Rainbow Babies & Children’s Hospital to spend some time there, reset my mind and get my mind back to some things that are going on off the field,” Kizer said.

Jackson’s reputation as a quarterback whisperer was greatly enhanced by his time with Joe Flacco in Baltimore. Flacco was the No. 18 pick in 2008 out of Delaware and Jackson was in the first of two seasons as Ravens quarterbacks coach.

Flacco was a surprise Week 1 starter as a rookie and went 11-5, leading a veteran Ravens team to the playoffs, where he won two games. He led the Ravens to a Super Bowl win after the 2012 season.

“Hue was part of a good team that I had my rookie year,” Flacco said on a conference call. “He painted a good picture of how things were going to go for the week, kept things clear and simple in my mind and allowed me to go out there and play quickly.

Jackson said he didn’t want to compare Flacco and Kizer because they’re different players on different teams at different times. But he gave a little insight into their differences.

“Joe probably wouldn’t come in at 5,” Jackson said. “He probably fought me a little bit on that. But Joe came in early, just not as early. He stayed later. Joe was really good, very bright, worked extremely hard.”

John Harbaugh was in his first year as coach of the Ravens when Flacco was a rookie. He was impressed with Kizer in the opener against the Steelers and said he’s in good hands.

“Super talented, super smart you can tell, a poised passer, big-arm guy, true pro-style quarterback,” Harbaugh said. “We have a lot of respect for Hue Jackson. Nobody has more knowledge or has had more success with developing rookie quarterbacks than Hue Jackson has had as a coach. We have seen it firsthand.”

Kizer has started to keep a notebook — real paper, not on a tablet — on the opponents. He’ll jot down tendencies of defensive coordinators and how cornerbacks and defensive linemen react.

The first two entries are two of the best defenses he’ll face this season. And two that will show up twice a year for the duration of his time with the Browns.

“It is always good to start with a tough opponent right out of the gate to prove to yourself that you can do it,” Flacco said.

“Absolutely. Schematically, that is as tough of a defense as we are going to see,” Kizer said of the Steelers, against whom he went 20-for-30 for 222 yards with a touchdown and interception. “They play almost every coverage very similar to Baltimore. It is a great one-two punch in the sense that you get to play two AFC North teams. Both schematically play three-down, four-down, have a great front seven and you are going to see every coverage they have.”

Jackson said he learned lessons from raising Flacco that will benefit Kizer. Even with the gauntlet to start his career.

“The scheduling sure isn’t nice to us, but that is OK because the growth that he will get out of these two games and growing as a football player, as a quarterback, as the leader of this football team, as a guy in the locker room and as a guy who is the face of this organization, this is what it is all about,” he said. “This is how you build a quarterback.”