DeShone Kizer out to avoid rookie hazing from Ravens 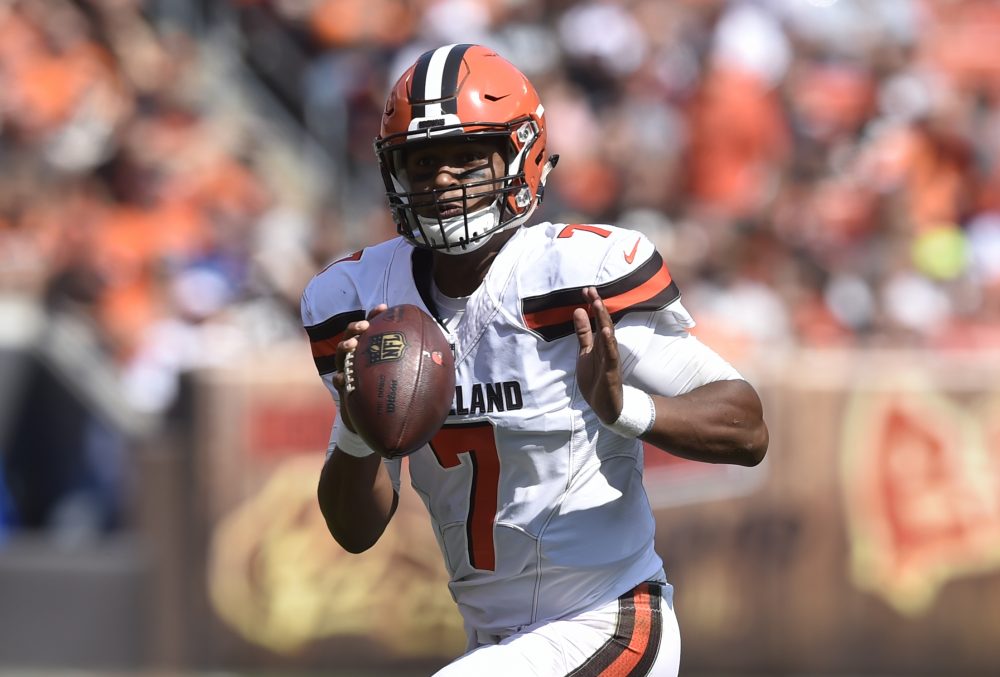 BALTIMORE — In his second NFL start, DeShone Kizer has a chance to be the first.

No rookie quarterback has beaten the Ravens at M&T Bank Stadium in coach John Harbaugh’s 10-year tenure. Ten have tried, 10 have lost, many have walked away bruised, bloodied and beaten down.

The rookies have combined for three touchdowns and 14 interceptions and been sacked 28 sacks, according to The Baltimore Sun.

For the Browns, Brandon Weeden in 2012, Connor Shaw in 2014 and Cody Kessler last year tried and failed. Weeden threw for 320 yards, Shaw hung tough into the second half and Kessler was yanked by coach Hue Jackson.


Kizer, 21, is trying to break the mold of the beaten and battered Browns quarterback. He wants to be the last name on the infamous jersey listing the 26 previous starters since 1999, and close the gap on Pittsburgh’s Ben Roethlisberger and Baltimore’s Joe Flacco in the AFC North.

“When you have a defense that is as stout as theirs and as consistent with the scheme that they have, you have to expect that rookie quarterbacks are not going to have success,” Kizer said. “For me, it is my job to take that as a challenge to see how much I can prepare myself to try and change that trend that they have been able to create.”

The Ravens’ home dominance of rookie quarterbacks is easy to explain. They’ve almost always had star-studded defenses, and the stadium in Charm City is extremely rude to guests.

From Ray Lewis and Ed Reed years ago to Terrell Suggs, C.J. Mosley and Eric Weddle now, the Ravens have had defensive stars that get the purple-clad crowd roaring.

This year’s crew got off to a perfect start with a 20-0 victory in Cincinnati. The Ravens forced five turnovers — four interceptions and a fumble — and sacked Andy Dalton five times.

Kizer went 20-for-30 for 222 yards, a touchdown, an interception and a rushing touchdown in the opening loss to the Steelers. He made a favorable first impression but was sacked seven times because he held the ball too long. He said he’s already learned to find the running back or tight end underneath, or throw it away instead.

“It is just a mentality. My mindset when I have the ability to run the ball is to always try to extend the play as much as I can,” he said. “That is just the next step in the process for me, learning how to get the ball in the right guy’s hand at the right time.”

Jackson made it clear that’s the area Kizer needs to improve the most from Week 1 to Week 2.

“Absolutely, the sacks. He can’t keep taking all of those hits,” Jackson said. “He has to do a better job of managing that, getting the ball out of his hands and just executing the offense.”

Avoiding turnovers against the Ravens will be just as important. Kizer was mostly careful with the ball against the Steelers — he does a good job of keeping two hands on it inside the pocket — but his interception came in the red zone and cost the Browns a scoring chance in a 21-18 loss.

The Ravens apply relentless pressure with playmakers at each level of the defense. Tackle Brandon Williams is a load inside, with Suggs rushing from the edge. Mosley is a tackler and turnover machine at middle linebacker. Weddle and Tony Jefferson form a nasty safety duo.

“It is one of the best defenses we will play all year,” Jackson said. “Their front seven is as good as anybody. (Mosley) is playing as good as I have seen him play. Terrell Suggs looks like he has found the fountain of youth all over again.

“The two inside tackles are as good as there is in football. The corners are good. The safeties are good.”

The Ravens were the only team to pitch a shutout in the opener, are tied for first with a plus-4 turnover ratio and rank fourth against the pass (144 yards) and fourth overall (221). They will try to rattle Kizer.

“He hasn’t had much experience going up against NFL-ready defenses. The more you can confuse the quarterback, the better stuff will happen,” Jefferson said. “So we’re going to try to do the best we can disguising. But let’s just let our defense play the way we know it can play, and the outcome will be what we want it to be.”

“From what we’re seeing so far, (Kizer) likes to hold the ball a little bit,” Mosley said. “The more disguise that we can do, the more we can keep him in the pocket.”

Kizer has embraced the one-two (hopefully not a knockout) punch of Pittsburgh and Baltimore to open his career.

“Welcome to the NFL. Welcome to the AFC North,” he said. “This is what we signed up for when Cleveland decided to bring me in here.”

He hasn’t played in a road game in more than nine months and said he’s looking forward to it. He said Notre Dame’s game at the University of Texas last year was the loudest crowd he’s experienced.

He played well against the Longhorns, but the Ravens will be a challenge on a whole different level. Under Harbaugh, the Ravens lead the league by allowing 16.4 points and a 74.4 passer rating per home game. They’ve gone 54-18 at home during that time.

Kizer was undaunted by the history.

“In the NFL, every team is good,” he said. “They are all going to be different from everything I did in college, but to go against two divisional opponents and to understand the importance of this for us to go out and at least win one of those. Obviously, we came up a little short against Pittsburgh, but now it is my job to do whatever I can to help my team get into a position to win this football game.”

Jackson spent the week getting him ready.

“If he is what I think he is, then he will rise up to the challenge and play the way I know he can play,” he said.