Notes: Myles Garrett out of boot, on stationary bike, has made “huge progress” 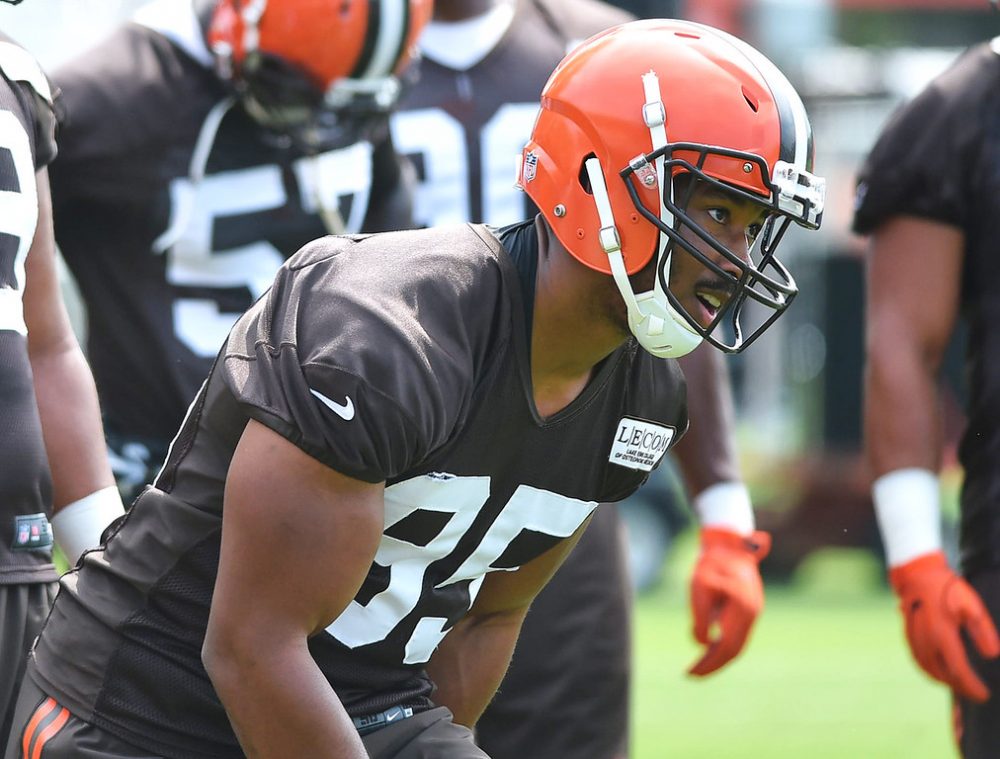 Instead of rehabbing inside team headquarters during practice, Garrett rode the stationary bike Wednesday while his teammates went through drills.

The No. 1 pick is getting closer to the field after sustaining a high ankle sprain Sept. 6 in practice, four days before the season opener. He was expected to miss four-to-six weeks.


The Browns play the Colts in Indianapolis on Sunday. Is Garrett that close to returning?

“Now, I’m not going to say that,” Jackson said. “Let’s just see where he is, but he’s getting there. There’s huge progress that’s been made. Hopefully we’ll see where he is.”

The Browns have missed Garrett in the losses to Pittsburgh and Baltimore. They have three sacks — two by linebackers – and rank 26th in sacks per pass play.

Jackson’s scheme and play calling have come under attack after the offense scored 28 points in the first two games. But he defended his dual role as head coach and offensive coordinator when told some critics believe he should hire a coordinator.

“People are entitled to their opinions, I respect them, but I don’t think that’s the case at all,” he said. “I think for those people who keep saying that, within this building, they’d probably be pulling their hair out and probably wouldn’t even walk through the front door.

“You’ve got to know how this works. You have to have been through this to get this over the hump, but I can see the light at the end of the tunnel and I think we will get there.”

Jackson says he’s frustrated by the slow progress of the offense.

“Trust me, I’m pulling my hair out,” he said. “There are things we have to do better to be the offense I want us to be. I never told you we’d be a juggernaut the first few games.

“We’re going to keep working at this. I think we’re getting there. We will arrive at some point in time.”

Outside linebacker Jamie Collins (concussion) wasn’t on the practice field and is unlikely to play against the Colts. He left the loss to the Ravens on Sunday in the fourth quarter.

James Burgess will move into the starting lineup. He was undrafted out of Louisville in 2016, finished last season on Cleveland’s practice squad and hadn’t played in an NFL game until the opener.

He has two tackles, a sack and a pass defensed in 21 snaps over two games.

“Obviously, it is big if you don’t have a guy like Jamie out on the field,” middle linebacker Joe Schobert said. “Burgess, who has taken his spot, is a guy we all trust. He knows what he is doing, and I’m sure he will step up and play great on gameday.”

Tank Carder was atop the depth chart at middle linebacker and “always had healthy knees” when his right anterior cruciate ligament ruptured in the second preseason game against the Giants. He was 10-15 yards downfield and jumped to avoid a block but when he landed the lineman made contact with the knee.

Carder, 28, had surgery and said he got off crutches Tuesday. He expects to be ready for training camp next year and thinks he’ll be able to participate in some capacity in organized team activities.

He’s taken a positive attitude despite losing the best chance of his career to be a starter.

“Just keep going on with my life. I can’t focus on the setback, got to focus on the comeback,” Carder said. “I had a 24-hour rule. Once that 24 hours was up, I quit worrying about it, I came to terms with it.”

Instead, they signed cornerback Reggie Porter to the active 53-man roster from the Baltimore Ravens’ practice squad.

Porter (5-foot-11, 185 pounds) is an undrafted rookie from Utah. He was originally signed by the Indianapolis Colts. He spent the first two weeks of the season on Baltimore’s practice squad.

He had 16 pass breakups and two interceptions in 36 games for the Utes.

Coleman, the No. 1 wideout, had surgery Monday to repair a broken right hand and was placed on injured reserve.

“And then I also have a little package with Duke Johnson, so we’ll be OK,” Jackson said. “We’ll be in a single wing, baby.”

** Defensive tackle T.Y. McGill (back) returned to practice in a limited role.

** For the Colts, quarterback Andrew Luck (shoulder) has been ruled out. Jacoby Brissett will start.