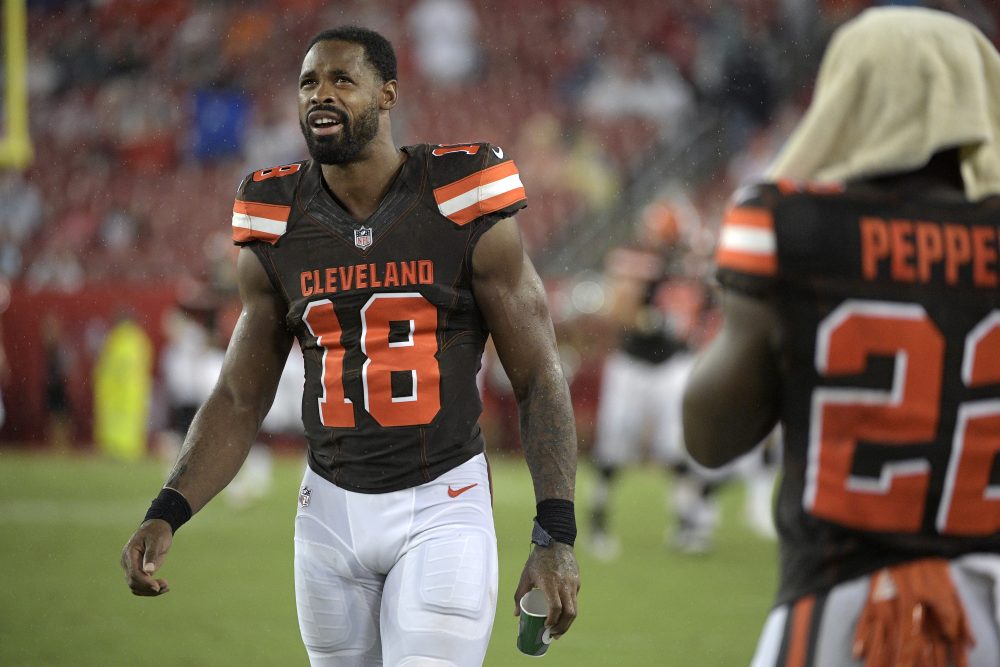 BEREA — The Browns need Kenny Britt to live up to his contract. They need him to play like the 1,000-yard receiver he was with the Rams last year. They need him to be the veteran leader at an extremely young position group.

The Browns need Britt more than ever with No. 1 wideout Corey Coleman out for at least eight weeks with a broken right hand.

“I’ve challenged our guys every day, and I’ve challenged him that he needs to step up and make plays, and I think he will. I really do,” coach Hue Jackson said Thursday. “Kenny is the elder statesman in that room, and I think he’ll raise up and help lead these young guys, and we’ll go play good this week.”

Britt signed a four-year, $32.5 million contract with $17 million guaranteed as a free agent in March. He has two catches for 15 yards in two games, had a fourth-quarter drop in the opener that Jackson called “inexcusable” and didn’t turn around for a pass Sunday against the Baltimore Ravens that was nearly intercepted.

Britt, who turned 29 this week, said Jackson met with him “man-to-man” to pose the challenge and he willingly accepted.

“He wants me to step up, bring more energy to practice and in the classroom, because we’re leading down a path that we didn’t believe we were going to go,” Britt said. “Oh-and-2 is not where we wanted to be, and it’s not where we’re going to stay.

They want him to make plays and to lead. He said he’ll do the latter by setting a good example.

“It’s doing all the right things, doing all the small things, and that’s what’s been killing us the last two weeks was the details of things, finishing on certain plays and things like that,” he said. “That’s something that we’ve been doing since OTAs and in camp. We took a step back from that and we just need to get back to that.”

Fans quickly lost patience with Britt, whose struggles started in the preseason. He’s been a target for mean tweets and been compared to free agent receiver bust Dwayne Bowe, who was signed in 2015 for $9 million guaranteed, showed up out of shape and caught five passes in seven games before being cut.

“I think in the years since his freshman year in college I’ve never seen anything bother Kenny,” said cornerback Jason McCourty, who was teammates with Britt at Rutgers and for five years with the Tennessee Titans. “No matter what he’s gone through, somebody yells at him, have a bad game, have a bad practice, he’s going to come in here with a big smile on his face, and he’s going to be ready to roll.

“He doesn’t worry about anything outside, about somebody criticizing whatever’s going on, whether he dropped a pass before, he just goes and plays, let’s it rip. This is his ninth year as well, so he’s shown he can play. So I’m just looking forward to him going out there and doing what he does.”

Coleman, the No. 15 pick in 2016, leaves a significant void at a position that was already a weakness. Jackson has been searching for three or four receivers he can rely on and will continue shuffling the lineup until enough step up.

“We’ve all got to come together and pick up the slack because we know how important Corey is to this offense and to the receiver room,” Britt said. “We’ve all just got to band together and be out there as one unit.”

Rashard Higgins did his part against the Ravens after earning a promotion from the practice squad with a strong week of practice. He led the team with seven catches for 95 yards out of the slot.

Sammie Coates doesn’t have a catch since being acquired from the Steelers in a trade before Week 1 and hasn’t practiced this week with an injured hamstring. Ricardo Louis, Kasen Williams, Reggie Davis and Jordan Leslie — who could be promoted after signing to the practice squad this week — are the options to join Britt and Higgins as primary targets for rookie quarterback DeShone Kizer on Sunday against the Colts in Indianapolis.

“The guys have all rallied to a man,” Jackson said. “They understand there’s a job we’ve got to get done. They’ve gone out to practice with Coach (Al) Saunders and done a really good job.

“Part of this is knowing what to do, being accountable, being in the right spot at the right time.”

Britt has gotten open during the first two games but hasn’t been in sync with Kizer. Britt said they’re on the same page but continue to try to develop the necessary timing.

“He’s young, he’s a rookie, there’s some things with his footing and our route depths, it’s got to time up and that’s something we’ve been working on,” he said.

Britt’s teammates haven’t given up on him.

“Kenny’s been good since he got here,” cornerback Jamar Taylor said. “Obviously, they paid him. I think preseason, he didn’t get to play that much. But Kenny can stretch the field. He can be a jump-ball guy. He can be possession guy. He can be a deep-ball guy. He’s physical. He loves to block. He played in L.A. with Gregg (Williams, defensive coordinator), so he’s got the same personality, just a tough, hard-nosed football player.

“But he’s capable of doing whatever he wants to do. We’ve just got to get the ball in his hands.”

And Britt needs to catch it.

Isaiah Crowell has his mind on the money and wants the ball more; Hue Jackson says he’ll get it but better take advantage
Jason McCourty impresses (much) younger teammates with strong play at cornerback at 30