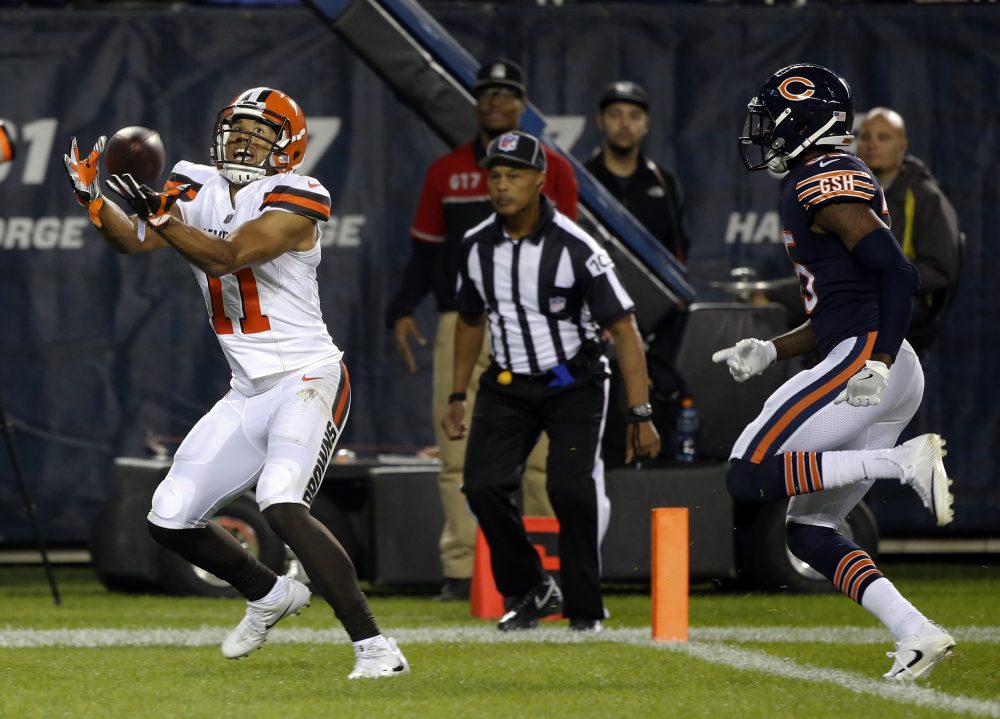 BEREA — Outside linebacker Jamie Collins (concussion) was ruled out and rookie defensive end Myles Garrett (high ankle sprain) was listed as doubtful for Sunday’s game against the Colts in Indianapolis, meaning the Browns will most likely be without arguably their two most talented defensive players.

The good news is that Garrett, the No. 1 pick, is getting closer to returning. He hasn’t practiced or played since injuring the ankle Sept. 6 in practice, and just got out of the walking boot this week.

“He did some things today,” coach Hue Jackson said. “He is getting closer.”

The Browns don’t want to rush back Garrett before he’s ready.


“I think we will be cautious with him,” Jackson said. “We will make the best decision here very shortly after we know more, see more and go from there.”

Collins was injured in the fourth quarter Sunday in the 24-10 loss to Baltimore. Collins has 11 tackles and a forced fumble in two games, but coordinator Gregg Williams said his value goes well beyond the numbers.

First-year player James Burgess will make his first NFL start in place of Collins. He has two tackles, a sack and a pass defensed in limited action this season.

“It is a really big responsibility replacing a guy like Jamie Collins, a Pro Bowler,” Burgess said. “I come to practice every day to work, whether it is five plays, 10 plays or 100 plays. I don’t change my approach. That is a big role, but I like to do what James Burgess can do.”

“He has instincts, and he is tough,” Williams said. “When I say instincts, he understands where the ball is going before the ball goes there so he just gets off and goes and train wrecks it. I will live with that.”

Receiver Jordan Leslie is all the way back.

The Browns elevated him from the practice squad and he’s expected to make his NFL debut Sunday. Receiver Reggie Davis was waived to make room.

Leslie (6-foot-1, 205 pounds) led the Browns in the preseason with two receiving touchdowns, and added nine catches for 93 yards, but was waived in the final cuts. He was re-signed to the practice squad Tuesday after No. 1 wideout Corey Coleman broke his right hand Sunday.

“A week ago I was sleeping on my brother’s couch thinking this could be it for my NFL career and now I’m getting this opportunity,” Leslie posted on social media.

Kenny Britt and Ricardo Louis are expected to start at receiver against the Colts, with Rashard Higgins in the slot. Leslie and Kasen Williams are the other options.

Davis, a rookie, was claimed off waivers from Atlanta after the final roster cuts. He was inactive the first two games.

Much has been made about rookie Jabrill Peppers consistently lining up 25 or 30 yards off the line of scrimmage, but Williams said his free safeties have always done that. And he said it’s working.

“When you take a look at how well he has played, there have only been four passes thrown farther than 20 yards against us this year — two have been interceptions, one has been an incompletion and one was caught by (Steelers receiver) Antonio Brown that still (ticks) me the F off,” Williams said of Brown’s 38-yard catch among three Browns. “That was a punt. That wasn’t a throw. That ball should have been knocked down, carted off or turned over.”

Williams said Peppers is the only defensive back on the roster that can fill the role as the last line of defense.

“I have given every single defensive back a chance to prove that you can be the angel of this defense,” Williams said. “The angel is the person who covers everybody else up. He is the angel.”

“I was happy for him that he had an opportunity to say what is on his heart, and we support him,” Wilson said. “We are all hoping that things work out for him in the long run and he performs real well and has an opportunity to stay here for a while.”

** Linebacker Christian Kirksey was fined $9,115 for unnecessary roughness. He was penalized for shoving Ravens left tackle Ronnie Stanley after a play.

Notes: Hue Jackson preaches patience with DeShone Kizer, warns of highs and lows to come
Notes: Jamar Taylor blames self for T.Y. Hilton’s big day but gets mad when his effort’s questioned