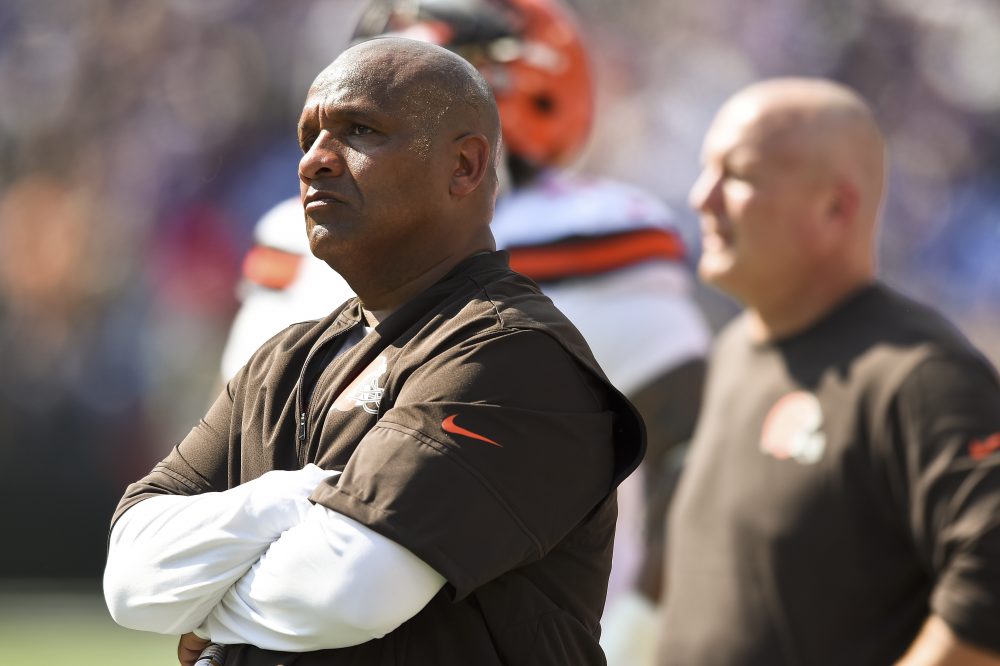 BEREA — A must-win is a relative term.

There are the true must-wins, when a loss eliminates a team from the playoffs or playoff contention.

Then there’s the just-about must-win, where a loss all but finishes a team’s playoff dreams.

Then there’s the Browns’ must-win. And it has nothing to do with the playoffs.

They must win a game to feel better about themselves.

They must win a game to validate the organization’s belief the team is significantly improved from last year’s franchise-worst 1-15 season.

They must win two games over the next three-week stretch to ease the pressure on Jackson, who’s beginning to take heat from some fans and media members.

As difficult as it is opening the season against the Pittsburgh Steelers and Baltimore Ravens, the next three weeks are an oasis in the desert. The Browns can’t let the stretch turn into a mirage.

The next three opponents on the schedule — the Colts, Bengals and Jets — are winless and reeling. The Browns are winless but they aren’t reeling.

The Browns opened the season with 14 straight losses a year ago, so looking for win No. 1 in Week 3 is hardly new territory, or reason to panic. But they must take advantage of this letup in the schedule.

The geniuses in Las Vegas have installed the Browns as a slight favorite for Sunday’s trip to Indianapolis to face the 0-2 and Andrew Luck-less Colts. The Browns haven’t been favored since Week 14 of 2015 against the San Francisco 49ers. That doesn’t mean the Browns will win, but it does mean it won’t be an upset if they do.

Then they return home for the Bengals and Jets.

Cincinnati has scored nine points, and no touchdowns, in two losses. Offensive coordinator Ken Zampese was fired. The Bengals head to Green Bay this week and are staring 0-3 in the face.

Then come the Jets, who are 0-2 and determined to get the No. 1 pick in the draft. New York media are spending more time discussing USC quarterback Sam Darnold than Jets starter Josh McCown.

Five wins for the Browns this year would exceed my prediction by one and signify a tremendous step forward from last year. The road to five starts in Indianapolis.

“Even though we lost, those are the two best teams in our division, and we know what it takes,” receiver Ricardo Louis, who’s expected to start in place of the injured Corey Coleman, said of the Steelers and Ravens. “Indianapolis, they’re just going to have to feel it ’cause we’re coming with it.

“I know for a fact I’m coming with it and I’m going to bring my team along.”

Jackson opened the week by reminding everyone the Browns faced two playoff contenders to open the season. He added that the feeling in the building is “nothing like” what he felt a year ago.

He ended the week discussing what a victory at this stage of the season would mean.

“It would be outstanding. We need to win,” he said. “It would boost everybody’s morale — the organization, our players, everybody — because that is where we want to get to as fast as we can.”

Owner Jimmy Haslam has done nothing but rave about Jackson since he arrived, and Jackson talked during the week about Haslam’s patience and understanding of the rebuilding process. But Haslam has never kept a coach longer than two seasons, so Jackson shouldn’t count on that patience persevering without an unspecified number of wins — probably between four and six.

The players are ready to start filling up the win column.

A win this early would allow Jackson, the locker room and the organization to exhale. The focus could then shift back to the development of rookie quarterback DeShone Kizer and the small victories Haslam mentioned during training camp.

Kizer is coming off what he called “one of my poorer performances that I’ve ever had,” when he threw three interceptions and lost a fumble against the Ravens. He said he wants to prove to his teammates, the fans and the organization “the type of guy that I actually am.”

His first win would go a long way.

“You go 4-0 in the preseason and you get a little taste of winning in your mouth. The feel in the locker room, the vibe was ecstatic,” Kizer said. “Now we want to get back to that.”

The players agreed with Jackson that there’s a different vibe compared to last year. Louis said they’re finding ways to not let the “here we go again” negativity creep in.

“We don’t want to accept losing at all,” he said. “We’re going to go to Indianapolis and we’re going to handle business.”

Browns-Colts Preview: Myles Garrett inactive but works out before game; 3 points of interest; 3 numbers to watch; the pick
Players shocked and offended by President Donald Trump’s comments, 20 kneel before game vs. Colts