Colts 31, Browns 28: The breakdown — thumbs up, thumbs down, the matchups 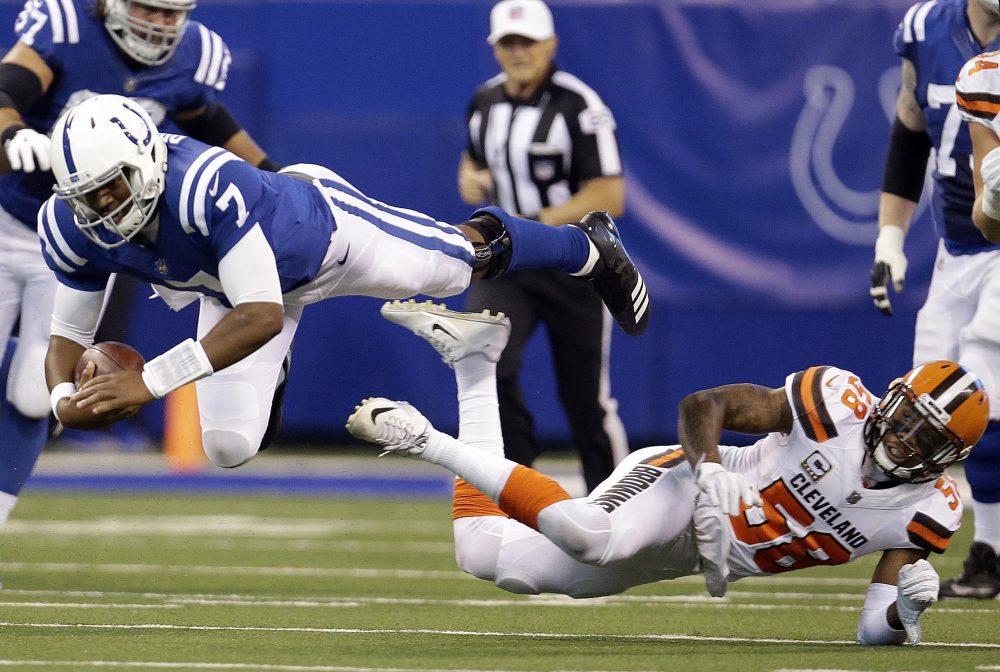 The Browns hoped they could take advantage of Brissett’s inexperience in only his fourth NFL start.


Brissett beat the Browns with his arm, legs and brain.

Acquired in a trade with New England right before the season, Brissett looked like he’d been running coordinator Rob Chudzinski’s offense for years. He went 17-for-24 passing for 259 yards, a touchdown and a 120.0 rating. He also rushed for two touchdowns, from 5 and 7 yards.

Brissett put up 31 points and had the Browns defense off-balance throughout the first half.

“He did a great job in managing things today,” Colts coach Chuck Pagano. “They gave us a lot, a bunch of different looks. It’s a really good defensive unit that they have and I thought he managed things well, protected the ball and he made big plays.”

Six targets, three drops, one catch for 10 yards. Louis bombed in his first start in place of the injured Corey Coleman.

It’s fair to wonder if he’ll get another.

Louis is big, fast and strong. But he’s yet to show he can be counted on to make the catch. In limited opportunities in the first two games he struggled to hang on, and that continued against the Colts when he was needed most.

The biggest drop came in the second quarter on a go route. Louis ran past the cornerback and DeShone Kizer made a great throw. It could’ve been a touchdown.

“Possibility. Possibility,” Louis said. “That’s the thing with playing in this game, you have ups and downs. If you expect for it to be perfect all the time, nine times out of 10 it’s not going to be like that. It’s all about how you come back, how you bounce back, and that’s what I’m all about. I’m getting back to work this week and I put in a lot of work, overtime. So let’s see what happens next week.”

Call it the overlooked play of the game.

The Browns were still within two scores with nearly the entire fourth quarter remaining. The defense had forced a fourth-and-2 at the Cleveland 40-yard line with 14:14 left. The Colts kept their offense on the field, but it seemed obvious they were just trying to draw the Browns offside.

He jumped into the neutral zone, the flag flew, he was penalized 5 yards and the Colts had a first down.

Yards allowed by the Browns defense in the first half.

“Once again, this is a tragedy in this country that we have to sit here and still have these discussions. I know for a fact that I’m no son of a b—- and I plan on continuing forward and doing whatever I can from my position to promote the equality that’s needed in this country.” — Browns quarterback DeShone Kizer, responding to comments from President Donald Trump.

DeShone Kizer needs more help from the receivers, the run game and the game plan. Running back Duke Johnson had more than 100 yards from scrimmage and showed good second effort.

The Colts exploded for four straight touchdowns in the first half, then shut it down.

The Browns laid a giant egg in a matchup it looked like they could dominate. Cornerback Jamar Taylor and coordinator Gregg Williams had no answer for receiver T.Y. Hilton.

The Colts pressured Kizer early, and cornerback Rashaan Melvin had two third-quarter interceptions that kept them out in front.

Zane Gonzalez made four extra points. The return game did nothing.

Ageless Adam Vinatieri made the field goal that wound up being the difference.

Hue Jackson better get a win — and in a hurry.