DeShone Kizer leads comeback try, but teammates let him down with drops, penalties in loss to Colts 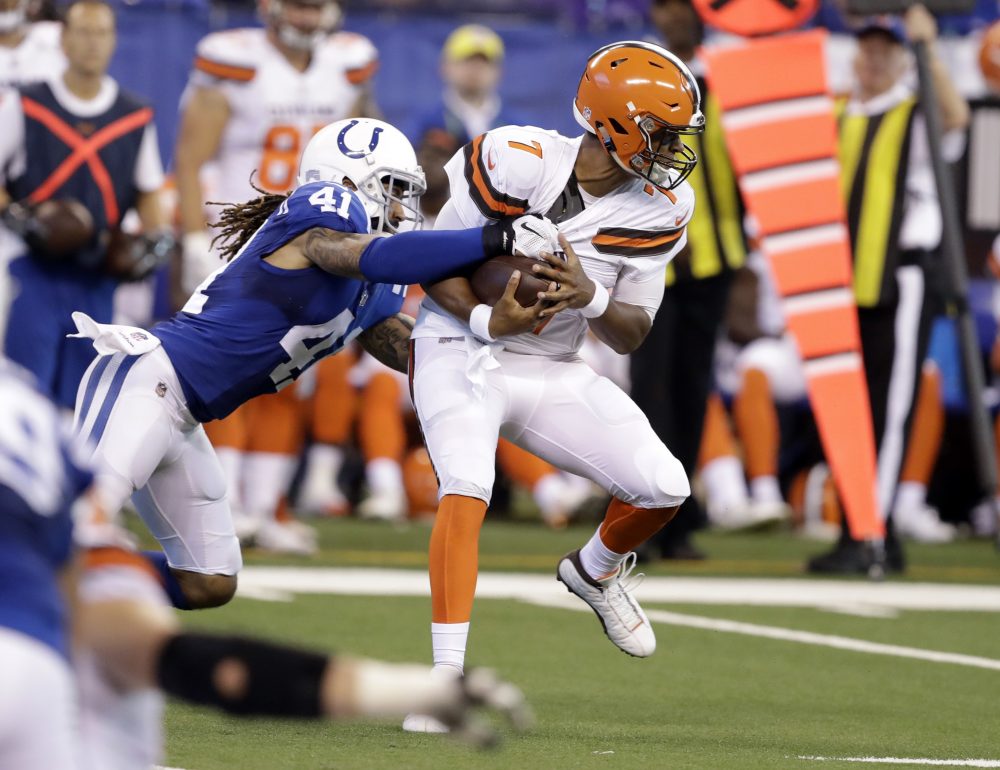 INDIANAPOLIS — Receiver Ricardo Louis had a half-step on the cornerback on a go route down the left sideline. The throw was perfect. He dropped it.

Tight end Seth DeValve caught a 25-yard crossing pattern to move the Browns deep into Colts territory. He was called for offensive pass interference, wiping out the play. The promising drive ended after a sack on the next play.

Rookie quarterback DeShone Kizer wasn’t perfect Sunday in a 31-28 loss to the Indianapolis Colts. But he was better than the statistics said he was. He finished 22-for-47 for 242 yards, two touchdowns, a rushing touchdown, three interceptions, a sack and a 50.1 rating.

The Browns dropped at least six passes — what constitutes a drop is highly subjective — and were called for four offensive pass interference penalties. The miscues not only cost Kizer completions and yards, they short-circuited numerous drives as the Browns fell behind 21-7 and 31-14 and were unable to claw all the way back despite Kizer pulling them along.


“I wish I could explain the drops. I can’t,” coach Hue Jackson said. “The pass interference, I need to go back and see those. We run the same crossing routes as everybody else.”

Louis led the way with three drops. Receiver Kenny Britt added one, two or three, depending on the observer. DeValve and receiver Rashard Higgins had one each.

Kizer insisted he wasn’t frustrated by them.

“There’s a lot of opportunities for me to put the ball in better places, and allow our receivers to have a better opportunity to catch the ball,” he said. “In order for us to move forward as an offense I’ve got to make sure the ball’s in the right spot at the right time.”

The organization has talked about doing the right things to raise and support its 21-year-old quarterback. Catching the ball would be a good start.

“We talk about it all the time. We’ve got to make plays for him,” Jackson said. “We didn’t do it today. It’s just that simple.”

Louis started in place of Corey Coleman, who’s out for at least eight weeks with a broken hand.

“It’s very tough, man, because you’re just missing plays and leaving plays on the field,” Louis said. “But that just means we’ve got to get back to work.”

After the Colts scored touchdowns on four straight drives in the first half, Kizer tried to mount a comeback. He started with a 1-yard touchdown to rookie tight end David Njoku at the end of the half, but it was derailed with two interceptions in the third quarter.

From the Colts 17-yard line, Kizer threw well wide of receiver Kasen Williams, who turned to the inside.

“That ball couldn’t have been caught,” Kizer said.

“One play for us can make the difference in the game,” Jackson said.

From midfield later in the quarter, Kizer threw for Britt down the seam but the ball was behind him and deflected to cornerback Rashaan Melvin for his second interception of the quarter.

Jackson said Kizer did the right thing and Britt should have slowed the route short of the safety.

“Sometimes you have to make those catches,” Jackson said.

“I was always told if it touches your hands you can catch it,” Britt said. “So regardless of where the pass is my job is to always make the quarterback look good.”

Britt had an up-and-down day. At least it wasn’t all down for a change.

The embattled receiver caught a 38-yard go route to set up a touchdown in the first half and caught an 11-yard touchdown on his rear end in the fourth quarter to trim the deficit to 31-21 with 6:56 left. Britt, who entered with two catches for 15 yards, also allowed former Browns cornerback Pierre Desir to break up a pass that was in Britt’s arms, he dropped a hook and he and Kizer still don’t look to be on the same page. He had three catches in 10 targets for 54 yards.

“The game would have gone a lot different if we would have executed every play,” Britt said. “I know (the receivers) can play at a higher level. We’ve got to go out there and make plays for our quarterback.”

Kizer was pressured often but sacked only once. He was OK after a shot to the knee from safety Malik Hooker that was penalized.

Kizer again showed resilience, leading two touchdown drives in the final nine minutes to at least give the Browns the chance for a miracle win.

He’s shown his teammates something with the way he’s handled adversity and continued to battle.