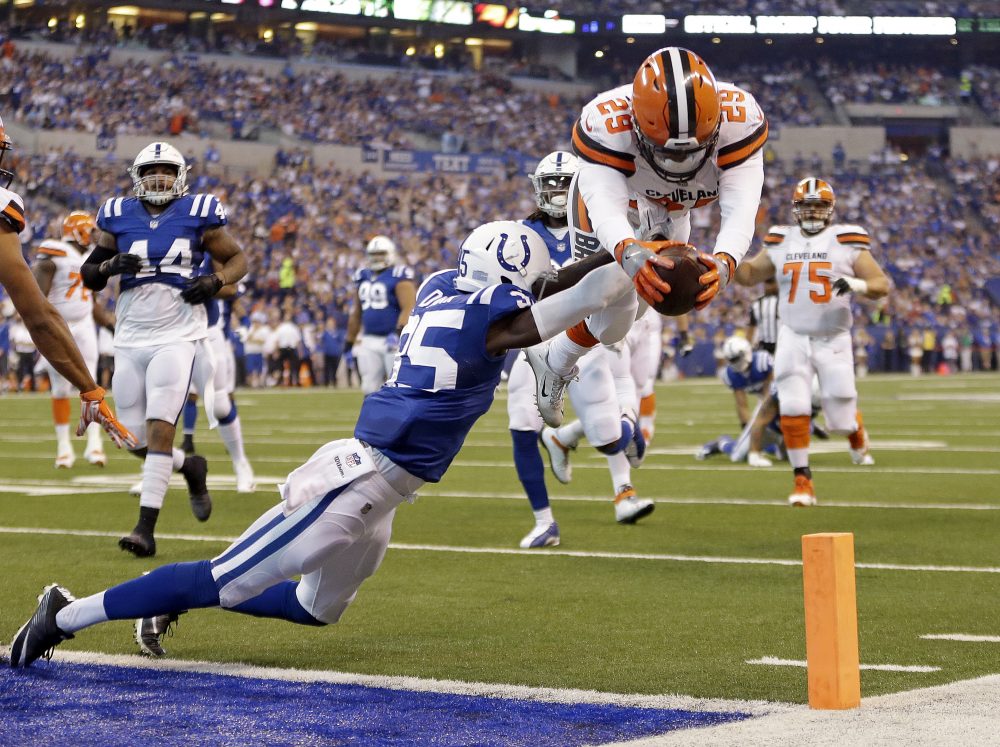 INDIANAPOLIS — Coach Hue Jackson has no hair on his head to pull out. He should have whiplash for all the times he shakes his head on the sideline in disgust and disbelief. He reached his wit’s end about 10 months ago.

The frustration mixed with disappointment and anger Sunday after another loss, this time 31-28 to the Indianapolis Colts when a furious fourth-quarter rally led by rookie quarterback DeShone Kizer fell short after two failed onside kicks.


“Nobody’s down. Nobody’s throwing in the towel or anything like that,” he said. “I’m p—– off because we want to win, deserve to win. But we have to do the things that help you win.”

The Browns once again did the things that make you lose.

The supposedly much improved defense of coordinator Gregg Williams allowed 28 points and 260 yards in the first half, as fill-in quarterback Jacoby Brissett rushed for two touchdowns, receiver T.Y. Hilton repeatedly torched cornerback Jamar Taylor and the Colts went 5-for-7 on third down to take control.

The Colts were 0-2 and had scored 22 total points. They were without Pro Bowl quarterback Andrew Luck and center Ryan Kelly, their best offensive lineman.

None of it mattered.

The backbreaker was a five-play, 97-yard touchdown drive for a 21-7 lead with 5:14 left in the first half. Safety Derrick Kindred dropped Robert Turbin for a 2-yard loss to start the possession, then the Colts went to work.

Brissett threw 34 yards to Donte Moncrief, Frank Gore ran for 4 and Brissett threw incomplete. On third-and-6, Brissett hit Hilton on an out with Taylor in coverage. Hilton turned upfield, rookie safety Jabrill Peppers whiffed on the tackle and stumbled to the turf and Hilton went the rest of the way for the 61-yard touchdown.

“I got picked,” Taylor said. “He motioned. He had an option route. He just broke back out. Good option play.”

Brissett went 17-for-24 for 259 yards and a touchdown passing in his fourth NFL start. Hilton caught seven passes for 153 yards, despite being the only true playmaker on the Colts offense.

“It’s disappointing, I am not going to sit here and sugarcoat that,” Jackson said of Hilton’s big day. “That’s the guy that we targeted and wanted to slow down. We weren’t able to slow him down.”

The first two losses to start the season were expected, coming against Pittsburgh and at Baltimore. But the Browns entered Lucas Oil Stadium a slight favorite, the first time the oddsmakers expected them to win since 2015.

So this loss stung. For a variety of reasons.

The Browns tried to rally, cutting the deficit to 28-14 at the end of the fist half on a 1-yard touchdown throw from Kizer to rookie tight end David Njoku. But two promising possessions in the third quarter ended with Kizer interceptions.

On the first pick, receiver Kasen Williams cut inside when Kizer appeared to think he’d cut outside. On the second, the throw was behind receiver Kenny Britt on a skinny post and bounced off his hands. Cornerback Rashaan Melvin intercepted both.

Jackson blamed Kizer for the misfire to Williams, and Britt for not stopping short of the safety. Kizer took responsibility for both.

“Turnovers are the name of the game in this league, and we went out there and had two crucial ones in prime opportunities and moments for us to go down and change the momentum of the game.”

Kizer went 22-for-47 for 242 yards, two touchdowns, three interceptions, a 50.1 rating and a 1-yard sneak for a touchdown. He was intercepted on a Hail Mary attempt from his end zone to end the game, giving him seven interceptions in three games.

He was much better than his numbers, as he again didn’t get much help from his supporting cast. There were at least six drops to go along with four offensive pass interference penalties.

He kept his composure despite a lot of pressure from the Colts defense and kept battling until the final second, leading two touchdown drives in the final nine minutes.

The Browns return to FirstEnergy Stadium for the next two games, against the 0-3 Cincinnati Bengals and the 1-2 New York Jets. Jackson said he sees improvement but isn’t satisfied.

“It’s just not happening fast enough,” he said. “So, my mindset is, we need to coach better. Then we’ve got to make sure players are getting it and getting it right.

“Nothing magical is going to happen. There’s no new players or anything like that are going to come in. We have to get better. It’s as simple as that.”

“It’s just disappointing to be 0-3 right now,” he said. “It’s not where we thought that we would be. It’s where we are. It’s what we’ve earned. So we’ve got to go from there.”

Players shocked and offended by President Donald Trump’s comments, 20 kneel before game vs. Colts
DeShone Kizer leads comeback try, but teammates let him down with drops, penalties in loss to Colts