Notes: Jamar Taylor blames self for T.Y. Hilton’s big day but gets mad when his effort’s questioned 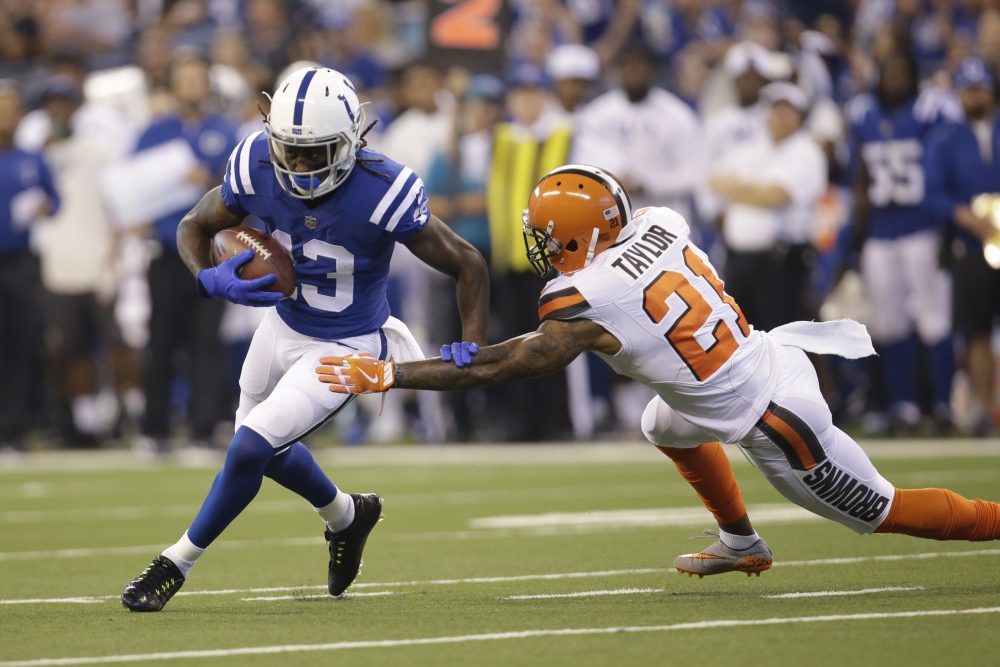 INDIANAPOLIS — Cornerback Jamar Taylor took the blame for Colts receiver T.Y. Hilton catching seven passes for 153 yards and a touchdown.
Taylor wouldn’t accept the notion he didn’t run hard on Hilton’s 61-yard catch-and-run for a touchdown in the second quarter of Indianapolis’ 31-28 victory Sunday.
“For you to question my effort just kind of p—– me off. So please,” Taylor told a reporter.
Hilton caught an out route with Taylor in coverage, turned upfield and wasn’t stopped. Safety Jabrill Peppers whiffed on a tackle and stumbled to the ground.
“I was running. I was running. I got picked and I was running after him,” Taylor said. “He turned it on. That dude has a whole other gear. I would never quit on a play. I would never quit on my teammates. They know that. I spend too many f—— hours in the film room.”
The Browns identified Hilton as the Colts’ No. 1 threat yet weren’t able to stop him until the second half, after the Colts had built a 28-14 lead.
“The dude’s a crafty guy and they had a great game plan,” Taylor said. “I’ve got to be better. I put this on me. He had 145 receiving yards or whatever it was, and that’s on me.
“So I’ve got to come back to work, put my hard hat on and come out ready next week to play.”
Hilton’s huge day followed Pittsburgh’s Antonio Brown catching 11 passes for 182 yards in the opener. The Browns cut No. 1 cornerback Joe Haden 11 days before the season, and coach Hue Jackson was asked if they have the personnel to cover a star wideout.
“Obviously today everybody’s going to say that we don’t,” Jackson said. “There are some things that we did in the second half that made up for that, some things that we can do better. That’s what we have to do. It’s just where we are right now.”

A CATCH TO REMEMBER
Jordan Leslie, 25, fulfilled a lot of dreams in a few days.
He was sleeping on his brother’s couch a week ago, signed to the practice squad Tuesday and elevated to the active roster Friday for the first time in his career. He played in an NFL game for the first time against the Colts and made his first catch one he’ll never forget.
Late in the first half, he ran down the right sideline, leaped, extended his right arm and controlled it enough to secure the grab with both hands. The 26-yard gain put the Browns at the 2-yard line and set up a touchdown.

It was the only time he was targeted.
“With our style of offense and the system that we run, we’re not necessarily setting up for certain guys to get the ball,” quarterback DeShone Kizer said. “Unfortunately, after that play the defense didn’t allow us to get the ball back to him.”

LETHAL WEAPON
Running back Duke Johnson provided a spark to a stagnant offense. He led the team with six catches for 81 yards and rushed for 23 yards and his first touchdown of the season, a 19-yarder.
“Duke Johnson is lethal when the ball’s in his hand,” Kizer said.
The second-quarter touchdown run started slow but ended with a flourish.
He took a short pitch to the left, appeared to be stopped but got away from Colts linebackers John Simon and Jon Bostic. He sprinted upfield, then completed the score by diving into the front corner over former Browns cornerback Pierre Desir.

NOT READY YET
No. 1 pick Myles Garrett (high ankle sprain) missed his third straight game to open his NFL career. He was inactive as expected after being listed as doubtful on the injury report.
Garrett, a defensive end, is getting closer to a return and worked out before the game with an athletic trainer. He ran and did agility drills.
He hasn’t practiced since a teammate fell into his right leg Sept. 6, four days before the opener. He could return to practice this week and possibly play Sunday against the Cincinnati Bengals at FirstEnergy Stadium.
The Browns were also without starting outside linebacker Jamie Collins, who suffered a concussion last week in a loss to the Ravens.