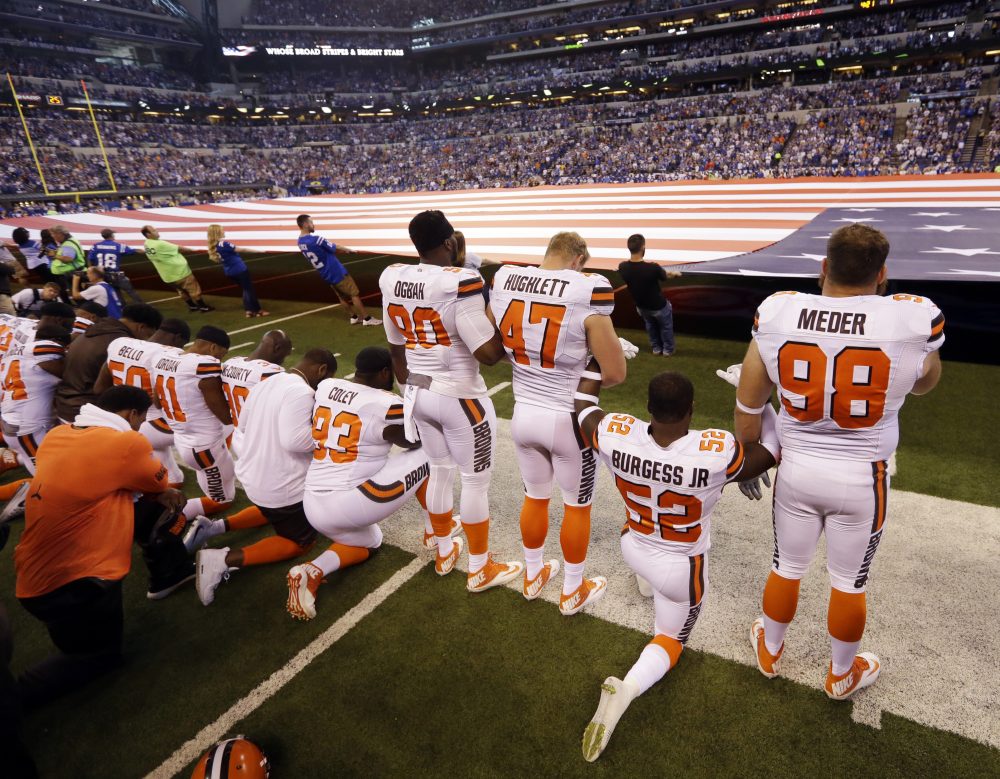 INDIANAPOLIS — President Donald Trump’s choice of words for NFL players who kneel during the national anthem left many Browns shocked, offended and compelled to respond.
“Once again, this is a tragedy in this country that we have to sit here and still have these discussions,” rookie quarterback DeShone Kizer said Sunday following a 31-28 loss to the Indianapolis Colts. “I know for a fact that I’m no son of a b—- and I plan on continuing forward and doing whatever I can from my position to promote the equality that’s needed in this country.”
Approximately 20 Browns players kneeled during the national anthem at Lucas Oil Stadium in response to Trump’s harsh comments. The kneeling players locked arms, as well as many of the players who stood, in a show of unity.
Cornerback Jason McCourty, No. 1 pick Myles Garrett, linebacker Christian Kirksey, safety Jabrill Peppers, cornerback Jamal Taylor, running back Isaiah Crowell, receiver Kenny Britt, safety Ibraheim Campbell and rookie defensive tackle Larry Ogunjobi were among the kneelers.
Kizer locked arms with defensive end Nate Orchard and an assistant coach. A few players stood by themselves. A smaller group of Colts players also kneeled.

“Wouldn’t you love to see one of these NFL owners, when somebody disrespects our flag, you’d say, ‘Get that son of a b—- off the field right now. Out! He’s fired,’” Trump said to cheers Friday at a rally in Alabama.
If Trump had his way, at least a dozen Browns would’ve been fired during the preseason. Twelve players kneeled in a prayer circle during the anthem before a preseason game, following violence at white supremacist rallies in Charlottesville, Va.
For the opener, the players were joined running out of the tunnel by police, military and first responders. The players all stood for the anthem, many locking arms with police and military. A video was shown on the scoreboards featuring players discussing the importance of unity.
The initial anthem protests, started last year by currently unemployed quarterback Colin Kaepernick, were to call attention to social injustice and inequality. The leaguewide demonstrations Sunday, which included the Steelers and Seahawks staying in the locker room for the anthem, were more a reaction to Trump.
“My mom is not what he says she is,” Pepper said. “Just a bunch of contradictions with him.”
Before the game, owners Jimmy and Dee Haslam called for unity and denounced the comments of Trump as “misguided, uninformed and divisive.” Owners across the league took a similar stance.
“We view our organization, our league and our players as great unifiers of people,” the statement read. “Our players, just like so many others across our league, have been honest and thoughtful with their attempt to bring awareness to the issues of inequality and social injustice.
“We must not let misguided, uninformed and divisive comments from the President or anyone else deter us from our efforts to unify. Our stance in support of the liberties of peaceful, personal expression afforded to our players and all Americans will remain strong.”
Some fans booed when the players dropped to a knee, and Cleveland running back Duke Johnson gestured toward the crowd as if to encourage more. McCourty, who said he was shocked when he heard Trump’s comments, said he’s used to boos on the road but noted the contrast between the ones Sunday for taking a knee and the cheers at the Trump rally when he attacked the players.
“To actually watch the video and see how just casual he stayed. It’s just like, ‘Wow,’” said McCourty, a three-time team captain and Walter Payton Man of the Year during his time with the Tennessee Titans. “Like, ‘Really, that’s the way we’re thought of?’ That’s not how we want to be referred to.”
McCourty feels an obligation to take advantage of the small window in which he has a large platform to be heard. He said if he didn’t do anything, he’d be letting down his family, friends and people back home
He also made it clear taking a knee had nothing to do with the flag, the military or police.
“My father served before he passed away. My brother fought in the Persian Gulf War, my stepdad fought in the Vietnam War,” McCourty said. “I’d let those guys know, I’d let anybody that would ask know that it’s no disrespect to a police officer, to a person that served in our armed forces. We have the utmost respect for those guys. They do something that we could never imagine doing.
“Those men and women sacrifice their life for us to have the freedom to use our speech, to use a peaceful protest to try to fix the things that the flag does represent and that it does stand for.”
Trump doubled down on his attack on the NFL on Sunday morning.
“If NFL fans refuse to go to games until players stop disrespecting our Flag & Country, you will see change take place fast. Fire or suspend!” he tweeted. “…NFL attendance and ratings are WAY DOWN. Boring games yes, but many stay away because they love our country. League should back U.S.”

If NFL fans refuse to go to games until players stop disrespecting our Flag & Country, you will see change take place fast. Fire or suspend!

The stands were nearly full for the Browns-Colts game. Taylor said the goal of the Browns is to unify Cleveland. He lamented Trump’s latest attempt to divide.
“We’re letting sports separate America or he’s trying to have sports separate America, and we can’t have that,” Taylor said. “Sports do like LeBron (James) says. Sports bring everybody together, and that’s one thing we can hang our hat on. No matter what your skin color is, sports always brings us together. A bunch of guys on this team, we’re all about unity and prayer.”
Linebacker James Burgess called himself a Trump supporter but fired off a tweet Sunday morning and kneeled during the anthem.
“I wouldn’t say he’s a bad leader,” Burgess said after the game. “Just a bad choice of words, I would say. I was a Trump supporter. It wasn’t a hate tweet. I don’t hate the dude. I was just let down by those words. Those words made me feel uncomfortable when he said it.”