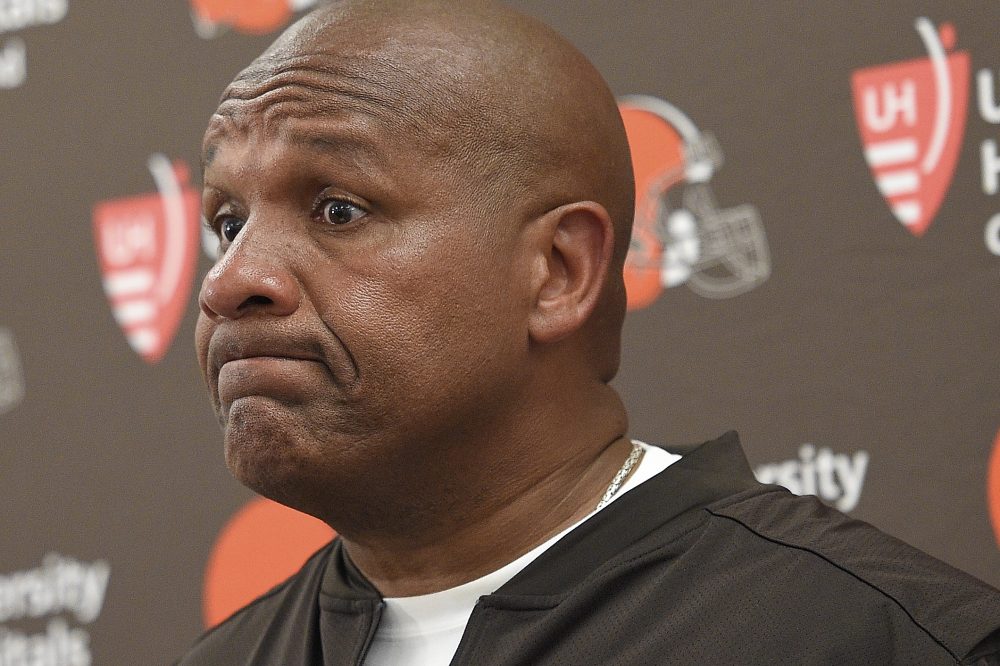 The ragtag receiving corps doesn’t consistently get open, had at least six drops Sunday in a 31-28 loss to the Indianapolis Colts and lacks chemistry with Kizer because the pieces in the lineup keep changing.

The Browns are 0-3 and the only team in the NFL not to lead this season. They’re 1-18 in coach Hue Jackson’s tenure.

Yes, Jackson worries about the psyche of his young team.


“None of us like losing,” he said Monday. “There is a human element we all deal with. But I think this team is very resilient and I think they will keep working. I know they will.

Jackson is the man front and center with the media and on the sideline on Sundays, and the losses will forever be attached to his record. But he didn’t assemble the 53-man roster that’s the youngest in the league and features 33 players with less than two years experience.

That responsibility falls to executive vice president of football operations Sashi Brown, who cut No. 1 cornerback Joe Haden right before the season, didn’t upgrade the receiver position in free agency or the draft and left the team with only three players 30 years old.

With the focus apparently on the future — owner Jimmy Haslam said in training camp not to expect a substantial jump until 2018 or ’19 — Jackson was asked Monday if the team can win now.

“I think this team can,” he said. “I think we have to do some things better and work a little bit harder and make sure that we do some of the detail things right, but that question that you just asked, I think that is something you have to talk to Sashi about and the executive team.”

In the minutes after the loss to the Colts, Jackson said “nothing magical” was going to happen to solve the problems and “no new players” were on their way. He was asked 23 hours later if he hoped Brown would make an impactful trade like the one last year that brought Pro Bowl linebacker Jamie Collins.

“My job is to coach the guys that are here with our football staff, and that is what we are going to do,” Jackson said. “I am sure that our executive team is scouring everywhere looking at who could potentially help our football team.”

Receiver is the position screaming for attention.

Terrelle Pryor left in free agency for less money in Washington. Kenny Britt was signed to replace him but has been a disappointment, even after catching a touchdown Sunday. Knowing depth was an issue, Brown chose to stand pat, leave Britt as the only veteran — despite a rookie quarterback — and hope the second-year receivers made quantum leaps. They haven’t happened.

Corey Coleman, the No. 15 pick in 2016, is on injured reserve with a broken right hand. Rashard Higgins followed up a career day in Baltimore with two catches for 10 yards in 52 snaps Sunday. Ricardo Louis had three drops against the Colts to go with one catch for 10 yards in his first start in place of Coleman.

“We have the group that we have,” Jackson said. “These guys are working hard and are trying to be the best they can be. We are going to keep working with these guys. We are going to get them better.”

Kizer stood by his receivers, especially Louis, who had the worst drop Sunday on a perfectly thrown go route down the left sideline.

“Ricardo’s a great player, and he knows it and I know it and we all know it,” he said. “I think that the most important thing after a game like that is to go into practice with the excitement that we had today to get back to work. We’re going to come out and we’re going to make the proper adjustments that we need to make and go out and make the plays that we need to make to go out and win games.”

Kizer is new to the losing with the Browns and said the team’s psyche remains positive. He pointed to spurts of good play interrupted by critical mistakes.

“You watch the film and you go back and you evaluate where you are, and we’re right where we want to be, we just don’t have the W’s to support it,” he said. “We’re driving the ball down the field. We know that on offense we take away one simple thing, and that’s turnovers, and we’re the offense that we want to be. On defense if we go out and we stop the big playmakers on the other offense, that we’re going to be a great defense.

“Everything is right there. We have the talent, we have the players, we have the mentality, it’s just about going out and making sure that we’re executing from the first snap to the last snap of every game.”

Now would be a good time to start. They host the 0-3 Cincinnati Bengals on Sunday, then the 1-2 New York Jets, then the schedule gets tougher.

“For us, every stretch is crucial,” Jackson said.

“You hope to start stringing together some games that could turn into a turnaround season that goes in the direction we want it to go,” Kizer said.

DeShone Kizer leads comeback try, but teammates let him down with drops, penalties in loss to Colts
CFL won’t approve Manziel deal for this year