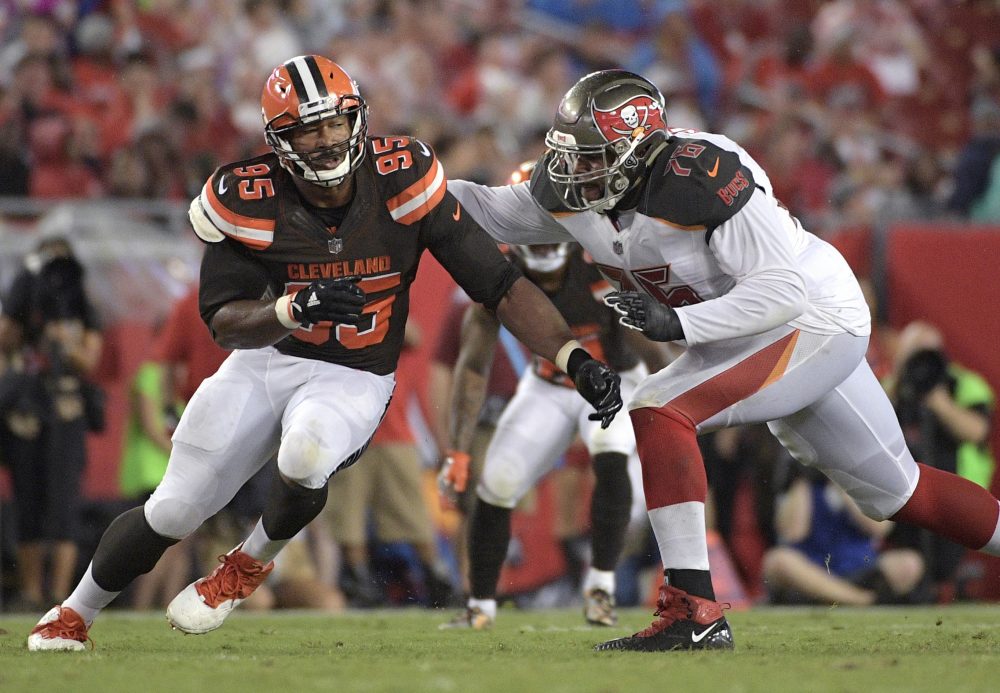 BEREA — No. 1 pick Myles Garrett might leave the sideline for the practice field Thursday or Friday.

Garrett, the rookie defensive end, remained on the stationary bike Wednesday, but coach Hue Jackson said he could return to practice this week and didn’t rule out him making his NFL regular-season debut Sunday against the Cincinnati Bengals.

“He’s close,” Jackson said. “I think there’s a chance he’ll practice this week before the week’s out, so we’ll see where we are after that.”

Garrett went down with a high right ankle sprain Sept. 6, four days before the opener, when a teammate fell into his leg. He got out of the walking boot last week, began running and has been progressing. The timeline for a high ankle sprain is usually 4-to-6 weeks.


Garrett hasn’t played since the third preseason game Aug. 26 and has missed three weeks of practice. But Jackson said a day or two of practice could be enough to put him on the field — at least for some pass rush situations.

“If he is able to play, we might not play him the whole game,” Jackson said. “So we’ll see how that unfolds if he’s able to go. We’ll find out more as we go through the week.”

The Browns could use Garrett’s ability to get to the quarterback off the edge. They have six sacks through three games.

“We have to coach the guys that are healthy, available and out there playing,” Jackson said. “Do we want more pass rush? Yes, anybody would, but we have to take what we have and make the most out of it. Gregg (Williams, coordinator) has done an outstanding job of putting guys in position to try to make plays.

“Now, we have to make those plays. Sometimes we do, and sometimes we don’t, but I think our defense is fighting extremely hard, playing as well as they can.”

“Can’t wait. Can’t wait,” Kizer said. “He is a freak of an athlete and I can’t wait for him to come out and make some plays for us.”

“Yeah, he can’t wait. He has been working his butt off (to get) back out on the field,” he said. “I am excited to see him when that time comes.”

** Outside linebacker Jamie Collins remained in the concussion protocol.

Kizer has been sacked 10 times in three games, taken a number of big hits and drawn four personal fouls on the defense — unintentionally.

Now he will face Bengals linebacker Vontaze Burfict, who returns this week from his latest suspension after his latest illegal hit.

Colts safety Darius Butler was called for unnecessary roughness Sunday when he hit Kizer after a late slide. Colts rookie safety Malik Hooker was penalized for roughing the passer when he went low and Kizer’s knee bent. It looked painful.

“I’m completely OK, completely healthy from it, but once again, that is an opportunity for the officials in our league to continue to protect the quarterback,” he said. “Malik and I are good friends off the field so I know there were no harmful intentions on that.”

Migraines excluded, Kizer said he’s never had to leave a game because of an injury.

Kizer’s a big basketball guy and said he’s been a Cavaliers fan since he was a kid growing up in Toledo. He was thrilled to hear the news Dwyane Wade was signing.

The Cavaliers added Wade, Isaiah Thomas and Derrick Rose to LeBron James in the offseason.

“I can’t imagine it,” Kizer said. “All of these super teams that are happening, I think that right here in Cleveland we have one of the best.”

Kizer said once his season’s over he will attend Cavs games.

“I am looking forward to supporting them,” he said.

“This offense has only been together since OTAs as a group and as a unit, and really all together after the last preseason game,” he said. “We’re young in this offense and we’re still learning. We’re going to be scary in November and December. That’s when the good teams get great, to tell you the truth.”

** Undrafted rookie receiver Bug Howard (6-foot-4, 210 pounds) was signed to the Browns practice squad Tuesday. He went to North Carolina and had been with the Colts.

** Jimmy Buffett’s “Grapefruit-Juicy Fruit” was playing in the locker room when reporters entered.

CFL won’t approve Manziel deal for this year
Jimmy and Dee Haslam, 3 players attend meeting with Commissioner Roger Goodell to discuss what to do during national anthem