Myles Garrett returns to practice, sick of feeling helpless, wants to show what he can do 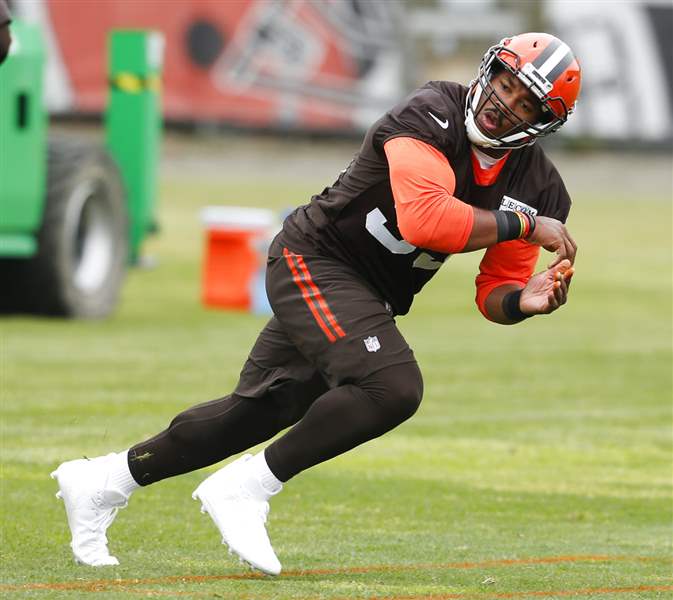 BEREA — The excitement has been building inside Myles Garrett.

So has the frustration.

Garrett, the No. 1 pick, returned to practice Thursday for the first time since suffering a high right ankle sprain Sept. 6. The 6-foot-4 1/2, 272-pound defensive end has missed the first three games of his NFL career, all losses.

“It’s a horrible feeling being on the sideline, having to watch all this occur and not be able to do anything about it,” he said Thursday night. “It’s just a feeling of helplessness that you have that you don’t want to have at anytime in your career. Hopefully when I get back out there I can do something about it.”


Garrett said the decision will be made Friday whether he’ll play Sunday against the Cincinnati Bengals at FirstEnergy Stadium. He said the coaching staff and medical staff will make the call, and he’s doing all he can to get the green light.

“I don’t know if it will really be emotional, it will be a lot of built-up excitement for me just waiting to get on the field and show what I can really do,” he said of a possible debut. “We’ve been skidding in the wrong direction and we could really turn it around with a win here at home and then carry that momentum throughout the rest of the season. I’d just be glad to see the field on Sunday.”

Garrett said after the injury he didn’t want to rush back before he was ready. Coach Hue Jackson reiterated Thursday the organization would consider holding him out Sunday to make sure he’s better positioned to finish the season without a setback.

“He looks to be in good shape, but let’s make sure that we are in football shape and ready to play big-time football,” Jackson said. “I want to make sure that we cross all the t’s and dot all the i’s and talk to the medical staff, because he is a huge piece of our organization and our future. We want to be cautious but smart as we go through it.”

A player usually needs a minimum of four weeks before he can return from a high ankle sprain. Garrett missed exactly three weeks of practice, so would playing Sunday be rushing it?

“It might be, but some people heal faster than others and I just have to see where I am (Friday),” he said. “If I have to spend a little bit more time on the side to make sure I come back and I can be a force on the field, then I’ll do that.”

Garrett said he still has soreness in the ankle but the injury was never as bad as the left high ankle sprain that cost him two games of his final year at Texas A&M and slowed him throughout the rest of the season.

“There’s always going to be soreness throughout the season, but if you spend enough time healing and being in the training room and recovering, then you should keep it to a minimum and it shouldn’t bother you too much,” he said. “It shouldn’t hang around and affect me as much as it did when I was playing at Texas A&M.”

Garrett is fighting a cold and was running a little late for the start of stretching, so he ran the 140 yards to join his teammates at the far end of the practice field. He looked healthy doing it, as his long strides quickly ate up the distance.

“I think he wanted to make a grand appearance,” left guard Joel Bitonio said. “I noticed him out there, I saw him get to the quarterback a couple times on a few rushes. Anytime one of your best players is back out there, it just lifts up practice a little bit.”

“We almost started to throw a little party to see him back out there,” veteran cornerback Jason McCourty said. “We should have had him introduce himself to the defense again.

“Throughout training camp, just seeing what his ability is, you know he is a weapon for us. To see him back out at practice, I think our entire defense and team probably gets excited because we know the talent that he has.”

Garrett was limited in his return. During the 20 minutes open to reporters, he stretched, ran and went through individual drills with the defensive linemen, including firing out of a three-point stance. Jackson said he participated in some team drills.

“There was one time where he came right off the edge, dusted the tackle and it would have been a sack if we were allowed to touch the quarterbacks in practice,” middle linebacker Joe Schobert said. “He looks good.”

Garrett hasn’t played in a game since Aug. 26 in the preseason. He was a three-time All-Southeastern Conference selection and two-time All-American. He totaled 145 tackles, 48.5 tackles for loss, 32.5 sacks and seven forced fumbles and became the first Texas A&M player drafted No. 1.

He would be expected to energize a pass rush that has six sacks in three games, tying for 21st in the NFL.

“I wish I could just go out there and make a difference, because I feel like I can, I can go out there and do things that some other people can’t and hopefully when I get back out there I’ll show that,” Garrett said.

“That would be a jolt to our football team,” Jackson said.

Jimmy and Dee Haslam, 3 players attend meeting with Commissioner Roger Goodell to discuss what to do during national anthem
No. 1 pick Myles Garrett likely to miss 4th straight game Sunday against Bengals