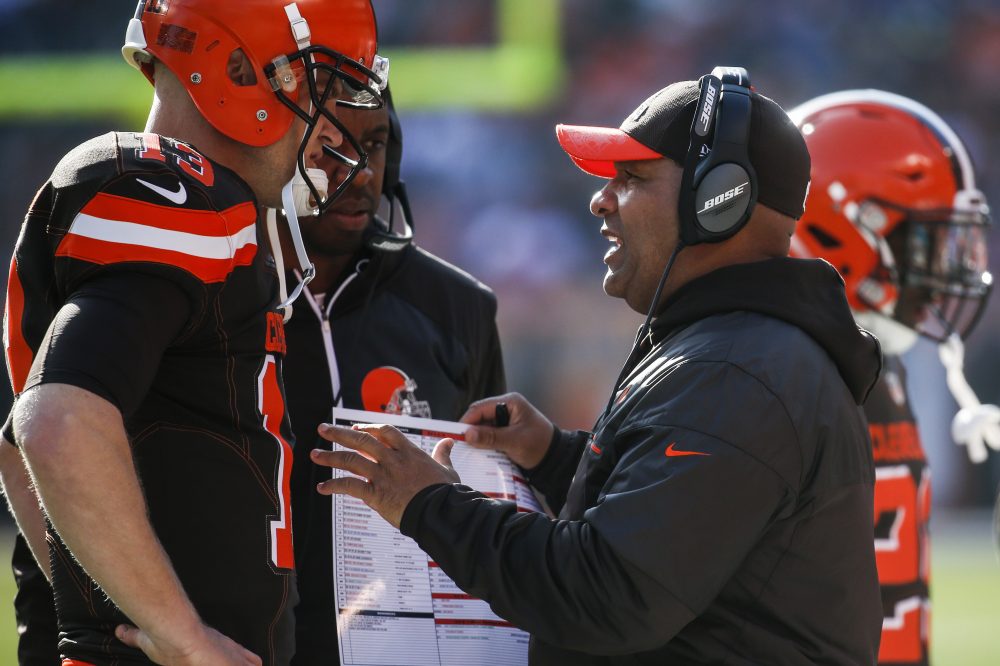 Josh McCown was inside Browns headquarters for the demolition. He said the rebuild needs at least three years before it can be judged accurately.

“It’s hard to say anything other than three years before you can really even start to begin to evaluate where you’re at,” McCown, the 38-year-old starting quarterback for the Jets, said Tuesday on a conference call. “You want to start seeing improvement in Year 3 and want to start to see kind of those players that you projected to be good players start to show up and do those things.”

McCown was the starter for the Browns for eight games in 2015, the last year for general manager Ray Farmer and coach Mike Pettine. McCown then saw owners Jimmy and Dee Haslam turn over the football operations to Sashi Brown, who teamed with chief strategy officer Paul DePodesta on a radical plan to fix the perpetually pitiful organization with a complete teardown and an intense focus on analytics.

Coach Hue Jackson was hired to oversee the construction project and has gone 1-19, including an 0-4 start this season. McCown said no matter the record, Jackson should get a third season on the job.


“You have to attach an appropriate time and an appropriate expectation,” he said. “That’s what’s going to give you the steadfastness to wait it out. But if you don’t understand that and if you think all the sudden it’s Week 9 of Year 2, we should snap our fingers and see big improvement, that’s the wrong mindset and you’re going to be disappointed. And then this process is going to be inevitable. You’re going to keep rolling over and keep rolling over.”

McCown has spent his long career on bad teams and is an expert on rebuilds. His last three stops have come with the Buccaneers, Browns and Jets. The Bucs and Browns each had the No. 1 pick after his tenure, and the Jets could still be headed there.

He stressed the importance of remaining resolute to the long-term nature of the rebuild, especially when it comes to judging Jackson. He said the vision for the plan doesn’t always meet reality, which includes painful losses.

“When you set out to do this thing and rebuild the way that you did, you have to have some steadfastness,” McCown said. “If you’re sitting there continually saying you need to add pieces and you have picks and you’re going to add talent, then if there’s a necessity to add talent, then I don’t know how you evaluate the coach fairly. That statement in and of itself is a little indicting.

“It seems like there is some patience there with everyone and hopefully they’ll stick to that and really give the system and the things that they’re putting in place a chance to take root.”

McCown said it’s also impossible to fairly evaluate a player if the offensive or defensive system is constantly changing. He said a key reason the rebuilding Jets, who jettisoned many of their veterans, are surprisingly 2-2 is because coach Todd Bowles is in his third year running the same defensive system.

“The veterans that are still here, it’s their familiarity with the system,” McCown said. “It’s really hard when you’re starting on both sides of the ball brand new and learning a new system. And so I think it just puts you that much further behind the pace of other teams that have been together.”

The Browns gutted their roster of experience, keeping only three players 30 years or older — left tackle Joe Thomas, cornerback Jason McCourty and punter Britton Colquitt. If that weren’t enough, in Year 2 of the rebuild the front office has given Jackson the youngest roster in the league, including 33 players with less than two years of experience.

McCown is one of only three Jets over 30, but they have several more players than the Browns do in their middle and late 20s. He said a team can be too young.

“Oh, no doubt,” McCown said. “That certainly makes it tough. Because where are you going to find your guys in the locker room? Joe Thomas can only do so much.

“When you have a good mix of veterans in there, they can lighten that burden for coaches, trainers, strength coaches, whatever. They can help carry that load to make sure guys are doing the right thing. There’s something to be said for player-to-player accountability that’s so huge.”

Profootballtalk reported suspended Browns receiver Josh Gordon has yet to apply for reinstatement. His latest application was denied in May and he was told he could try again in the fall.

** Linebacker Deon King was promoted from the practice squad to replace linebacker Dominique Alexander, who was placed on injured reserve with a knee injury.

King (6-foot, 220 pounds) is in his second year in the league. He spent the preseason with the Browns.

** The Browns signed receiver Bryce Treggs (6-0, 185) off the Eagles’ practice squad, the Philadelphia Daily News reported. The move wasn’t official Tuesday night and the Browns hadn’t made a move to clear a roster spot.

Treggs is in his second year. He played in nine games last year with one start and had three catches for 80 yards.

Hall had seven catches for 103 yards and a touchdown with the Browns during the preseason.