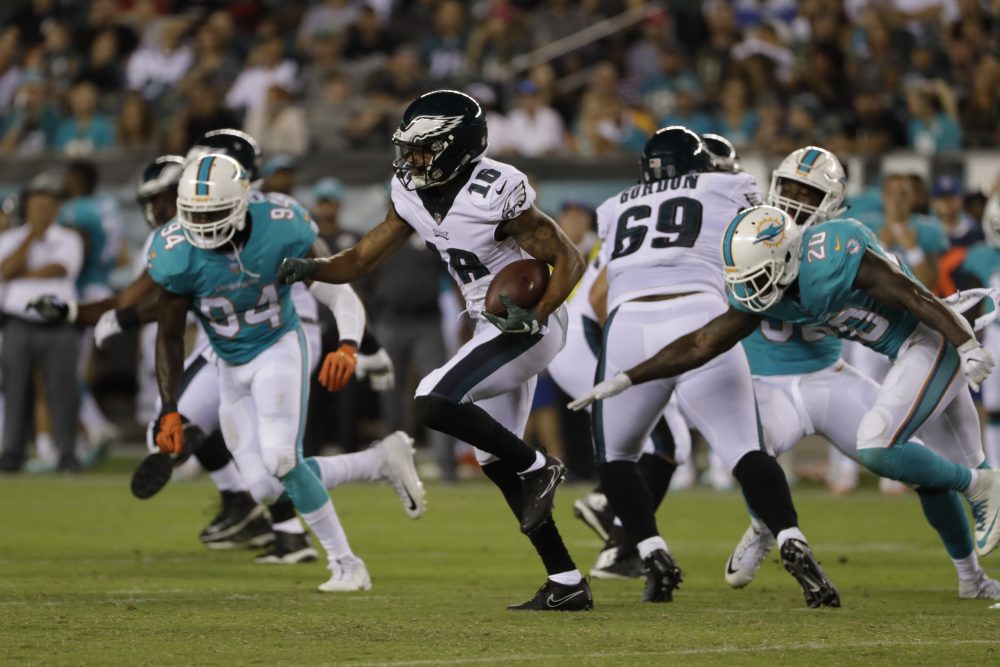 BEREA — Receiver Bryce Treggs could’ve stayed in Philadelphia for the same money. Instead, he hopped on a plane, arrived in Cleveland at 11 o’clock Tuesday night and practiced Wednesday afternoon.

“I wanted to get on the field,” he said.

Treggs (6-foot, 185 pounds) was on the Eagles’ practice squad after they cut him following 12 catches for a team-high 141 yards in the preseason. The Browns offered to sign him to the active roster for the league minimum, and Treggs said the Eagles countered by matching the salary but not the promotion.

“They weren’t going to get me on the field,” he said.


The Browns certainly offer the chance to contribute. Their receiving corps is arguably the worst in the league, and coach Hue Jackson is looking for anyone to step up.

“I’m excited and very blessed for the opportunity, and I’m excited to be in Cleveland,” Treggs said.

He took the roster spot of receiver Jordan Leslie, who was waived with an injury designation after hurting his hamstring in the 31-7 loss to the Bengals.

Jackson called Treggs in Philadelphia to persuade him to sign, and it worked. Jackson met and watched Treggs at California’s 2016 pro day when he was scouting quarterback Jared Goff.

Jackson unsuccessfully recruited Tregg’s dad, Brian, out of high school. He briefly played in the NFL.

“He just said, ‘Everything that I’ve seen on tape, we’re going to put that to use. We’re going to give you a chance to make plays for us,’” Treggs said of the call this week. “That’s all I wanted as a football player.”

Treggs was undrafted out of Cal and appeared in nine games with the Eagles last year, catching three passes for 80 yards. He ranked third in Cal history with 195 catches and fourth with 2,506 receiving yards.

“I’m a speed guy,” he said. “I run a 4.3, so I can definitely take the top off, but I’m not limited to that. I can run underneath routes, shallow crosses, daggers. I can run the whole route tree.”

“He has top-end speed. He has suddenness. He has quickness,” Jackson said. “I have always known that about him. I really like him.”

An opportunity could quickly present itself for Treggs.

Kenny Britt (knee/groin) didn’t practice Wednesday, and Jackson didn’t sound optimistic he’d be able to play Sunday against the New York Jets. Jackson said Monday that Britt might be able to use a “breather” after a terrible start to his Cleveland career.

Sammie Coates (hamstring) returned to practice after missing two games but doesn’t have a catch.

Treggs got a taste of NFL Sundays last year and can’t wait for more.

“It’s just a built-up hunger. Just a built-up anxiety, excitement,” he said. “There’s a ton of words to describe it, but I’m just ready to get out there and play on Sunday.”

No. 1 pick Myles Garrett does things his own way. A few minutes before practice, he tweeted he was back. In Spanish.

The hope and plan is that Garrett will make his debut Sunday after missing four games with a high right ankle sprain. He returned to practice last week but wasn’t ready to play in a game.

“He did some better things today,” Jackson said. “We will just keep assessing everything after practice and see exactly where he is and see if we can get him back out there tomorrow.”

Cornerback Jason McCourty has lived through worse than Cleveland’s 0-4 start and come out the other side. When he was a rookie in 2009, the Titans started 0-6 and the sixth loss was 59-0 to the Patriots in the snow.

“Oh, we won eight out of the last 10 games so just keep playing football,” he said.

McCourty is in his first year with the Browns, so he missed the 14 straight losses to open last season. He said it’s not a challenge for players to stay focused during a skid.

“If you go out there and you play like you don’t care or you stop studying, you are not going to be here. You are not going to be in the NFL, period,” he said. “I don’t think there is ever a lack of motivation from guys. You play this game to win it, but you also play this game because you love it. You play it because you have been battling with your guys next to you since April 17 and you still want to go out and play hard for that guy.

“We are not where we want to be after the first quarter of the season, but we have three more quarters to go. It is up to us to dictate how those quarters end up.”

Rookie free safety Jabrill Peppers said the takeaway from the blowout loss to the Bengals was simple.

“We got our (butt) kicked,” he said. “Besides that, we have to play better, especially at home. You can’t let any team, another man, come in your house and have his way with you, so that is our biggest takeaway.”

“They are awesome. The camaraderie that they have within that locker room, which is a little different from what we have here, is amazing,” Kizer said. “They find a way of resetting themselves each game to step back out there and have success. I am looking forward to being in Cleveland as they go on another great run.”

“There is not much time to sit down and watch a 17-hour baseball game,” he said. “We can sum it up in a quick Twitter stream.”