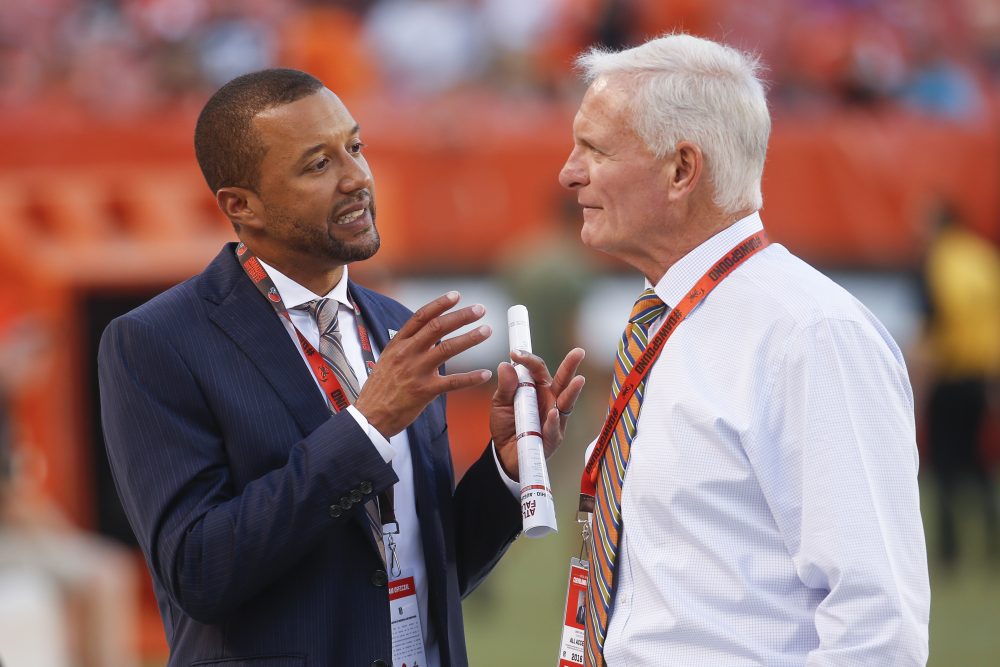 BEREA — In the 0-4 start to the season, Sashi Brown finds progress.

In the 1-19 start to his tenure as executive vice president of football operations, he sees a plan coming together.

A 31-7 home loss to the Cincinnati Bengals on Sunday further infuriated a frustrated fan base and raised the volume of the pointed questions about the direction of the organization.

But Brown isn’t wavering or panicking. He remains undeterred and committed to his vision.


“Growth and development of a roster is not going to happen overnight,” he said Wednesday. “You’ve seen more than one team try that unsuccessfully. We’re committed. As I told you from Day 1, we’re not going to stray just because we have some challenges early on or face some adversity early on.

“We’re seeing the young guys get on the field and play. So in our progression, we’re going to stick to our plan and stay developing our young guys.”

Brown put the unique plan in place after being promoted in January 2016. He chose a complete overhaul that included tearing down the roster in order to build it back up.

He allowed key veterans to leave in free agency and cut others. He stockpiled draft picks with an eye on the future but acknowledges the pain of the present.

“We’re really disappointed for our fans, disappointed for our organization and where we are, but we will get righted,” he said in his first meeting with reporters since the season began. “We’re committed to continuing to work toward building this roster and becoming a perennial playoff team, and we’re on the way toward that.”

The 0-4 start suggests otherwise. It’s featured three progressively worse performances after an encouraging 21-18 loss to Pittsburgh in the opener.

“We’re not going to overreact to four games,” Brown said. “We played some tough divisional opponents. But we know we can play better and will.”

“We understood this is going to be a challenging build,” Brown said. “We’re not satisfied by any stretch, but both Hue and I are really realistic about where we were, where we are and where we’re going and committed to that good, open communication throughout. So no different than what we’ve had from Day 1.”

Following a franchise-worst 1-15 season, Brown constructed the 2017 roster as the youngest in the league. Only three players are 30 years old, and 33 of the 53 are in their first or second year.

Owner Jimmy Haslam watched practice Wednesday from the field, keeping a close eye on the tight ends during the early drills. Brown said Haslam’s on board as the rebuild creeps along.

“We all want this to happen as soon as possible. But we also are very conscientious about making sure we’re paying attention to some of the underlying signs,” Brown said. “I’m not going to get into all the discussions and details that we had, but Jimmy was realistic when we started in 2016 about where we are, too.”

The 0-4 start looks worse when compared to other teams expected to be at the bottom of the standings. The Jets, this week’s opponent, are 2-2 with Browns castoff Josh McCown at quarterback. The Rams and Bills are 3-1 with new coaches.

Brown said the Browns are equipped to win now, and the goal is to do it while continuing the development of a roster that he said isn’t too young.

“We’re not at the end of our build by any stretch and I don’t know if any team ever is,” he said. “But we certainly have made some progress on the field, we’re seeing that with some of the young guys that are playing and making plays for us. But winning is why we’re here. So the results need to get better. We can and will play better as we move forward.”

Brown could be a politician with the way he’s stayed on message for nearly two years. He’s sticking to his guns that the organization will stick to its plan.

And he wouldn’t even admit regret in assembling a receiving corps that has failed rookie quarterback DeShone Kizer. Brown drafted four receivers in 2016, none of whom has solidified himself as a consistent contributor, then ignored the position in the latest draft despite having 10 picks. He allowed Terrelle Pryor to leave in free agency and replaced him with Kenny Britt, who’s been a bust.

“There’s always opportunities you wish that you capitalize on that you don’t or that you didn’t,” Brown said. “At the same time, our wide receivers can play better and I think they will. We’re not going to overreact too much early. I think you’ve seen some guys have some performances that raised some eyebrows in a positive direction.”

On multiple occasions Brown pointed to injuries to receiver Corey Coleman, No. 1 pick Myles Garrett and linebacker Jamie Collins as hurting the chances for victory. He admitted the roster depth isn’t where it needs to be.

“You’re going to lose players like that. Every team would miss them, but particularly on our roster, where we are so young and still developing, those guys are really missed.”