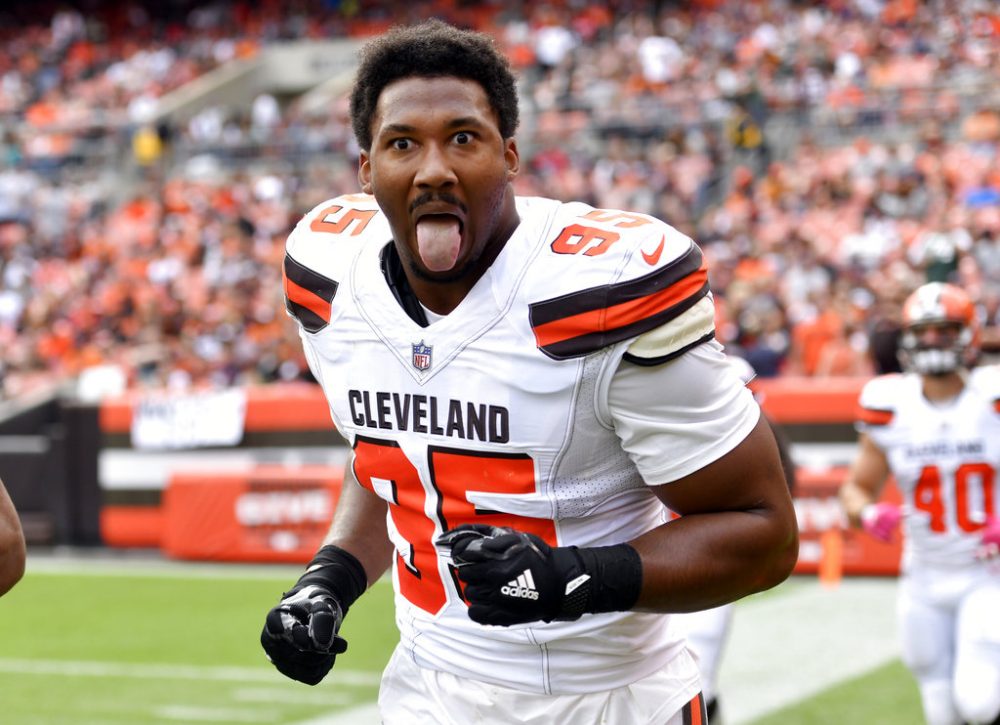 The Myles Garrett Era began Sunday, while The Browns Are A Mess Era continued.

Enjoy the former, abhor the latter. Because it’s getting worse.

To say the season is unraveling is not fair. Because the season was never raveled.

This isn’t football, this is nonsense.


Not even the debut of Garrett, the neatly chiseled quarterback stalker, puts any window dressing on the bizarre ball the Browns are, and are not playing.

Three weeks ago, they were 0-2 and facing a three-game segment of their schedule in which they played three consecutive winless teams — the Ravens, Bengals and Jets — two of the three at home.

The Browns lost all three by a combined score of 79-49. And that was supposed to be the “easy” portion of the schedule.

On Sunday they had three trips into the red zone, and came away with zero points. They also missed two field goals. So, to review, in those five possessions, with a potential for a maximum of 27 points, they scored none — and lost by three points.

The Browns also benched rookie quarterback DeShone Kizer at halftime, and all of a sudden Mitch Trubisky’s first NFL start for the Bears on Monday Night Football gets even more interesting.

Meanwhile Browns coach Hue Jackson is bailing water as fast as he can. The Browns are 0-5 this year and 1-20 since he became the head coach. The Browns’ three-game whiff in the cream-puff portion of their schedule only makes Jackson’s hot seat hotter, which might explain the mid-game benching of Kizer.

“We weren’t functioning as well as we can. It just wasn’t working,” said Jackson of the Browns offensive coughing and wheezing under Kizer.

Head coaches and quarterbacks are frequently joined at the hip. When one underachieves, it can drag down both. Sensing the potential of him becoming a dragee, Jackson switched to Kevin Hogan to start the second half.

Nothing screams dysfunction or desperation more than when a coach switches quarterbacks at halftime. Especially after last week, when Bengals’ quarterback Andy Dalton had a quarterback rating over 100 points higher than the struggling Browns rookie — which is almost impossible in a single NFL game.

The next day, however, Jackson said Kizer played “lights out.”

That, apparently, means Kizer’s play Sunday against the Jets was lights on, because Jackson pulled Kizer off the field at halftime.

“We’ve had way too many turnovers in the scoring zone this season,” Jackson said. “Four or five more TDs we should have had, but then the other team suddenly has the ball.”

Jackson refused to name his starting quarterback for next week, but with the toothpaste now out of the tube, good luck trying to put it back in. The Browns are heading down still another familiar, and nightmarish road.

“It’s frustrating for sure,” Kizer said. “My job is to help us win games, but it’s tough to do when you’re not in the game because of poor performance.”

Late in the first quarter, with the game scoreless and the Browns in a third-and-goal from the Jets’ 3-yard line, Kizer audibled into a quarterback option. But his flip to Isaiah Crowell was fumbled by Crowell. The Jets recovered, and that was that.

“I had no problem with him changing the play, because we practiced that option, but the timing between him and Crowell was not good,” Jackson said.

“I pitched it to him, and he didn’t catch it,” Kizer said.

Rookie kicker Zane Gonzalez missed two field goal attempts, from 52 and 39 yards, costing the Browns six points in what was a three-point loss.

Jackson said those two misses didn’t influence his decision to not kick a field goal on a fourth-and-2 situation at the Jets’ 4-yard line, with the Browns trailing 10-7 in the fourth quarter. Instead the Browns tried to get the first down on a run by Crowell, which didn’t work.

The Jets took possession and roared down the field, going 97 yards on eight plays for a put-away touchdown.

“I went for it,” Jackson said, “because even if we don’t make it, they would have to go 97 yards to score.”

The Jets did exactly that.

So, the Browns are five games into the season, almost one-third of the way to another 1-15 season, or worse, with uncertainty again surrounding the quarterback position, a head coach starting to coach like he’s aware that ownership’s patience isn’t limitless, and a schedule that has no more winless opponents in their immediate future.