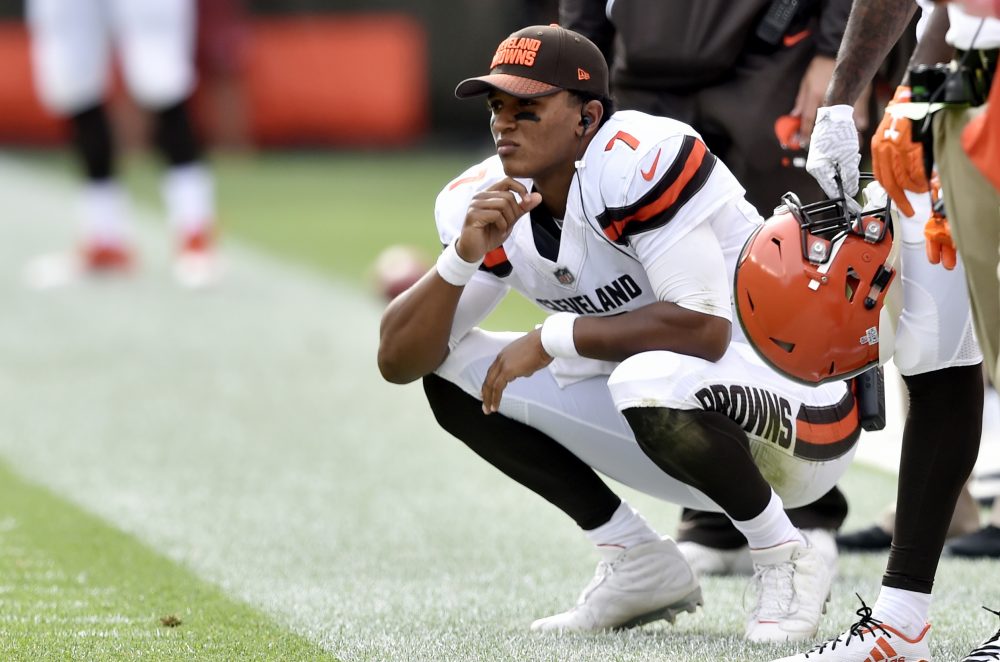 BEREA — Coach Hue Jackson wanted more time to make the decision. He planned to watch the film again, sit by himself and come to a conclusion.

He sure sounded as if he’s leaning heavily toward going with Kevin Hogan over rookie DeShone Kizer to start at quarterback Sunday against the Houston Texans.

“If that is the decision that we make, then I think it will benefit (Kizer) tremendously because he would get a chance to get a breather and take a look at it from a different lens and not from that pressure,” Jackson said Monday.


Hogan went 16-for-19 for 194 yards, two touchdowns, an interception and a 122.4 rating against the Jets. He led the offense to both touchdowns.

Hogan has played in seven games in two seasons, all off the bench. He would be the 28th quarterback to start a game for the Browns since they returned in 1999.

Kizer’s 0-5 record and dreadful statistics would be used to justify the decision to go with Hogan. At the same time, the Browns are in Year 2 of an extreme rebuild and the focus remains on the future and developing the young players.

“Sometimes you can feel, I’m sure, as a coach, feel like you’re kind of stuck between a rock and a hard place,” left tackle Joe Thomas said. “It can feel difficult, I’m sure.”

Jackson is 1-20 in his two years with the Browns and feeling the pressure of being in charge for the worst stretch in franchise history.

“Hell, my confidence is shaken,” he said when asked if Kizer’s confidence could be compromised. “We haven’t won a game. I am 1-and-whatever you guys want to say — what 1-30? I don’t know what it is.

“My confidence is shaken, too, but I am going to walk in here every day and in this building every day with the mindset to get better and to get this organization and this football team to winning. DeShone has to do the same thing.”

Jackson said his decision would be based on what’s best for the team and Kizer. Winning is his top priority.

“It is about winning and development,” Jackson said. “It is both, but winning is first because that is what we do this for. We don’t do this for any other reason. We will see where this all goes. I haven’t made that decision yet.”

Jackson is most upset about Kizer’s 11 turnovers, including five in the red zone, with two inside the 5-yard line Sunday. Jackson said Kizer, 21, has struggled to see the field properly in the red zone, where everything is compressed and decisions have to be made in a hurry.

“Let’s just be honest, that is where these things have reared their ugly head,” Jackson said of the turnovers. “It has been for several games, so obviously we are not seeing it as well as we need to.”

But Jackson stood behind earlier comments that Kizer gives the organization hope and has the tools to become a franchise quarterback.

“I still believe that. That hasn’t changed. I am not backing off of that,” Jackson said.

The decision to bench Kizer seemed to go against Jackson’s comments in the preseason when he named Kizer the starter. He said there would be highs and lows and he would stay with the rookie through them.

“Absolutely, ride through the ups and downs until I determine that the ups and downs are too much,” Jackson said. “I have been riding through it. But at some point in time I have to look at it and say, what is best for the football team? That is what I plan on doing.

“DeShone in my opinion is going to be a tremendous football player in this league. He has to continue to work at it each and every day. He is like most young quarterbacks that start into this. It goes well, then there is a little nosedive, then there is a pickup and then there is a flatten-out period. He is going to go through all of that until he has gone through it. He is the youngest quarterback in the National Football League.”

Jackson also backtracked from his comments last week that Kizer played “lights out” in a 31-7 loss to the Bengals, saying he only meant Kizer’s decision-making. But Jackson disagreed with those who argue Kizer has regressed.

“I see a young man who is going through the process of trying to become a good quarterback in this league with a young football team,” Jackson said. “He is trying to help carry it, and that is tough. That is just part of it.”

Hogan, a fifth-round pick of the Chiefs in 2016, was the No. 4 quarterback throughout the offseason and preseason. Brock Osweiler was cut before the season, and Jackson moved Hogan ahead of Cody Kessler on the dept chart.

“It seemed like he did a good job of surveying the field and getting the ball to the man that was supposed to have the ball,” Thomas said. “For a guy to have to step in there in the middle of the game, I thought he did a really nice job.”

Despite the mounting losses, tough decisions and turmoil, Jackson said he and the team remain undaunted.

“As I told them, I came here for one reason and that is to get it turned. When is it going to turn? I don’t have the answer for that, but that is what I am here for and that is not going to change. I am committed to fixing this.”