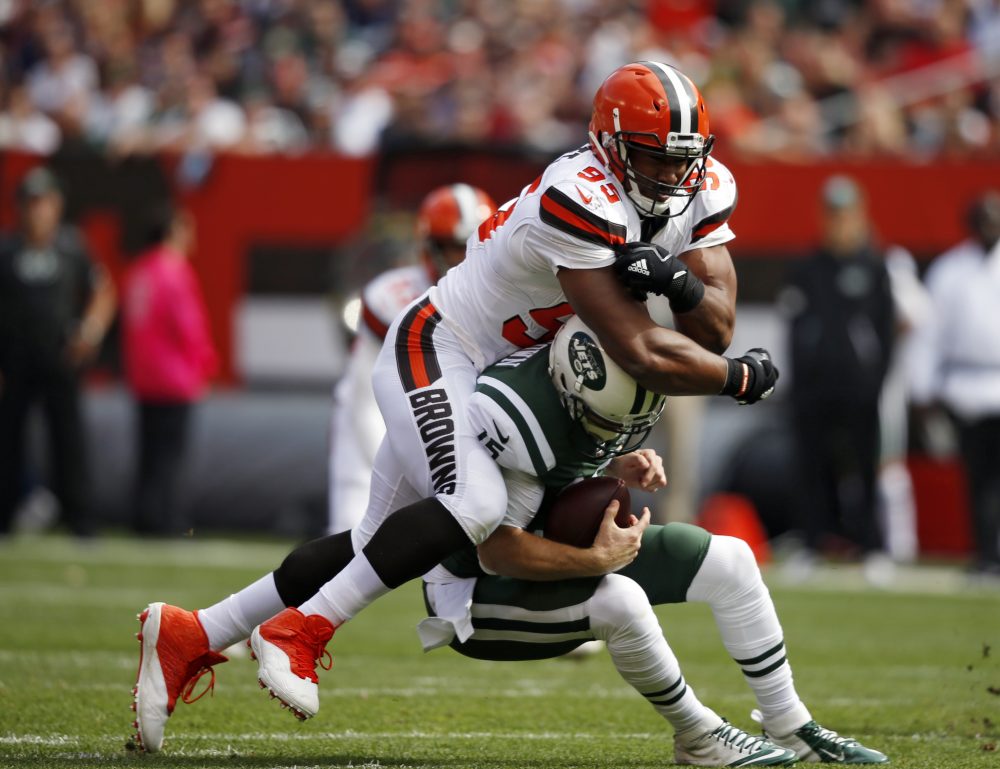 BEREA — No. 1 pick Myles Garrett was “a little bit sore” after playing 19 snaps in his first regular-season game, but coach Hue Jackson said the rookie defensive end will get more playing time as the season progresses.

Garrett had two sacks Sunday in a 17-14 loss to the New York Jets, including one on his first play. He missed the first four games with a high right ankle sprain, and it appeared to bother him as the game progressed.

“A little bit sore, but it will die down,” he said after the game.


Jackson said Garrett woke up Monday a little sore but should be able to assume a greater workload as the recovery continues.

“It was great to have him out there,” Jackson said. “What a tremendous play on the first play and the other sack he made. He gave us some juice and gave us a lift.

“We have to continue to get him to that next level where he can play longer.”

Left tackle Joe Thomas said opponents will have to account for a player as “disruptive” as Garrett.

“He’s a difference-maker and he makes your defense a different type of animal,” Thomas said. “So having him back there is a really big boost for the defense.”

The Browns should get a second boost this week with the return of outside linebacker Jamie Collins. He’s out of concussion protocol and will practice this week, Jackson said. He’s missed three games.

One of several turning points in the loss was when Isaiah Crowell was stopped on a fourth-and-2 rush from the Jets 4-yard line. Jackson initially sent out the kicking team for a 22-yard field goal that would’ve tied the game at 10 with 13 minutes left but called timeout and went with the offense.

“When you don’t get it, that’s always going to be the bottom line is we’ve got to do a better job of knocking them off the ball and getting the yardage that we need to get,” Thomas said. “I was OK with the decision to go for it.”

Jackson said he consults with football research analyst Dave Giuliani before and during games about such decisions. He provides analytical data for specific situations, including win percentage based on decisions and outcomes.

“It is a huge help,” Jackson said.

Rookie Zane Gonzalez missed 52- and 39-yard field goals wide left against the Jets. He missed wide left from 48 yards the week before against the Bengals, so he’s missed three straight.

Jackson was asked if Gonzalez will be replaced.

“We are going to look at everything and see where it is, but Gonzo knows he has to make those kicks,” Jackson said. “There is no question about that. He has an accountability to his teammates. We stick him out there and we think he can make them, so he needs to go make them.”

Gonzalez, a seventh-round pick, made the team ahead of incumbent Cody Parkey after the preseason. For the season, Gonzalez is 2-for-5 on field goals and 9-for-9 on 33-yard extra points.

The Browns stuck with Parkey last year after he missed three of six field goals in his debut against Miami.

SYMPATHY FOR THE PAIN

Houston Texans star defensive lineman J.J. Watt fractured the tibial plateau in his left leg Sunday night, had surgery Monday and is out for the season. The Browns won’t have to face him on the field Sunday in Houston, but Thomas said he felt awful for Watt.

“It was really frightening obviously to see a player in as much pain as he was in and as much distress and the way they took him right to the hospital,” he said. “I can’t remember a lot of times outside of head and neck injuries where you see a guy getting taken right to the hospital.

“So obviously I was watching last night and I was very, very scared. Really my heart went out to him and his family for having to deal with something like that. The fear of the unknown at that moment is really scary.”

Linebacker James Burgess, who replaced Collins in the starting lineup, injured a knee Sunday and his status is uncertain.

** Offensive lineman Andrew Wyle (6-foot-5, 310 pounds) was signed to the practice squad. He’s an undrafted rookie out of Eastern Michigan.

** Offensive lineman Travis Averill was released from the practice squad.