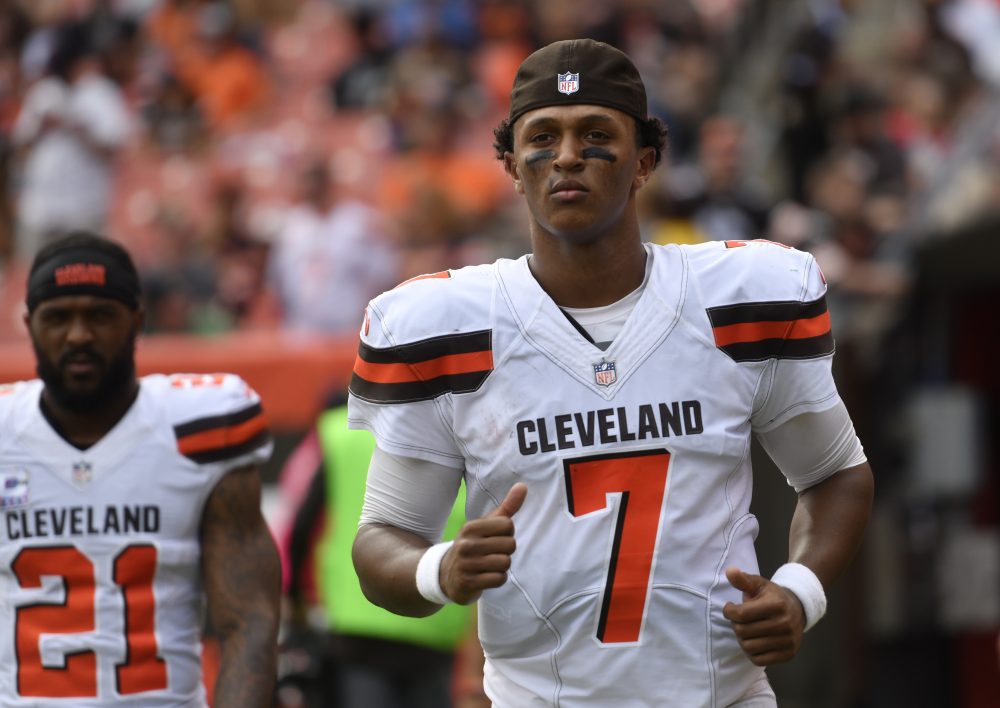 BEREA — First, he was benched at halftime of a three-point game. Then he was demoted to backup behind a guy who’s never started in the NFL.

But don’t expect rookie quarterback DeShone Kizer to curl up in a ball in the corner.

He said Wednesday he’s been playing better despite an 0-5 start and league-worst statistics. He understood but didn’t like coach Hue Jackson’s decision to go with Kevin Hogan as the starter for Sunday’s game in Houston. He remains confident he’ll be a franchise quarterback.

“Now it’s just going to take a little longer before I get back out there, which just gives me more opportunity to become the best quarterback in this league,” Kizer said.

He handled the news well, saying he will learn from the time on the sideline and hustling through practice drills despite following Hogan in the rotation. He’ll be the backup vs. the Texans, with Cody Kessler remaining the No. 3.

“I don’t play this game to sit on the bench,” Kizer said. “So now it’s about accepting this as a challenge and doing whatever I can to get back out there and once again be the best quarterback and the best version of myself I can be when I do get back out there.”

Jackson said the move is temporary and doesn’t reflect Kizer’s talent or potential.

“I will say it again, DeShone Kizer has a huge future here with the Cleveland Browns,” he said. “He needs to continue to grow and continue to get better. There is no question in my mind that he will, but right now, I think this is what is best for our football team.”

Kizer is 6-foot-4, 233 pounds, has a strong right arm and can run. He’s struggled with reading the field and throwing with accuracy.

“The young man is very talented, very young. We all see that,” Jackson said. “But what we don’t see is playing the game at a high level.

“It is my job when I look at something and see that it is not working is to make sure that I am able to help and assist. I don’t think that this is the best version of DeShone.”

He has 11 turnovers, including five in the red zone, with two inside the 5-yard line Sunday against the Jets. He’s last in the league in completion percentage (50.9), interceptions (nine) and rating (49.5).

Kizer is the youngest quarterback in the league at 21. He started only 23 games at Notre Dame and left with two years of eligibility remaining. He took over a team that went 1-15 last season. The receiving corps has changed constantly and is arguably the worst in the league.

He was asked if having so much to overcome at such a young age made the demotion easier.

“Nothing makes this easier,” Kizer said. “I’m a competitor. I want to be out there playing. When I got drafted here, my ultimate goal was to be the starting quarterback for every opportunity that I could and I came a little short of that this week and I’m going to do whatever I can to get right back on the path that I was on.”

When Kizer, the No. 52 pick, was awarded the starting job during the preseason, he said he hoped to put a stop to the franchise’s infamous quarterback list. He hit pause for five games.

Hogan will become the Browns’ 28th starting quarterback since the team returned in 1999. Jackson is looking for the guy that gives him the best chance to improve his 1-20 record with Cleveland and run the offense the way he knows it can work.

“It was the best chance to give our offense a chance to stay in rhythm and play consistently over four quarters,” Jackson said. “Obviously, Kevin has done that in games. We have moved the ball. I just want to see if I can see him do that for a whole game.”

Jackson didn’t name Hogan the starter beyond this week and said he expects to see Kizer start again this season.

“Oh, I sure would hope so,” Jackson said. “I knew that this potentially could happen. It is not just about one guy. It is about the team. I have to do what I think is best to give our team the best opportunity to win. Nothing more, nothing less.”

Jackson is adamant time on the sideline will help Kizer’s performance once he returns to the pocket.

“Now he will see the game through a different lens,” Jackson said. “You start understanding more and more all of the lessons learned from training camp, through the preseason, through the regular season, through the games he played. Those things start to really sink in and make more sense to you. When you are playing and you are under that duress all the time, you don’t get to really step back, exhale and say, ‘Whoa, here it is.’

“There is no question he wants to be out there with his teammates, but he understands he needs to get better over the next several weeks to have a chance to do that.”

Kizer said he doesn’t feel abandoned by Jackson, who had said he’d ride with the highs and lows from Kizer.

“I completely trust in the process that he has set up for me,” Kizer said. “He’s completely riding with me still. He’s just going to ride with me from a new angle.”

Kizer believed he was already making progress. He said he was “much better” before being benched against the Jets than he had been the game before.

“I’m still learning, I’m still growing and I felt as if I was still on the upward trend before this decision was made,” he said.

Left guard Joel Bitonio said Jackson’s in a tough spot as he tries to balance winning now vs. building for the future inside an extensive rebuilding project started by the front office.

“As a head coach in the NFL you know your life span’s not too long if you don’t win games,” Bitonio said. “And he’s been stressing since Day 1 that he wants to win, so I think his decision-making goes into who he thinks is gonna help us win the most games.”