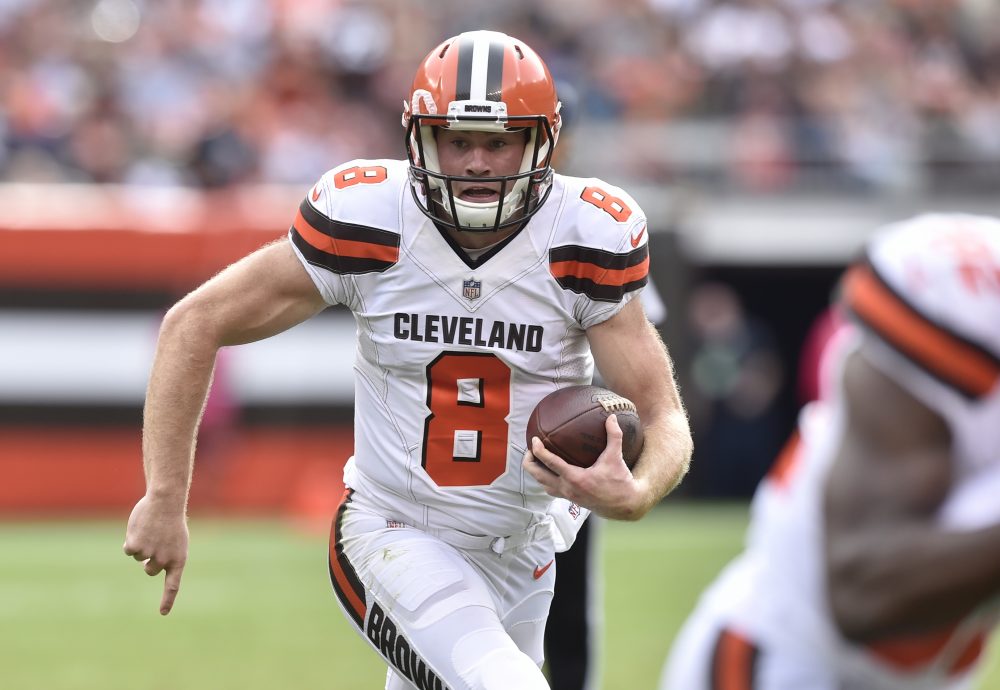 DeShone vs. Deshaun won’t happen this week in Houston.

Browns coach Hue Jackson announced Wednesday morning that Kevin Hogan will be the starting quarterback for Sunday’s game against the Texans and rookie quarterback Deshaun Watson.

Hogan takes over for rookie DeShone Kizer, who started the first five games, all losses, and was benched at halftime in a 17-14 loss to the New York Jets.

Hogan, in his second year, will start for the first time and become the Browns’ 28th starting quarterback since their return in 1999.

“I’ve made the decision to start Kevin this week,” Jackson said in a statement released Wednesday morning. “We’ve liked what Kevin has been able to do within our offense when he’s been in there and he will ‪start on Sunday because that’s what we feel is best for our team at this point in time.

“This does not change the way we feel about DeShone going forward. He has worked extremely hard and still very much has a bright future. Right now, it’s better for him and his development to back up Kevin.”

Jackson became increasingly frustrated with Kizer’s turnovers, especially in the red zone, and turned to Hogan in hope of a spark and a better chance to win. Jackson hopes some time on the sideline will allow Kizer, the No. 52 pick out of Notre Dame, to regroup and hopefully learn from watching.

Kizer has 11 turnovers, including five in the red zone, with two inside the 5-yard line against the Jets. He’s last in the league in completion percentage (50.9), interceptions (nine) and rating (49.5).

Hogan went 16-for-19 for 194 yards, two touchdowns, an interception and a 122.4 rating against the Jets. He led the offense to both touchdowns.

“Hogan is a very smart guy, a very timely passer,” Texans coach Bill O’Brien said Tuesday in a conference call. “He throws the ball on time and has a very good knowledge of their offense.”

“He is a very cerebral young man,” Jackson said Monday. “He gets it and works at it every day extremely hard.”

Hogan, a fifth-round pick of the Kansas City Chiefs in 2016, opened the preseason fourth on the depth chart but was picked as the backup in Week 1 and has climbed the final step.

“He just keeps getting better and better and better and keeps showing that even though maybe he wasn’t a high draft pick that when he gets the opportunity he makes the most of it,” left tackle Joe Thomas said Monday. “He throws the ball to the right guy, on time, on target. He does a good job with getting us on the right protections on the right guys in the pass game. He gets out of bad runs when they have a bad look on defense for us. So I think the confidence of the coaching staff just keeps growing when he’s out there and that’s why I think he just keeps moving up. Has done a really good job when he’s out there.”

Jackson, who’s 1-20 with the Browns, reiterated Wednesday he hasn’t lost faith in Kizer. He said Monday a break could benefit the rookie “tremendously.”

“Because he would get a chance to get a breather and take a look at it from a different lens and not from that pressure,” Jackson said. “The pressure of playing quarterback in the National Football League for 70 plays a game and making all of the right decisions and understanding defenses and where the ball goes sometimes can be tough.

“Some guys handle it extremely well. Some guys hit divots as they go. Some guys rise above it. That is OK. All of it is going to happen in a guy’s first year. I don’t look at what has happened to him as, ‘Oh, man, he has regressed or he is not doing this or he is not doing that.’ I don’t see that. I see a young man who is going through the process of trying to become a good quarterback in this league with a young football team. He is trying to help carry it, and that is tough. That is just part of it.”

Josh Gordon comes clean on history of drug use, wasted rehab trips, says he’s been humbled in Uninterrupted video
DeShone Kizer vows to come back as “best QB and best version” of self after demotion to backup behind Kevin Hogan