Notes: Myles Garrett wasn’t able to kick into “full gear” in debut but believes ankle will keep getting better 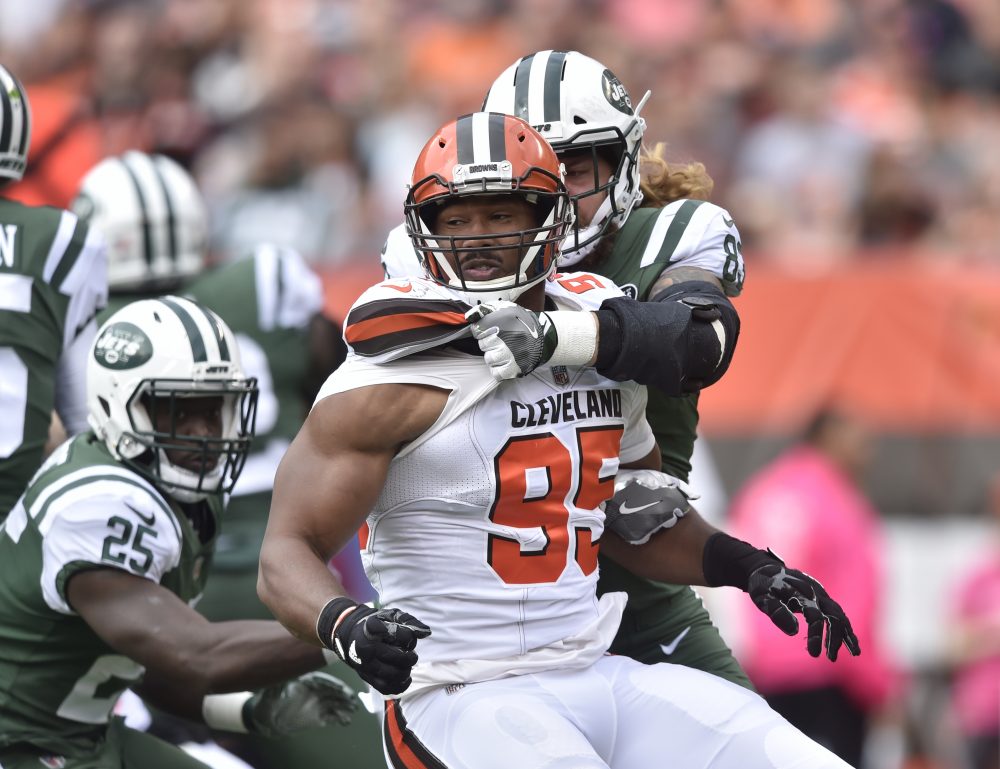 BEREA — No. 1 pick Myles Garrett had two sacks in just 19 snaps in his NFL debut but wasn’t satisfied.

The high ankle sprain that sidelined the rookie defensive end for the first four games limited his playing time Sunday in the loss to the New York Jets, bothered him in the second half and kept him from making at least one play he expects to make.

“It was hard to kick into full gear as fast as I wanted to,” Garrett said Wednesday, referring to an end-around in which the Jets player got past him and turned the corner. “Just knock some rust off some of the moves I did, work on my hands a little bit better so I can disengage and make sure I get to the ball every single time. There should be 11 guys in that picture every single time swarming the ball.”

Garrett’s first sack came on his first snap. He entered on third down, lined up inside and made New York’s interior linemen look silly as he blew past them.


“For us, that is just Myles being Myles,” rookie safety Jabrill Peppers said. “But for the people who haven’t gotten the chance to see him play, it is going to be something special.”

“We saw what he can do and once he gets back to 100 percent healthy we’ll see a dominant Myles,” end Emmanuel Ogbah said.

Garrett said his focus wasn’t on sacks but on making a difference. He expects his contribution to increase as the ankle improves after the first game action. He said it was sore in the second half but felt better by Wednesday. He was limited in practice.

“It should be a lot better this game,” he said. “I just expect it to get better and better.”

That should mean more playing time Sunday against the Houston Texans.

“If I have a good week of practices and it feels good, then I can give it more snaps, play a little bit more in the fourth quarter and bring more to the table,” he said.

Garrett and coach Hue Jackson said keeping the ankle loose during games by riding a stationary bike or moving around on the sideline should help avoid late-game struggles.

“He is much better this week. I think getting through the first week was huge,” Jackson said. “We are looking for more improvement, more time on the field and more time playing this week, and I think we will accomplish that this week.”

The juxtaposition is striking.

The Browns had the No. 12 pick but traded it to Houston in exchange for the No. 25 pick and a first-round selection next year. The Texans chose Watson, who won a national championship at Clemson. The Browns took Peppers at No. 25 and Kizer at No. 52.

Jackson was in no mood to discuss what might have been, including if Watson would’ve been the pick for the Browns if he hadn’t skipped the Senior Bowl where they coached.

“I get the second-guessing, the questions and all of that,” Jackson said. “DeShone Kizer is on our team. Deshaun Watson is on their team. We can’t all of a sudden flip them, so why are we having this discussion?

“It doesn’t matter. To go down that road and talk about this, that, what should have been and what could have been, that doesn’t do anything for anybody.”

Five players went on ride-alongs with police officers Tuesday in Cleveland and Shaker Heights in an ongoing effort to bring unity to Northeast Ohio.

The relationship between the team and police has grown since initial backlash for a dozen players taking a knee in a prayer circle during the national anthem before a preseason game. Before the season opener, the players were joined by members of the police, military and first responders as they ran out of the tunnel and stood for the anthem.

“I wanted to bridge that gap with what is going on,” linebacker Christian Kirksey said of the ride-along. “I feel like me getting into the community with the officers shows kids that officers are good.”

The demonstrations across the league during the anthem were started to bring attention to police brutality and social injustice.

“Our local law enforcement does a lot for this community,” tight end Randall Telfer said. “I wanted to show my appreciation but also hang out with them, talk to them and get to know them on a personal level.

“I did ask how they felt about player protests, and they did acknowledge that it was a right that players have, which they respected. There are a lot of people who obviously don’t agree with guys who are protesting, but to have the law enforcement not necessarily being on our side but to acknowledge and respect what the guys are doing, that was pretty cool.”

Jackson said he’d have a better idea Thursday about their status for Sunday.

“Hopefully, all these guys can make it back by the weekend. I think there is a chance,” he said.

Austin Reiter would likely start at center and Spencer Drango at right tackle if the pair can’t go.

“We hope that he can come out of it. He knows he needs to,” Jackson said. “He has to correct that as fast as he can because that is a huge piece of our football team and game.”

Lengel spent the second half of last season with the Patriots, including playing in their Super Bowl win. For the year, he had two catches for 22 yards and a touchdown.

** Offensive lineman Matt McCants was released from injured reserve, where he was placed Aug. 23 with an ankle injury.