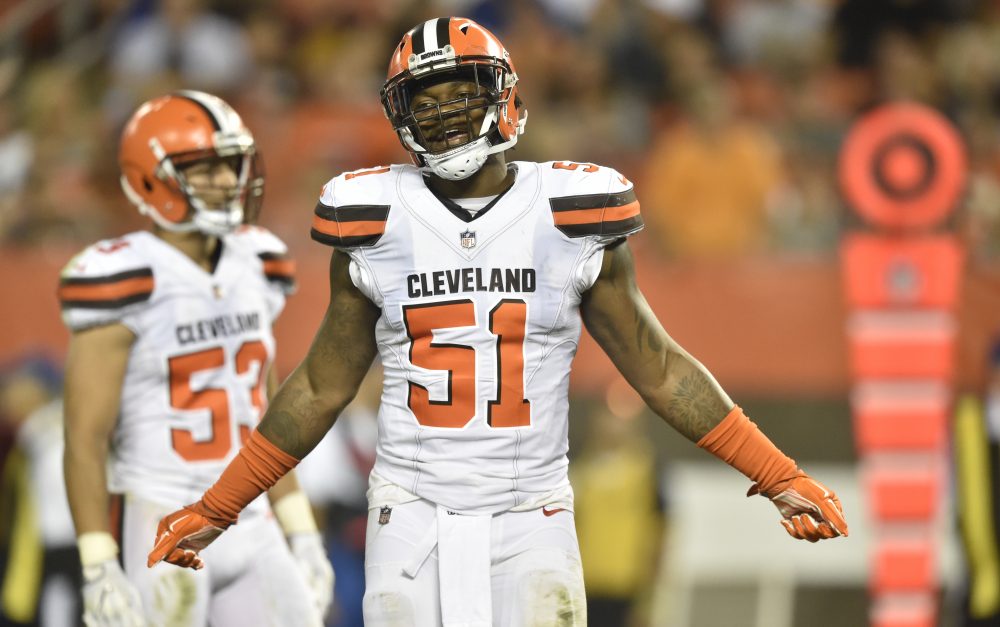 Outside linebacker Jamie Collins will return to the lineup Sunday against the Houston Texans after missing three games with a concussion. Despite the praise from his coach and teammates, he cautioned against expecting too much.

“Obviously I can help in many ways, but I’m not going to put myself as if I’m the player to make a huge difference or be a game-changer,” he said Thursday.

Collins returned to practice Wednesday, said he’s feeling good and hopes to set the right mood for a defense ranked fifth in yards allowed (304.8 per game) but tied for 25th in points allowed (24.8).

Collins was injured in the second half of the Week 2 loss to the Baltimore Ravens. He said it was his first concussion.

He said he got bored during the time off and missed being on the field with his teammates. They missed him.

“Jamie is a playmaker,” Kirksey said. “As you can see, just tracking his career and the numbers he has put up, all his accolades and going to the Pro Bowl, just being that playmaker and that ballhawk guy is definitely something that is good for us and definitely a good piece of our defense.”

“The guy knows football. He loves football,” cornerback Jamar Taylor said. “He is a playmaker, so it is going to be great to have him back.”

Collins returns a week after the debut of defensive end Myles Garrett, the No. 1 pick in the draft. They are arguably the two most talented players on the defense and will share the field for the first time in the regular season.

ONE OF A KIND

Left tackle Joe Thomas has been in the league for 11 years and faced countless pass rushers. He said Garrett is unique, and showed that with his two-sack debut against the Jets.

“Since I’ve been watching the NFL in the ’90s, I’ve never seen a player that plays like he does,” Thomas said. “He hardly played at all, he was playing on one leg and he had two sacks against a team that didn’t really hang onto the ball and throw down the field all that often.

“To be able to get sacks like he did is pretty impressive, but it’s not a big surprise for us on the offensive line because we’ve seen his ability week in and week out.”

The separator for Garrett is the ability to contort his body.

“It’s unnatural. It’s not something I’ve ever seen before,” Thomas said. “I’ve seen guys that can really bend very well, but nobody has ever been close to what Garrett can do. He can basically run full speed and take a 90-degree turn to his left or his right, and that gives you such an advantage as a defensive end it’s unbelievable. He can run just as fast turning and arching as he can running straight ahead, which is something that’s pretty rare.”

Receiver Kenny Britt’s tenure in Cleveland didn’t start the way he wanted, with critical drops and costly penalties in the first four games. Jackson said he might benefit from a “breather,” then Britt didn’t play last week against the Jets with knee and groin injuries.

The hope is the week off provides a new beginning.

“Having this bad start right now as I see it, it was good to get away, it actually helped out my body and mentally,” Britt said. “I believe it’ll be a fresh start.”

Britt returned to practice Wednesday and was limited the last two days. He said the groin began to bother him toward the end of practice Thursday but he’s hopeful he can play against the Texans.

“We’ve got Friday, Saturday and a little bit of Sunday morning to see how I go and I feel,” he said. “Hopefully this thing calms down so I can go.

“I’m on the fence right now. It’s day by day right now. Beginning of practice I felt ready to go.”

Coleman had a torn medial collateral ligament in the same knee in his final year at Auburn in 2015 and was still recovering throughout most of his rookie season last year. He was relieved this incident wasn’t a repeat.

“Just to be able to walk around and be able to go out there tomorrow and expecting to play Sunday is a big deal,” he said.

** Cornerback Jamar Taylor (ribs) returned to practice and was limited.

** For the Texans, outside linebacker/defensive end Jadeveon Clowney (knee), inside linebacker Benardrick McKinney (hip) and cornerback Johnathan Joseph (groin) were among those who didn’t practice Wednesday and Thursday, but coach Bill O’Brien said he expected them to play.

Notes: Myles Garrett wasn’t able to kick into “full gear” in debut but believes ankle will keep getting better
Notes: Jabrill Peppers moves closer to line, now he has to close with sacks