Analysis: DeShone Kizer should still be starting, needs chance to play himself out of struggles 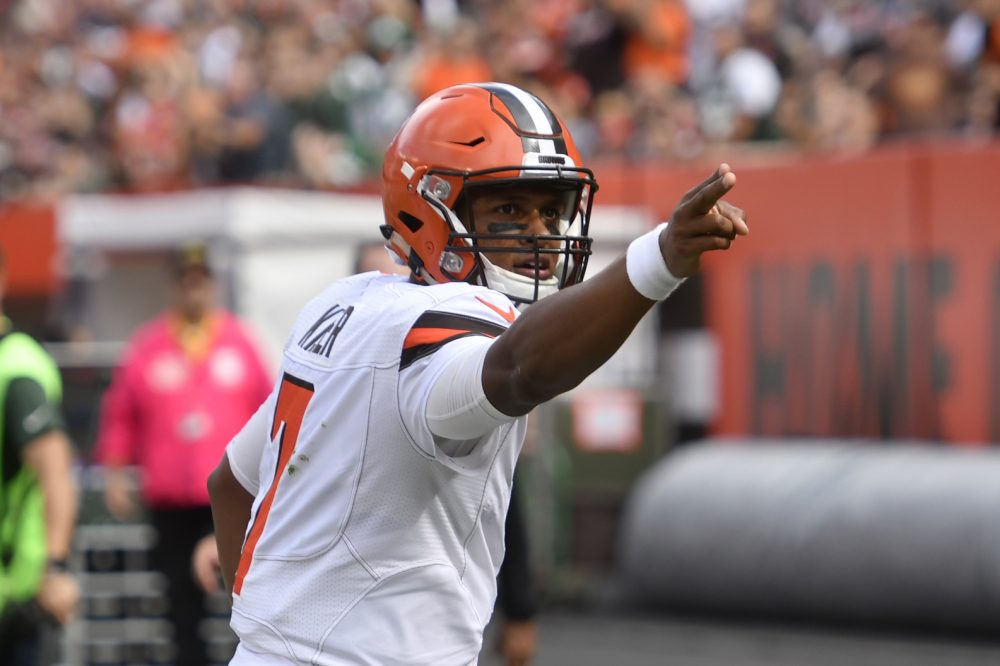 BEREA — DeShone Kizer will open the game Sunday against the Houston Texans standing on the sideline.

I understand coach Hue Jackson’s desperation for a win. I get that Kizer has 11 turnovers in five games. I recognize that Kevin Hogan has been better moving the offense.

I still don’t agree with benching Kizer at halftime of the loss to the Jets last week, or making Hogan the starter this week.

Since 1990, no rookie quarterback who started Week 1 has been benched faster without an injury, according to Elias Sports Bureau.

The conclusion is simple: It’s too early for such a drastic move.

Kizer was given the starting job in the preseason with the intention of playing him all 16 games. After five starts with mixed results — don’t let the ugly statistics completely overshadow the good throws, toughness and resilience — he should get the chance to play himself out of the rookie struggles.

That applies to the starting job and retroactively to the Jets game.

The Browns trailed 3-0 when Jackson made the switch at halftime. Yes, Kizer had two game-changing turnovers inside the New York 5-yard line. But he had led the drives to get that close and didn’t get any help from running back Isaiah Crowell on the botched option.

The game was within reach when he was pulled, depriving Kizer of the best chance to date for his first NFL win. A victory would do more for his confidence and future than time on the sideline.

This isn’t to say Kizer will turn into a Hall of Famer. Or that he’s been perfect. Or even good.

It is to say he hasn’t been as bad as the numbers and benching indicate, and it’s too soon to pass judgment. The best way to get him through the tough times and get an adequate evaluation is to get him as much playing experience as possible.

Jackson, the front office and the locker room knew there would be rough spots. Jackson said so multiple times. There’s no need to panic.

Having said that, Jackson’s desperation is completely understandable. He’s 1-20 with the Browns and keeping his job is reliant on winning games. Plus, the offense he designed and calls plays for has underperformed with Kizer.

But as much as fans might hate this reality — and I’ve ripped the front office for not making winning the priority — this season isn’t about victories. Especially at 0-5, it has to be about determining if Kizer can be a franchise quarterback.

He was the No. 52 pick out of Notre Dame, so the Browns aren’t deeply invested. They can draft another quarterback with a top-three pick in 2018 if they aren’t satisfied with Kizer, choosing among USC’s Sam Darnold, UCLA’s Josh Rosen and Wyoming’s Josh Allen.

Obviously there are issues.

He’s thrown a league-high nine interceptions and completed a league-worst 50.9 percent of his passes. Accuracy is the biggest concern moving forward, with experts split on whether it can be significantly improved once a quarterback reaches the NFL.

Let him play 16 games and see if the ball placement gets better. The game slows down with experience, so his reading of the defense and ability to get through the progressions will speed up. An increased comfort level should bring improved accuracy.

Kizer’s mental makeup also shouldn’t be discounted. He’s smart and confident and won’t crumble because of a rough start to his career.

He’s unhappy with the benching and believes he got better through the first five games. It’s a hard argument to make without putting up any points the last two weeks against the Bengals and Jets, but there were bright spots in the darkness.

When the first read is open, Kizer has let it rip and thrown well. After seven sacks in the opener, he was significantly better getting the ball out of his hand and avoiding the negative plays, with five over the next four games. Until the Jets game, many of the bundle of turnovers could be attributed to the receivers, miscommunication or desperation situations.

It can’t be denied the offense has looked better under Hogan’s direction, and he could very well provide a spark against the Texans. That doesn’t mean Kizer should’ve been benched.

He needs to be on the field to find out.