Notes: DeShone Kizer likely to get starting job back after 1 game on sideline 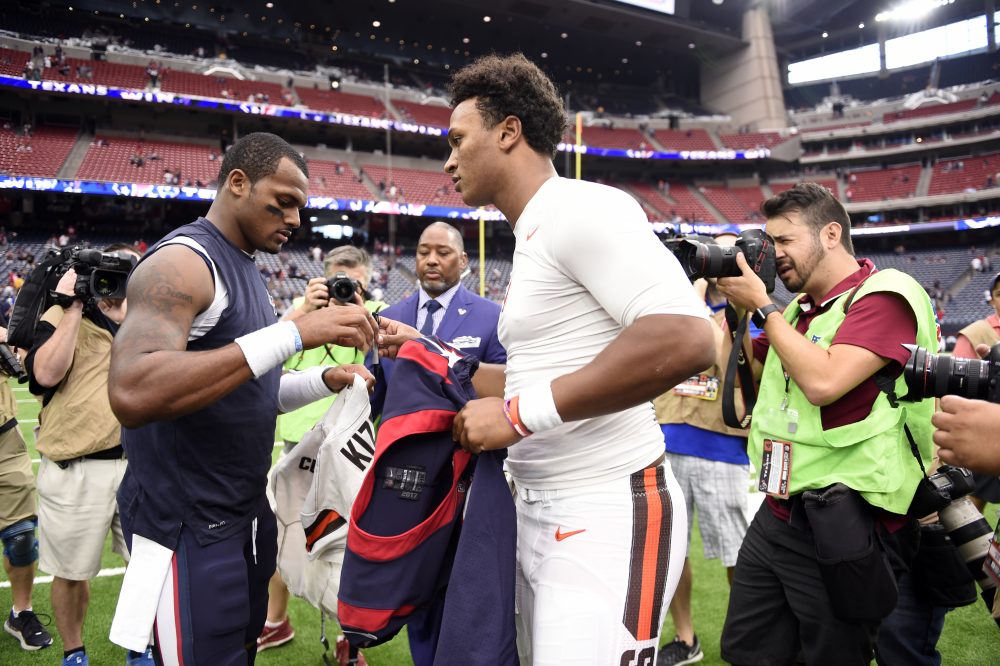 Rookie quarterback DeShone Kizer’s time on the sideline is likely coming to an end.

Coach Hue Jackson said he hadn’t made a final decision on whether to start Kizer or Kevin Hogan on Sunday against the Tennessee Titans, but he sounded as if he’s leaning toward going back to Kizer.

“Getting closer, but we will know for sure on Wednesday,” Jackson said Monday on a conference call.

Kizer started the first five games but was benched at halftime of the Jets game Oct. 8. Jackson named Hogan the starter against the Houston Texans, hoping he’d provide a spark and Kizer could learn from watching for a while after throwing a league-high nine interceptions.

Jackson was reconsidering after Hogan threw three first-half interceptions Sunday in a 33-17 loss to the Texans.

“I thought DeShone learned a lot of things,” Jackson said. “When you see some of the things that have happened to you in games and you can see it happening with somebody else that hurts your football team, you understand why you don’t. The turnovers are putting the team at risk. When there is a chance to score points and here comes a turnover coming the other way, it stops drives, and it doesn’t give your offensive football team the best opportunity to have success.

“Seeing some of the re-protection ID things that came up a little bit yesterday was very eye-opening to him, and I think it was a good experience for him.”

Going back to Kizer makes sense because the original plan was for him to play the entire season. The organization wants to see him for as many games as possible to evaluate whether he can be the long-term answer.

Although it was only a week, Jackson said that could make a big difference for Kizer, who is last in the league in completion percentage (50.9) and rating (49.5). Jackson said they talked throughout the game Sunday.

“He will be a little bit more team-protecting in situational football things,” Jackson said. “No. 2, I think he will demand more from the guys that play around him because I think he understands that every play matters and every play is a difference between having a chance to win or lose a game. I think he will be on top of those things.”

Rookie free safety Jabrill Peppers said the defense has been shooting itself in the foot all season and pointed to Deshaun Watson’s 39-yard touchdown pass to receiver Will Fuller on Sunday as another example. Fuller ran free on a corner route as cornerback Jamar Taylor let him go off the line and Peppers was way late getting over.

“All that was is a communication error. I was playing one coverage, and he was playing another,” Peppers said. “When that happens, not too many good things stem from that. That was a touchdown, and it just looked bad all around. As a safety, it is my job to correct whatever wrongs go on on the field. I will take that one, too.

The Browns have allowed 14 touchdown passes in the 0-6 start.

Receiver Kenny Britt was inactive for the second straight game after being listed on the injury report with knee and groin injuries. Britt’s poor performance to start the season may have contributed to the decision, but Jackson said the groin injury was the reason.

“I wanted to make sure exactly that he was totally healthy before we put him back out there,” he said. “That is exactly what played into that.”

** Jackson said there were no significant injuries sustained Sunday.

No. 1 pick Myles Garrett played 33 snaps against the Texans, half of the defense’s 66. He played only 19 the week before against the Jets in his NFL debut after missing four games with a high right ankle sprain.

Garrett had a sack, five tackles, a tackle for loss and three quarterback hits against the Texans. He also drew a holding penalty. He has three sacks in two games.

He led NFL 4-3 defensive ends in pass rush productivity, well outdistancing his peers, according to profootballfocus.com. He has nine quarterback pressures in 34 pass rush snaps.

Notes: Jabrill Peppers moves closer to line, now he has to close with sacks
Notes: WR Kenny Britt motivated to return this week, face team that drafted him