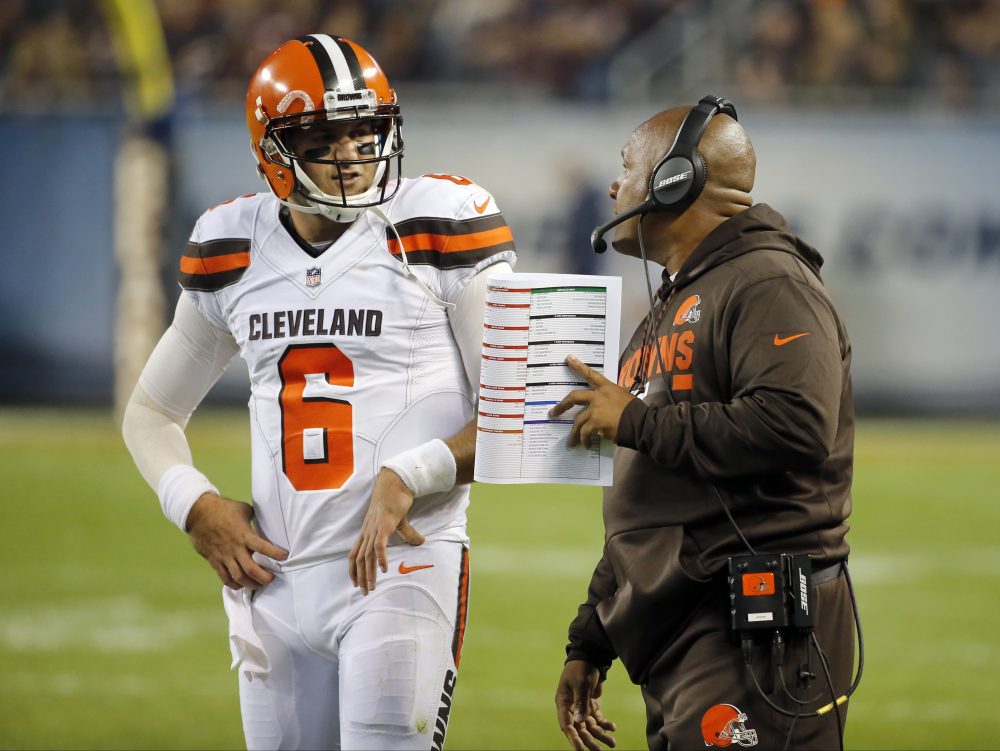 BEREA — Quarterback Cody Kessler is looking forward to wearing a uniform on a Sunday.

Kessler was inactive the first six games but will be the backup to rookie DeShone Kizer this week when the Browns host the Tennessee Titans. Kevin Hogan will be inactive after sustaining bruised ribs in the loss to the Houston Texans.

“To be active on gameday’s obviously going to be exciting,” Kessler said Thursday. “I’ll still treat it the same way as I have the last six weeks and preparing the same way and helping DeShone out and supporting him. But it will be nice.

“It’s the only thing I can do is to continue to improve and you never know what’s going to happen this week. You’re activated and maybe at some point you get an opportunity and you’ve just got to be ready and stay ready. I don’t want it to surprise me.”

Kessler opened training camp atop the depth chart but slid to third when the regular season began. He insisted he’s been able to cope with the demotion.

“Whether I am active, inactive, starting, third string, backing up or wherever I am, I am going to continue to support the guy that is in there and the rest of the team and keep working.”

Despite the setback this season, he said he still believes he can be a starter in the league.

“Absolutely. I have a ton of confidence,” he said. “It’s a sense of getting more reps, and even though it’s practice reps, you still learn more and more and continue to grow as a player in this league.”

Kessler was excellent at protecting the ball last year, but coach Hue Jackson wanted him to push it downfield more. Kizer has thrown deep plenty but has a league-high nine interceptions.

“He’s got a strong arm and he can make those throws and his biggest thing is knowing when to take that chance and when to check it down,” Kessler said. “It’s tough as a rookie. It’s something that you’ve really got to learn and it’s kind of a different speed in the NFL and something we all go through. But he’s going to be all right. You watch it and learn from it. He’s young.”

Hogan won’t be able to forget for a while the intentional grounding penalty in the end zone that resulted in a safety Sunday against the Texans. He suffered the painful bruised ribs on the play.

He hoped to be OK this week but the pain has lingered.

“Especially as a quarterback with the amount of twisting you do and your core movement, it’s definitely uncomfortable,” he said, stressing that nothing’s broken. “This is the first time I’ve ever felt anything like it and they say it’s kind of a week-by-week basis. So just trying to be smart about it.”

Hogan said if he had to play he could but understands Jackson’s decision to give him time to heal.

He would’ve liked a second chance after throwing three second-quarter interceptions Sunday in his first NFL start. He finished 20-for-37 for 140 yards, a touchdown, three interceptions and a 38.1 rating.

“Definitely disappointed. I felt like I could’ve done things better,” he said. “I wanted to go in there and try to get a win, but it didn’t go as I planned and I can’t do anything but get back to work and continue improving. So I made a lot of good strides this year, and I’m just going to keep building on those.”

With Kizer back in the starting lineup after a week on the sideline, the receivers must readjust to the zip on his passes. In his five starts, several passes went through, or clanged off, the hands of his targets.

“We’ve got to go on the JUGs (machine) and turn it up to 100 and just catch that and then it will slow down for us,” receiver Kenny Britt said. “He’s a young kid, and he’s just learning the game. In college, he can wait until his receivers get out of their break and make that up with his arm. Some quarterbacks tend to bring that into the NFL and you just see it sometimes. And there’s other times he’s releasing it before the receiver’s right there and it’s on time where it’s supposed to be with touch.”

Receiver Ricardo Louis said one of Kizer’s assets is his strong arm, and there’s no such thing as a ball thrown with too much velocity.

“You can never really throw the ball too hard,” Louis said. “First off, get on the JUGS if you want to catch the ball as fast as the machine can throw it. Which actually helps, which is what I’ve done, which has helped me to catch the ball from him.

“DeShone has a great arm, and that’s one thing I know for a fact.”

The Browns trailed 24-3 against the Texans when defensive tackle Danny Shelton shot into the backfield and dropped running back Lamar Miller for a 3-yard loss. Shelton got up and did a dance, ruffling the feathers of those who felt he shouldn’t celebrate a personal accomplishment in such a bad loss.

Jackson was fine with it.

“That is an emotional outburst. That doesn’t bother me,” he said. “I want our guys in the game to enjoy themselves when they are making good plays. I don’t think because a guy made a tackle for a loss he should sulk or be mad about that. That is a good thing.

“I am OK with celebrating after you make a play. We just want to make more of them and have more celebrations, but the biggest celebration we want to have is in the locker room after the game, after a win, a team win, where the Cleveland Browns have won.”

** Cornerback Jason McCourty (ankle) was added to the injury report as limited but is expected to be OK.

** Left tackle Joe Thomas (knee) practiced on Thursday the first six weeks after sitting out Wednesdays. He didn’t practice either day this week.

He said he’ll be “full go” Friday but needs an extra day of recovery after some games as the season wears on.