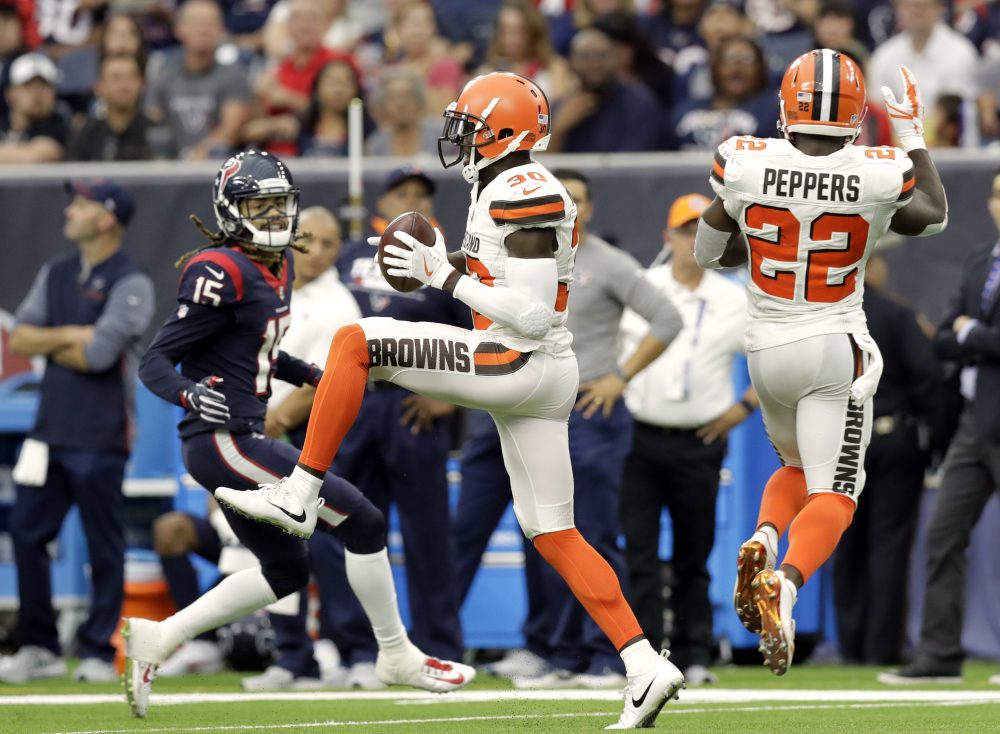 BEREA — What was supposed to be a big week for cornerback Jason McCourty looks like it will turn into a giant letdown for him and the Browns.

McCourty injured his ankle Thursday in practice, didn’t practice Friday and was listed as questionable on the official injury report. He didn’t talk to reporters Friday, a sign he isn’t confident he’ll be available to face the Titans on Sunday.

He was drafted in the sixth round by the Titans in 2009, spent the first eight years of his career with them before being cut in the offseason and was looking forward to the matchup.

“I’ve been extremely impressed with J-Mac. He’s been a huge help to our team, a veteran presence and he does all the things the right way,” middle linebacker Joe Schobert said. “So it’s painful to see a guy go down like that in practice and hopefully he gets better and be able to play this weekend. We’ll obviously miss J-Mac, but guys will step right in those shoes.”

Nickelback/safety Briean Boddy-Calhoun would likely start in place of McCourty. Mike Jordan would be the third cornerback and rookie Reggie Porter the fourth. Jordan has played six defensive snaps this season and Porter none.

He had a 56-yard interception return for a touchdown last week, the first of his career.

“We want McCourty to be there. He is one of our best players,” coach Hue Jackson said.

The Titans cut McCourty to avoid paying him a $7 million salary. He signed a two-year, $6 million deal with the Browns.

“That was hard to let him go with him being here as long as he was,” Titans coach Mike Mularkey said. “He has a lot of people here that respect him and loved having him as a part of this organization.”

Texans quarterback Deshaun Watson went 17-for-29 for 225 yards, three touchdowns, an interception and a 103.4 rating Sunday in a 33-17 win over the Browns.

Coordinator Gregg Williams maintained there were “an awful lot of good things” from his defense and pointed to pressure that forced Watson to release the ball quicker than he had been.

“Deshaun Watson had to throw the ball a full second faster than he has thrown the entire year just by our presence,” Williams said. “Sometimes it went to his people. Sometimes it went to our people. We had legitimately two more opportunities where the ball hit us in the hands, and we have to catch those balls.”

Titans defensive tackle Jurrell Casey (6-foot-1, 305 pounds) was second-team All-Pro in 2013 and a Pro Bowler the last two seasons. The Browns say the reasons are obvious.

“For a big man, he is extraordinarily quick,” left tackle Joe Thomas said. “He has a great ability to move laterally quickly and sort of teleport from one spot to the next right when you think you are about to block him.”

“Quickness. Explosive. Playmaker. Great anticipation,” run game coordinator Kirby Wilson said. “It is like he seems to know your snap count. He seems to know the blocking combination that is coming, and he has an uncanny ability of making plays behind the line of scrimmage. The guy is phenomenal.”

“He has great speed, 4.38 speed,” Tabor said. “He can go around the perimeter, but he also goes vertical. He kind of reminds you a little bit of a young Antonio Brown from the standpoint of that he can hit all field zones.”

** Rookie cornerback Howard Wilson, a fourth-round pick, is on the physically unable to perform list and was eligible to begin practice Monday. He didn’t practice this week, but Jackson said there’s a chance he could in the next two weeks before the window closes for a possible return this season.