Jim Ingraham: Browns are a mess, and things are only getting worse 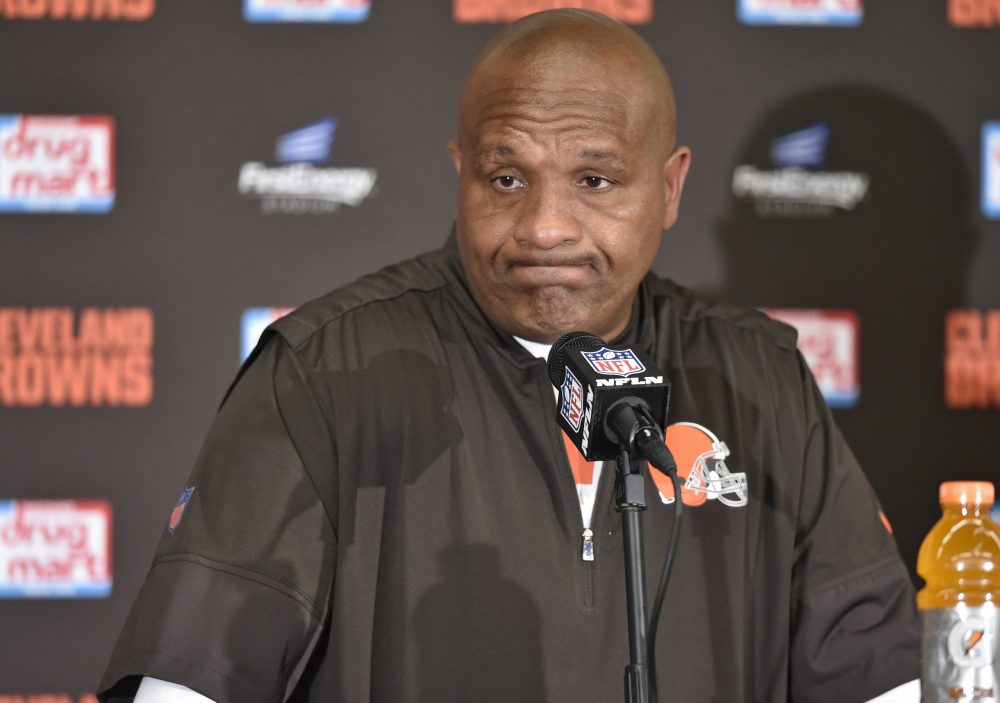 As the number of empty seats grows, the level of interest declines and the victory total remains the same, there is one bit of good news.

The Browns are leaving the country.

But don’t get too excited, it’s only for one game.


For the next week, they’re London’s problem, not Cleveland’s.

Maybe by the time they return, the Browns will have an offense the defense can be proud of. An offense that, you know, is capable of scoring a touchdown every once in a while.

Sunday, in an almost unwatchable, touchdown-less 12-9 overtime loss, the Browns offense scored no touchdowns — in five quarters. Four in regulation, plus one overtime period. That’s 68 minutes of play, and no touchdowns, while playing against a Tennessee Titans team that has allowed the second-most points per game in the NFL.

The punchless Browns have scored two touchdowns in their last nine quarters.

The panicky head coach/offensive coordinator has benched the starting quarterback twice in the last three games, and the quarterback didn’t play at all in the middle game of the three.

There is video of that starting quarterback at a bar at 1 o’clock Saturday morning, the day before he threw two interceptions and posted a quarterback rating of 36.2 before being yanked from the game for the second consecutive home game.

All that, and now indestructible future Hall of Famer Joe Thomas, who deserves better than having his name associated with this three-ring circus, is out with an injury.

London, they’re all yours!

The Browns finally get a big day from their defense, and the dumpster fire that is their so-called offense flares again.

And now the DeShone Kizer Project appears close to blowing up in the face of beleaguered head coach Hue Jackson. As if Jackson doesn’t have enough problems — speaking of dumpster fires — given his 1-22 record as coach of the worst team in the NFL, if not all of professional sports.

One of the red flags about Kizer coming out of Notre Dame was questions about his maturity. That won’t be helped by a Channel 19 video of Kizer at a bar at 1 a.m. Saturday, just a day before he was benched for the second time in three games.

“I’m not here to talk about my personal life,” said Kizer, when asked about the video after Sunday’s game.

That incident, coupled with injured receivers Corey Coleman and Kenny Britt missing curfew the previous Saturday night in Houston and being sent back to Cleveland by Jackson, not to mention 12 penalties called on the Browns on Sunday, raises questions about whether Jackson is losing not just games, but his team.

The Browns’ defense looked all in Sunday, playing their most spirited game of the season, which should have been rewarded with a win.

But the Browns’ offense, specifically Kizer, jumped the track. Kizer threw two killer interceptions — on his last pass of the first half and his first of the second.

It was then that Jackson told Kizer to take off his helmet and put on a baseball cap.

“We’re in the business of winning games, and if you turn the ball over in the NFL, you’re not going to play,” Jackson said. “I’m sure he is disappointed, but it works both ways. It’s about the development of the team, not one player.”

This is a sticky situation for Jackson, whose patience has disappeared the last three games. He’s trying to win some — any? — games to try to save his job, while also trying to develop Kizer. That’s pulling on opposite sides of the same rope.

So this is what you get. A team with a 0-7 record with a quarterback room that doesn’t include a single quarterback who has won an NFL game. And a coach who lacks enough hoses to put out all the fires around him.

Jackson is not completely blameless, of course. When your team is 0-7 this year and 1-22 in the last two, and your team looks this bad, maybe it’s time for the head coach to give up trying to do two jobs at the same time. Jackson should either be the head coach or the offensive coordinator — not both. It’s not working this way.

Spectacularly not working. The analytics-based decisions, the draft and most of the player evaluations have resulted in this chaotic stagger to 0-7.

All of it is bad … and getting worse.