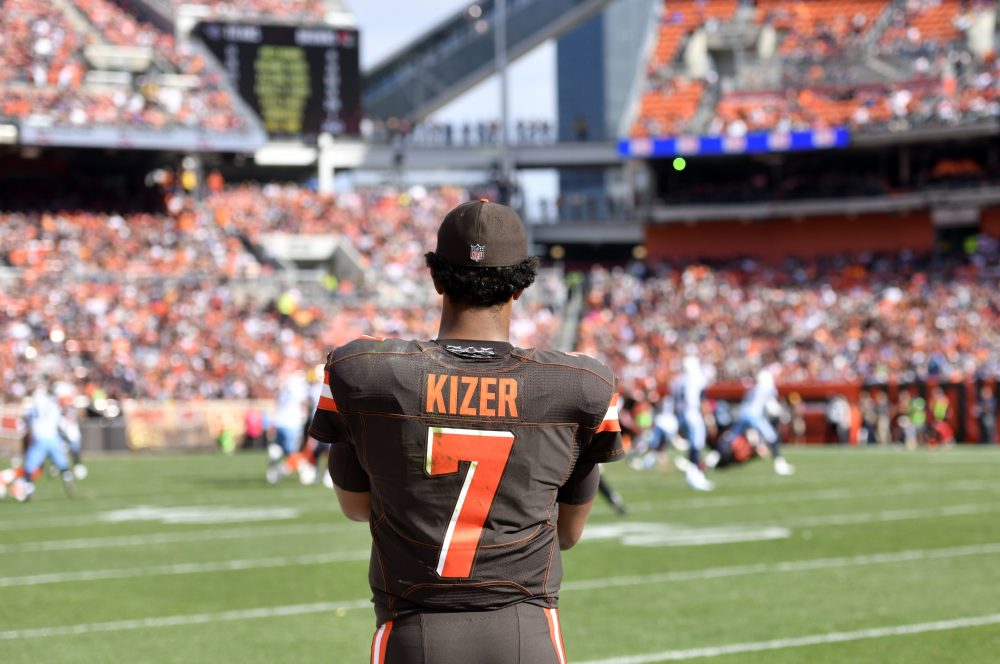 Jackson didn’t know about the video until asked about it Sunday after a 12-9 loss to the Tennessee Titans. He was caught off-guard and clearly upset.

“It means a lot to me,” Jackson said. “A guy’s personal time is his personal time, but I still think that is not what our guys do. I think our guys work at what they do, and I would be surprised if that happened.

“I don’t think DeShone has that kind of character or personality that way.”

During its pregame show, WOIO-TV Channel 19 showed video of Kizer standing and talking and said it was about 1 a.m. Saturday. The video appeared to be taken by another patron.

“I am not here to talk about my personal life,” Kizer said three times.

He was asked if being out that late showed a lack of commitment.

“Absolutely not,” he said. “I was out. I was at the facility the next day preparing for the game and the day right before that.”

The players don’t have a curfew during the week and aren’t required to be at the team facility until midafternoon on the Saturday before home games.

Kizer, 21, was back in the starting lineup against the Titans after being benched the previous six quarters. He talked during the week about a renewed commitment and increased motivation. He held a players-only meeting for the offense Friday at team headquarters.

He started well Sunday with six straight completions but was benched after two straight interceptions.

“I don’t think people should be going out and doing whatever,” Louis said. “I don’t think I would be doing that. I had no idea about that.”

Louis said Kizer did a great job in practice and meetings during the week and was prepared for the game. Louis believes the night out was a case of a rookie needing to learn priorities.

“Definitely. When you’re a young guy in this league, you have to find ways to mature, you need people around you to help you mature, to go through things to mature,” Louis said. “Preparation for success is this fine line, between things you can and can’t do. When you’re preparing to win, you’ve got to do everything right.”

Receiver Kenny Britt started against the Titans despite being sent home with receiver Corey Coleman, who’s on injured reserve, last week before the game in Houston after missing curfew Saturday night. Britt had two catches for 7 yards.

“We made a decision which we thought was best at the time,” Jackson said. “I think Kenny and Corey both understand where we are with both of them. We sent them home. They have been fined.

“Both of these players know that they have to continue to do the right thing. If not, we will see what the next consequence is.”

“I’m not going to hold grudges. You have to move on,” Jackson said.

The Browns were penalized 12 times for 81 yards, including four offsides on the defense, three of which gave the Titans first downs. Myles Garrett was called for two of the offsides, and Caleb Brantley and Danny Shelton one each.

“That we are undisciplined,” Jackson said when asked what the penalties say about the team. “That is a direct reflection of me, and it disappoints me to no end. Some of them we get called and I am just going to say it, I am shocked, but we will get the reports back and maybe we didn’t do this or do that.

“That is what it is, but I am disappointed as the head coach of the team that has had the penalties we had. The offsides, the holdings, the things on special teams, we have got to get that cleaned up. That was something we talked about all week so we are trying to emphasize it, but obviously, we aren’t doing it good enough.”

Garrett, the No. 1 pick, got his first NFL start in his third game. He went against Pro Bowl tackle Taylor Lewan and had four tackles and a sack.

Garrett was credited with a sack when quarterback Marcus Mariota went to the ground on what may have been a busted run play. Garrett joins Oakland’s Tommy Kelly in 2004 and Cleveland’s Barkevious Mingo in 2013 as the only NFL players since 2014 with at least one sack in each of their first three NFL games.

“He’s a great player,” Garrett said of Lewan. “He’s crafty, he’s a vet, so he knows how to change it up, he knows how to throw a variety at you and I’d like to go against him again.

“I didn’t do the best I should have, but that’s in the past and now we move on to London.”

The Browns were without No. 1 cornerback Jason McCourty (ankle) and rookie starting free safety Jabrill Peppers (toe), who were inactive after being listed as questionable. Peppers not playing was a surprise after he told reporters he expected to play.

Briean Boddy-Calhoun started for McCourty, and Michael Jordan slid into the No. 3 cornerback role. Ibraheim Campbell started for Peppers.

** Linebacker Christian Kirksey set a career high with 17 tackles and forced a fumble.

Notes: CB Jason McCourty doesn’t practice, could miss meeting with former team
Notes: Kenny Britt wasted a chance for redemption, but will he get another?