DeShone Kizer back as the starter, hopes to finish the game this time 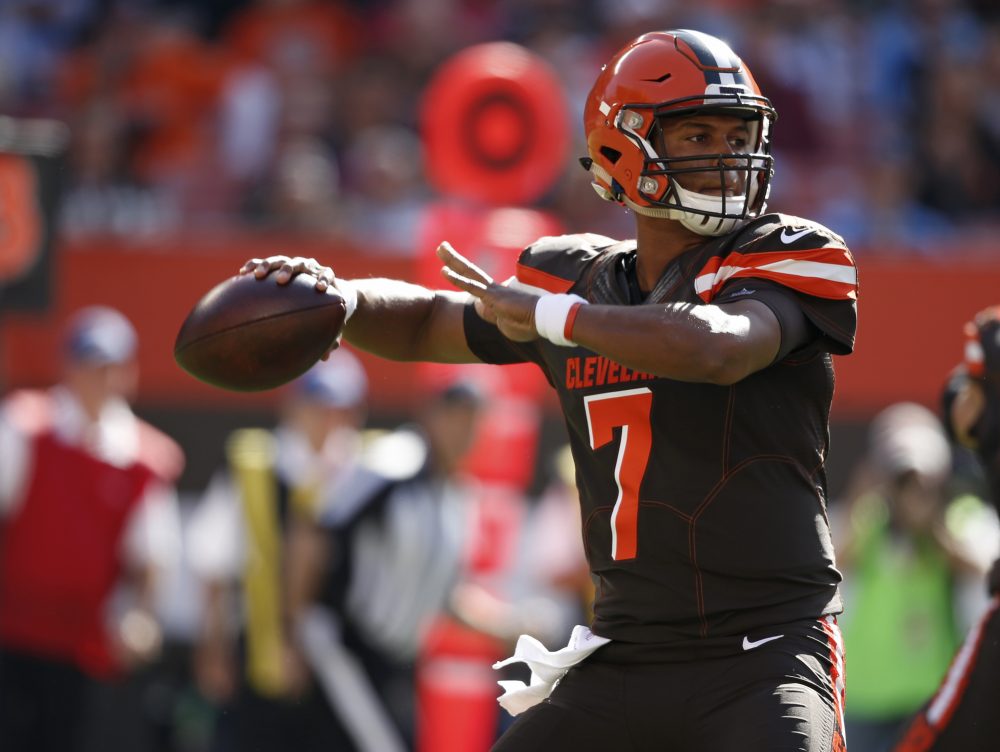 His goal is to finish.

“It is another opportunity to go out there and get it right for once,” he said Wednesday after coach Hue Jackson announced he’d start. “It is about taking these opportunities that Coach has been able to give me in a league where not a lot of guys get these and maximizing it for once.

“I feel like I am definitely getting better and I am on the path of evolving myself into a guy who can win in this league, but it is about eliminating obviously the turnovers and the plays that are stopping us from winning games and finally going out there and completing a game.”

Kizer, the No. 52 pick out of Notre Dame, hasn’t taken the final offensive snap in a game since Sept. 24 against the Indianapolis Colts in Week 3. He was pulled in the fourth quarter the following week to avoid further punishment in a blowout loss to the Bengals. He was benched at halftime the next week against the Jets after a pair of turnovers inside the 5-yard line.

He didn’t play at all the next week against the Texans, then was yanked Sunday in the third quarter of an overtime loss to the Titans after throwing interceptions on back-to-back passes.

“It has been a good three weeks since I have been able to go out there in the fourth quarter and attempt to win a game, and I am looking forward to having a complete game,” Kizer said.

Jackson picked Kizer over Cody Kessler, who replaced him against the Titans and will be the backup in London. Kevin Hogan isn’t on the injury report, but Jackson said he’s still affected by bruised ribs.

Jackson had a simple reason for going back to Kizer.

“I still think he gives us the best chance to win, but he’s got to play better than what he’s played, and he knows that,” he said.

The key will be avoiding turnovers. Jackson’s quick hook isn’t going to get any slower.

“I think DeShone gets it,” Jackson said. “I’m very honest with DeShone. This is a performance-based business and there’s some things that at the quarterback position are kind of non-negotiable for me, and he knows turning the ball over is something we can’t do. It hurts not just him, it hurts our football team.”

Hall of Fame quarterback Kurt Warner said on NFL Network the yo-yo with Kizer is hurting him and the organization. Jackson said he doesn’t care about any of the criticism.

“So people are going to say what they say, but nobody knows what goes on in this building and the conversations that are had with our players,” he said. “Unless a psychologist comes to tell me that DeShone’s going to fall apart or do something goofy because I’m taking him out, I don’t sense that.

“His job is to help this football team win. And if you’re doing things that don’t allow us to win, then it’s my job to make a decision to help, whether that’s sitting you down and putting somebody else in or stick with you.”

Kizer has thrown a league-high 11 interceptions and fumbled twice. He readily admits he needs to do a better job protecting the ball but said he won’t alter his style because of the threat of being benched.

“You don’t ever have to worry about me not bringing aggressiveness,” he said. “That is who I am. My instincts are always going to want to push the ball down the field, but also accepting that not putting the ball in harm’s way is the best thing for us. I think that up until that last throw of the first half in the last game is exactly who I want to be as a quarterback. The guy who is stringing together good drives, putting the ball in our playmakers’ hands and creating some positive drives for us to make sure that we can put ourselves in position to win a game.”

Kizer started the game 6-for-6 and was 12-for-18 for 114 yards before being intercepted at the Tennessee 7-yard line with 19 seconds left in the first half. That was the third promising drive, one of which ended with a 31-yard field goal.

The second pick to start the second half sent him to the bench, but Jackson isn’t worried about Kizer becoming timid.

“I don’t think he’s going to go play this game worried about, ‘Am I turning it over or not?’ I don’t think he has that kind of personality, or else I wouldn’t put him in that predicament,” Jackson said. “He understands he needs to play better that way and be ball-protecting. Last week he started off extremely well. He’s got to finish it that way. I’d like to have a game where we have no turnovers, period.”

During his week as the backup, Kizer was given a compilation of his turnovers to review on film. He said there wasn’t a common denominator among them regarding execution but they shared disastrous timing.

“You can go through each of those picks, and they are all very critical moments within the game that truly turns the game around,” he said. “After going back and re-evaluating that, it is more understanding that in those situations it is all right to take off and it is all right to throw the ball away.”

Turnovers aren’t Kizer’s only issue. He’s last in the league with a 52.0 completion percentage and 47.8 rating. The criticism has mounted, but he insisted he’s his harshest critic.

“There’s not a lot of guys out there who can hold themselves to standards as high as I hold myself to,” he said. “It has been pretty disappointing to have a start the way that we have had. My ultimate goal was to come here and win games for this team and represent this organization the right way, and I haven’t been on that path. It is about accepting what has happened in these first seven weeks and doing something different to change that.”

“He’s handled it well. Obviously there’s some bumps along the way, but I don’t think his confidence level has shaken at all,” Tretter said.

Joe Thomas heads into surgery with a smile; team says it was a success, full recovery expected
Notes: Myles Garrett misses another Big Ben: No. 1 pick ruled out for Sunday’s game, won’t make trip to London