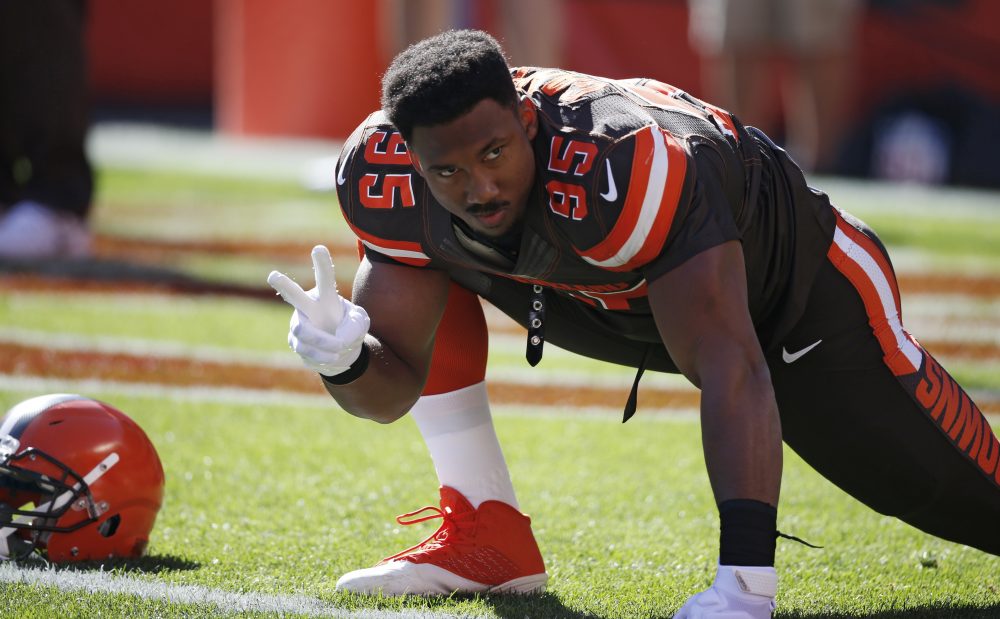 BEREA — Just when Myles Garrett got going, his season was stopped again.

Garrett, the No. 1 pick, is unlikely to play Sunday against the Minnesota Vikings in London after being placed in the concussion protocol Tuesday morning.

Garrett, a rookie defensive end, finished the 12-9 overtime loss to the Tennessee Titans on Sunday. He arrived at the team facility Tuesday and reported concussion-like symptoms. He didn’t practice Wednesday and remained in the protocol.

Coach Hue Jackson didn’t rule out Garrett for the game and would like him to experience the trip to London but said it had yet to be determined if he will fly with the team Thursday night.

“That would be great. But there’s different degrees of these things, and if the medical people say it’s best for him not to go, if it’s in that stage, then we’ll do whatever we think is best for the player,” Jackson said.

Garrett missed the first four games with a high right ankle sprain. He played the last three, recording a team-high four sacks. He’s tied for the NFL lead among rookies.

“Myles is a great player,” linebacker Christian Kirksey said. “We all can see that. He’s just coming off the edge, bringing the extra spark to the defense, being that guy that can go out there and make an impact play. That’s definitely something that we’ll miss.”

Carl Nassib started the first six games at right end before Garrett got his first career start against the Titans. Nassib, third-round pick in 2016, has 12 tackles, a sack and a pass defensed.

Garrett played his most snaps against the Titans, 57 of the defense’s 72 (79 percent). He had four tackles and a sack.

Jackson said he nor Garrett could identify the play on which the concussion happened.

“It came up a couple days after, which is different,” Jackson said of the symptoms. “Those things hit you like that sometimes. You don’t know, you think maybe you’re catching a cold or something like that, you look up, you’re not feeling well, wow, here it is.”

Rookie quarterback DeShone Kizer said he feels for Garrett having to deal with another injury so early in his career. Garrett also missed time with a high left ankle sprain in his final year at Texas A&M, and had a foot sprain during minicamp in June.

“A guy who’s come in here and done everything right since he’s been here, has had some bad luck and all I can do is as a teammate and friend just continue to encourage him and get back out there,” Kizer said. “Because he knows that when he’s at his best and when he’s 100 percent healthy, he’s one of the better players in this league and he’s only a rookie.”

The Browns have a bye following the trip to London, which should benefit Garrett.

“Myles, he has a positive attitude,” Kirksey said. “So it’s just a minor setback. I’m not worried about Myles mentally. I know he’ll stay in it. He’s grinding. It’s just unfortunate with the things that’s happening.”

“He was in good spirits,” Bitonio said. “Obviously he’s disappointed about the season ending and stuff. But for having surgery and being in that position, he’s doing well.”

Bitonio said he doesn’t know if Thomas will resume his career next season after the six-to-nine month recovery and rehabilitation period.

“You know, I’m not sure,” Bitonio said. “I know he loves playing football, I know he loves being part of the Browns and I think that’s a decision him and his wife are going to talk about, and his family. But I know he wants to help us turn this thing into a winner.”

Vikings coach Mike Zimmer said it will be different facing the Browns without Thomas.

“Obviously, Joe is No. 1 a great player. I know he has been really the pillar of that franchise there,” Zimmer said. “For anybody to play over 10,000 snaps and not miss any is really unheard of at any position, especially offensive line.

“He has always been a great player, a great person, a great competitor. I know all the times my teams have ever had to go against him we have had the utmost respect for him.”

NO TALK, NO START?

Apparently, receiver Kenny Britt didn’t want to talk about missing curfew in Houston and being sent home from the trip. Or being booed Sunday at FirstEnergy Stadium during player introductions and the game. Or the inability to catch a long pass in overtime.

Britt continues to be a huge disappointment in his first season with the Browns after signing a four-year, $32.5 million contract. He started against the Titans a week after the curfew incident and caught two passes for 7 yards to bring his season totals to 10 catches for 128 yards and a touchdown.

Jackson was asked if Britt will remain a starter.

“We’ll see. We’ll see where that is as we finish up during the week,” he said.

Matt Lengel was promoted from the practice squad, giving the Browns four tight ends. He took the roster spot that opened when Thomas was placed on injured reserve.

Lengel (6-foot-7, 265 pounds) appeared in six regular-season games for the Patriots last year and three in the postseason, including their Super Bowl win. He had two catches for 22 yards and a touchdown for the year.

He may be used as an extra blocker to help Spencer Drango, who’ll start in place of Thomas.

“We are looking for anybody who is long and strong and can hold some people out,” Jackson said. “Lengel fits that goal. We thought that was the best fit at this time for us.”

** Offensive lineman Victor Salako (6-5, 316) was signed to the practice squad. He’s an undrafted rookie out of Oklahoma State, where he started his last two years at left tackle.

Notes: Kenny Britt wasted a chance for redemption, but will he get another?
Notes: Myles Garrett misses another Big Ben: No. 1 pick ruled out for Sunday’s game, won’t make trip to London