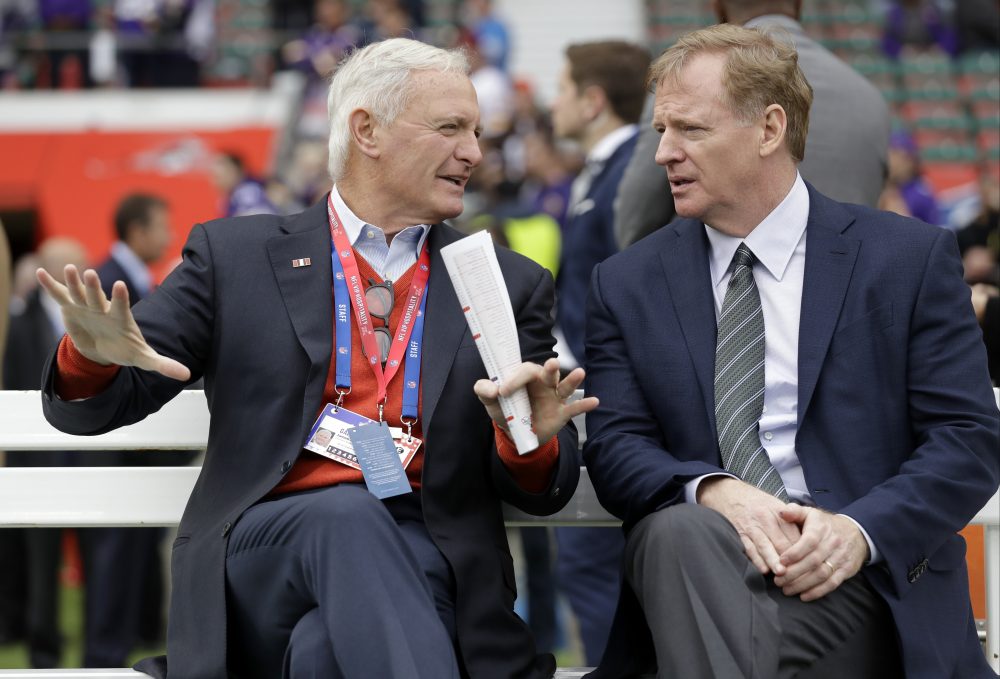 LONDON — Coach Hue Jackson believes he has the backing of the Browns ownership after the team lost its first eight games for the second consecutive year.

Jackson, whose Browns lost 33-16 to the Minnesota Vikings at Twickenham Stadium on Sunday, has overseen one victory since being hired prior to last season, a 20-17 win at home against the San Diego Chargers in Week 16. In all, the Browns have lost 34 of their last 36 games, beginning with a 26-23 overtime defeat to the Denver Broncos on Oct. 18, 2015.

“I totally have the support of (Jimmy and Dee) Haslam,” Jackson said. “I don’t feel any change in that. I know everybody is concerned about the losing, my job. I mean, there’s all kinds of questions out there. I get all that. That’s never been what my thought process is.”

Running back Isaiah Crowell’s 26-yard touchdown run marked the first time Cleveland opened the scoring this season, and the 13-12 halftime lead was the first it held at that point through eight games.

And rookie quarterback DeShone Kizer, in and out of the lineup this season, entered the game with a league-leading 11 interceptions, but did not throw one for the first time against the Vikings.

Those are little things that other teams may take for granted, but for the Browns, who have their bye next week, Jackson sees them as building blocks.

“We’ve got the second half of the season left, eight more games, and we’ve got to work at them.”

More from the Vikings’ victory over the Browns:

Wide receiver Kenny Britt, who was inactive for consecutive games earlier this month to rest injuries and because he was ineffective, dressed on Sunday but did not play.

Jackson did not elaborate on Britt’s status, though it’s clear that the 29-year-old, who joined the Browns prior to the season, has fallen to the bottom of the depth chart.

One player Jackson said he was pleased with, though, was left tackle Spencer Drango, who became the first to start at left tackle for Cleveland other than Joe Thomas since Dec. 31, 2006.

Thomas, who had started all 167 games since being taken third overall by the Browns in 2007 and had played every snap until he tore his left triceps last week, is on injured reserve.

Teddy Bridgewater should be ready to return from a torn ACL and a dislocated left knee when Minnesota resumes after its bye week. That will force coach Mike Zimmer to make a decision at quarterback for the NFC North leaders.

The Vikings traded for Sam Bradford after Bridgewater injured his knee on Aug. 30, 2016, but with Bradford recovering from his own longstanding knee injuries this season, Case Keenum has appeared in seven of eight games and started six.

“I don’t think too much about the big picture of things,” said Keenum, who signed with the Vikings prior to the season. “I take it a week at a time and I’m loving what I’m doing.”

Keenum completed 27 of 43 passes for two touchdowns and an interception against the Browns and his 63.9 completion percentage, while not among the league’s best, is the highest of his career.

“He’s been huge for us,” said tight end Kyle Rudolph. “He’s been extremely important. In the first eight games of the season, he’s won five of them for us. There’s a reason why he came here. He knew that at some point, maybe his opportunity would be called, and he has prepared for that each and every week.”

The Vikings will practice twice this week, then take five days off for the bye before reconvening the following Monday.

Vikings defensive tackle Everson Griffen tied a franchise record held by Jim Marshall and Jared Allen with a sack in his eighth consecutive game. He will look to reach nine against the Washington Redskins on Nov. 12.

“I’ve been working hard, but like I always say, I can’t do it without my defensive line,” said Griffen, who has 10 sacks this season. “It’s not only me back there getting the sack.”

Vikings 33, Browns 16: Cleveland leads in 2nd half, loses in London, falls to 0-8
Notes: Hue Jackson says “there’s a spot” for Kenny Britt despite being benched Sunday